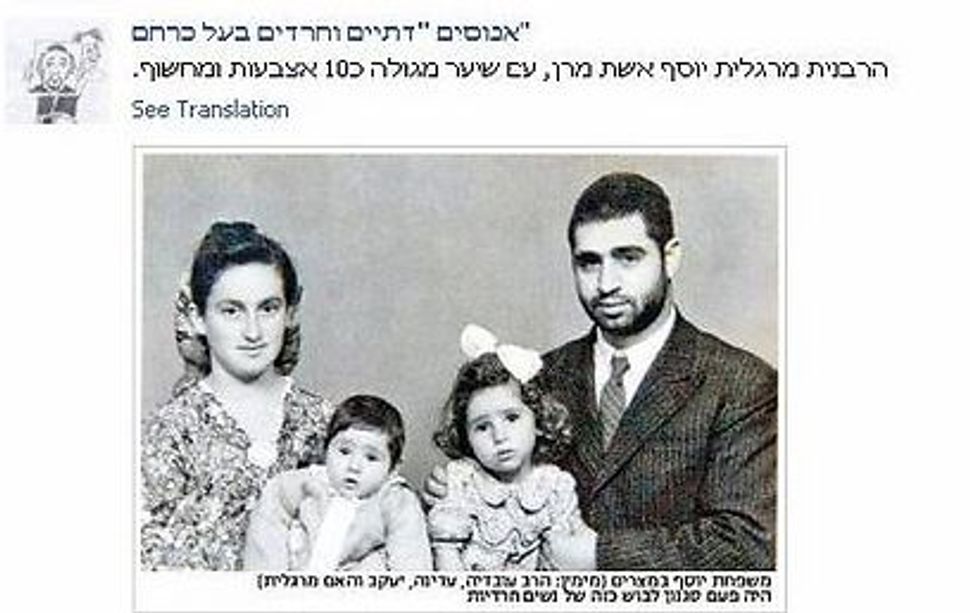 The Yosef family photo that is circulating in Israeli media.

The portrait of Rav Ovadia Yosef’s family that hit the web this week was surprising not only because it is rare example of the rabbi without his characteristic dark glasses and long dress. Most surprising is his wife’s apparel: her hair, neck and collarbone are all exposed.

There has been some speculating as to why the rabbi “allowed” his wife to dress this way, some six decades ago when he was chief rabbi of Egypt. However, according to the Jewish Women’s Archives, Yosef has always had something of a mixed record on women’s issues from an Orthodox perspective. On the permissive side, he ruled that women should have a bat mitzvah ceremony, can be radio broadcasters and even wear pants under certain circumstances. On the restrictive side, he has also made some outrageous statements, especially on the hair-covering issue, having announced several years ago that women who wear hair-like wigs instead of scarves and hats will burn in hell — or at least in the world to come — along with their sheitels.

Still, I think that this mixed record is not as interesting as the evidence of historical evolution. It is clear that the way his wife covered her hair back then is considered unacceptable today by his family and followers. In other words, times have changed, as tends to happen.

This point that rules of body cover have gotten more restrictive over the years should sound obvious to most of the American Orthodox community. A browse through the photo archives of any Orthodox synagogue in America will undoubtedly reveal bare-headed rebbetzins — even in sleeveless tops and short skirts. The Young Israel congregation in which I grew up used to line the lobby hallway with such photos. Today the neighborhood is dominated by black hats and wigs.

Indeed, social evolution of Orthodox dress codes — a process that happens in every culture that has ever existed — would not be such a surprising finding had it not been for the accompanying narrative of divine imperative. It’s because rabbis try to tell us that women’s head covering is God’s will. It’s also the entire deceptive discourse shrouded in the fallacious idea that this is somehow an immutable expression of divine law. As if. Clothing changes as do social sensibilities, and the Orthodox community ought to recognize that.

It’s not just that female body cover in Orthodoxy has evolved, but that it has become more and more extreme to the point of obsessiveness and even violence (see: Beit Shemesh). What we are witnessing in the Orthodox community is not the process of more people becoming more devout but rather more and more people becoming a bit crazy about the issue of female body cover.

All this raises the important question of why? Why is female body cover seen as the be-all-and-end-all of Jewish observance in so many circles?

I have some theories. One is that these are external identity markers, like a university sweatshirt, a way to easily identify one’s belonging to a group. It’s very comforting for people to have such a tight sense of allegiance. It helps people avert the insecurity that comes with having to walk through life on one’s own. In some ways it is the antithesis of loneliness and aimlessness, two very painful human conditions. So by putting on a particular uniform and living among people who all wear the same uniform and live by the same codes, one is able to live with a certain social comfort, the ability to wake up in the morning and know where one belongs.

There is also a particularly competitive dynamic in Orthodoxy that places a role. In my book, “The Men’s Section,” I wrote extensively about the “man-on-man gaze,” about the ways in which members of the Orthodox community watch and judge one another based on external markers like dress codes and time of arrival at shul. Clothing gives people an easy way to judge one another, and to judge where they are in relation to one another, even on such esoteric and seemingly personal issues as religiousness.

Finally, there is the obvious gender factor. There is an enormous desire in the community to control women’s sexuality and overall behavior. This is not all that different from dynamics in some other religions (Islam and the American Christian right come to mind). This is about men creating cultural rules for themselves based on how much control over they have over women in order to retain their own power and status quo. Perhaps it’s a response to women’s liberation. As Ahasverus said in the Book of Esther, the wrath of the King whose wife refused to obey him must be known throughout the land, “so that every man dominate in his household and speak according to the language of his nationality.”

When I think about Orthodoxy’s trend toward restrictiveness, I cannot help but worry about women’s lives. I just hope that images like this one of Ovadia Yosef’s wife showing some hair and skin will remind some people that the path to righteousness does not include controlling women.