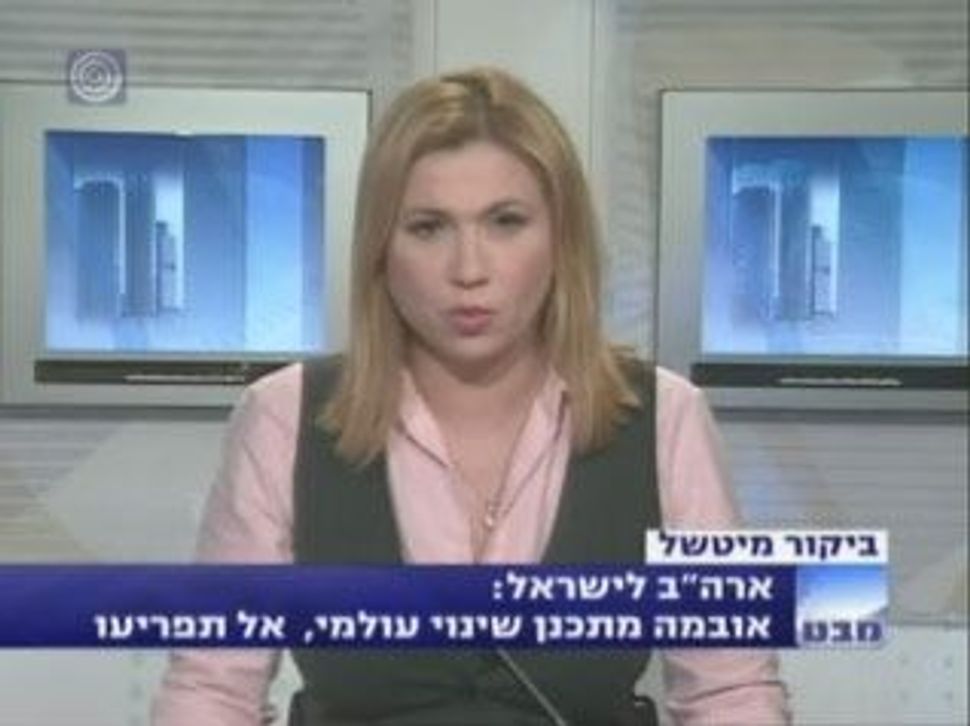 ﻿﻿Pretty women are like “candies” to their male bosses, and if they are sexually harassed, the pretty women should switch jobs rather than ruin the careers of high-powered men who can’t control themselves. This is the infuriating opinion expressed last week by leading Israeli current-affairs radio presenter Ayala Hasson.

The conversation took place during Hasson’s radio program in which Hasson described a case that took place at a leading government office in which a woman who was sexually harassed by her boss was “discreetly and quietly” removed from her position and given an alternative post. “He wanted her like a lovely piece of candy,” Hasson said. “Every time he walked by her, there was a little pinch on the cheek or something.” Hasson argued that this is an excellent solution because, this is the only way to protect the man from getting into trouble (histabchut).

This entire discussion occurred against the backdrop of new sexual harassment charges from the Prime Minister’s office. According to reports of the State Comptroller Micha Lindenstrauss, a woman known only as “Resh” was sexually harassed by one of the leading aides to Prime Minister Binyamin Netahyahu, Natan Eshel. The accusations are pretty serious: Eshel is said to have been obsessed with R., who was working directly for him, not only by stalking her and spying on her, but even strategically placing cameras where they could photograph under her skirt. Three members of the Netanyahu’s senior staff filed complaints with Lindenstrauss — apparently unbeknownst to one another — and another four staffers have already given testimony on these events.

What is particularly outrageous about this discussion is that promoting consideration for sex offenders and punishing the victims is an argument that comes from someone who really ought to know better. A high-profile, high-powered Israeli woman, Hasson is part of the class of influential media personalities — not too different from where Shelly Yachimovich spent the period of her life right before she got elected to the Knesset, where she is now head of the Labor Party.

It gets worse. Prof. Orit Kamir, a frequent commentator on the status of women in Israel, was also interviewed on this program, and tried to talk some sense into Hasson. But when Kamir suggested that removing beautiful women from their jobs is a form of exclusion not too different from the exclusion of women that the Haredi world promotes, Hasson exploded in laughter, as if this was the funniest thing she had ever heard.

And Hasson is apparently not alone. Political commentator Hannan Kristal joined the show and added that beautiful women should be removed because it’s like removing obstacles in front of a blind person, since it is impossible to expect a man in a senior position to change his behavior. To this, Yossi Levi, Netanyahu’s former media adviser, offered kudos to the PM’s office for doing just that, and averting a media disaster and saving Natan Eshel’s career. When Kamir pointed out that according to this thinking, Katzav’s rape victims should have been fired, this trio of commentators did not see the connection.

There is a very big problem here. Kamir commented in her blog:

This is a shocking story. It illustrates the systematic exclusion of women from workplaces in Israel. It illustrates how the elite cliques work behind the scenes to bring women down, to prevent equal opportunities, and to block women from advancing. It illustrates exactly what sexual harassment looks like, how widespread it is, a daily occurrence that is institutionalized. And it illustrates what sexism, chauvinism, and blaming the victim look like.

But it’s even more outrageous that Ayala Hasson did not tell this story in order to shock her audience, to expose corruption, or to raise awareness. She told the story in order to demonstrate how a systematic problem that ought to be scandalous can be silently dealt with, quickly and efficiently. It did not occur to her for even one second that there is something wrong with this behavior, which excludes and discriminates against women.

Kamir concludes from all this that there is a deep social-cultural problem in Israel when it comes to the issue of sexual harassment. “We need some profound and thorough educational work, not only among haredim but among the so-called ‘enlightened’ among us’.”

I fully agree. The exclusion of women is a society-wide problem that starts with a lack of awareness and understanding about women’s basic rights not to be harassed.