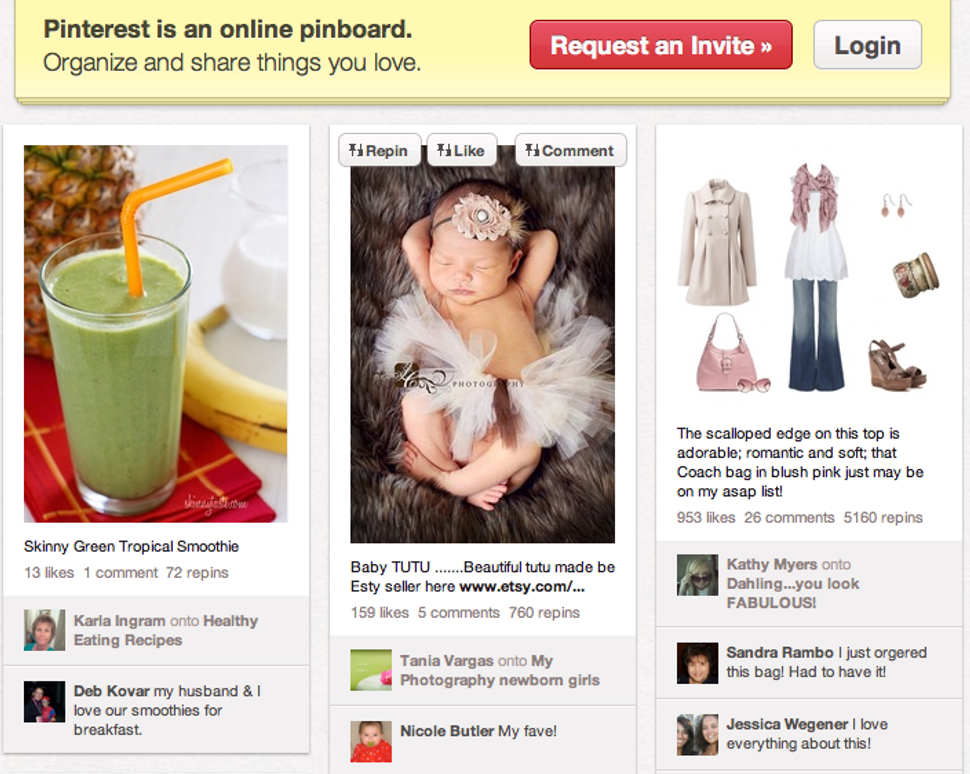 It’s supposed to be the guys who get turned on by images. We ladies are more evolved, more sensitive, more verbal, less dependent on pictures to trigger our fantasies.

Or are we? After all, young girls are are the bulletin board queens. In our teenage bedrooms, many of us taped up pictures and posters of our idols and role models. In the past, there were “‘hope chests,” and even now, some women clip pictures for their dream wedding for when the time comes. When the female-centric book “The Secret” came out six years ago, ‘vision boards’ were all the rage. They were supposed to hang in front of our desk, right in our line of vision, with pictures of our goals — our dream job, our dream house, inspirational phrases — so that what we were working to accomplish stayed in front of our eyes all days. And let’s not forget the hobby of scrapbooking. Have you ever met a man who scrapbooks?

Now some young genius has come up with Pinterest, which is rapidly becoming the next big thing on the Internet. I’m talking, Pinterest lets you maintain virtual ‘boards’ on different topics and ‘pin’ links onto them. The official term is “theme-based image collections.”

In what appears to be a first for social media, Pinterest is being pioneered by hip college students nor techie young geeks. Women rule the Pinterest universe, at least for now.

An estimated 80% of users are female, and more than 90% are over the age of 24. And yet, it has exploded, ramping up to 10 million visitors faster than any other site in history, and media companies, advertisers and marketers all have their eye on it as the next big thing.

Essentially, everyone gets to be Oprah and share their ‘favorite things.’ The dominant categories are fashion, accessories, food, home decor, parenting – the stuff of which women’s magazines are made. Washington Post columnist Petula Dvorak called it “digital crack for women.”

As I look at the Pinterest boards, I ask myself whether women are primarily pinning pictures that really reflect what’s going on in their lives or what they wish their lives were like? Because real life just isn’t as pretty as most of the Pinterest images.  I’ve got a mental picture of a frumpy unkempt woman in sweats sitting in the midst of her messy house eating fast food, pinning up images of slender fashion models, and decorating ideas for an immaculate mansion and elaborate gourmet recipes.

For some answers, I consulted with my friend Ellen Stanclift, a hardcore Pinterest user, who maintain more than 30 boards. Some of them are devoted strictly to images of a certain color, one for the house of her dreams, one for beauty products, one for books, one for pictures of snow, and one devoted to ‘fascinators’ – the silly headgear worn by the British at royal weddings.

She says for her, and, she believes, many users, Pinterest serves a dual reality and fantasy purpose. Someone who cooks, for example, is likely to pin both practical recipes they might really cook for their families, as well as complicated gourmet fare from five-star restaurants that they would like to have the time, energy, skill and budget to make. Or a woman who is redecorating her living room will pin both practical and affordable ideas to her board — as well as elements that could be far out of her price range.

The business world is watching and waiting to see whether Pinterest comes close to the commercial success of Facebook and Twitter. But it will also be fascinating to see how Pinterest develops. Women easily followed men into blogs and social networking sites like Twitter and Facebook. Will it work the other way around? Will we soon see multiple pinboards featuring sports heroes, bikini models, and techie gadgets? Or will Pinterest remain the pink-collar girly ghetto of the Internet?