On Covering War — as a Young Mother 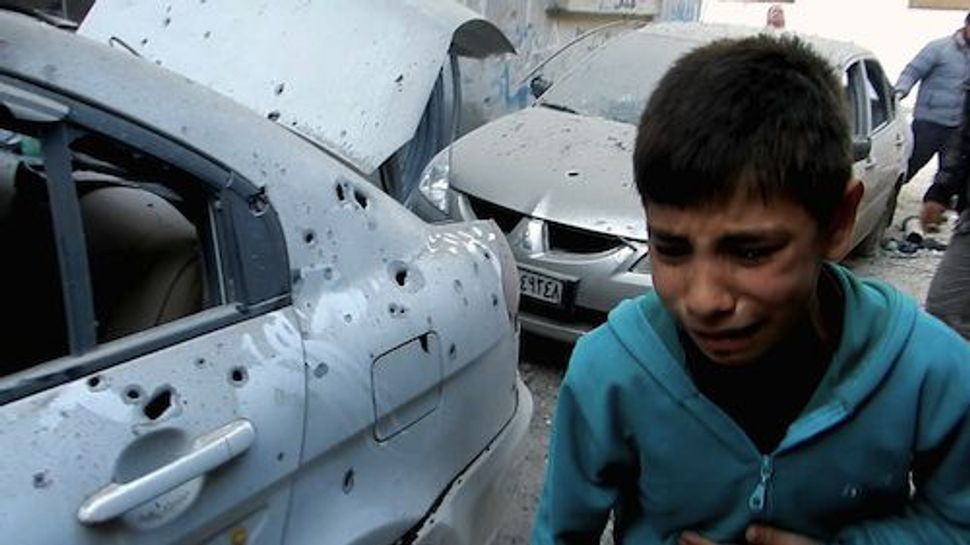 The besieged Syrian city of Homs, where Marie Colvin was killed. Image by getty images

I never met Marie Colvin, the intrepid war correspondent who was brutally murdered by Syrian army shelling. But I used to fantasize about being like her. Scratch the surface of any journalist and you’ll find someone who was once intrigued by the vision of living dangerously, moving from trouble spot to trouble spot, always in the middle of the action, bravely shining a light on injustices across the world. The classic foreign correspondent swashbuckler icon may be male, but since there have been numerous examples of women in battle zones.

I have incredible respect and admiration for friends and colleagues who cover not only the Arab-Israeli conflict from the comfort of Jerusalem and Tel Aviv offices, but hop in and out of Egypt, Libya, Lebanon and Iraq, despite the ongoing dangers. I’m not one of them. It is a rare creature who has the ability to run towards danger and risk, and not away from it.

My friend Stephanie, a television correspondent who has been covering the Arab Spring across the Middle East is one of those brave people. I interviewed her long-distance — she is currently on the Lebanon-Syrian border, covering the bloody Syrian crackdown on anti-government protesters. We agreed that I would not fully identify her or the news organization she works for, in order to protect her safety and allow her to speak freely about her experiences.

Allison Kaplan Sommer: You knew Marie Colvin. What was she like?

Stephanie: I met Marie in Libya during the war In Tripoli after Khadafi fled.  We saw each other at the hotel, in passing and eventually chatted a bit. I noticed the eye patch right away, of course, and wondered what had happened but didn’t feel right asking anyone and certainly not asking her.  What struck me about her was how very forthcoming she was. I needed contacts for a fixer in Tripoli and, knowing her background and whom she wrote for, was surprised to discover there wasn’t pretense.

She was on an online forum of war zone journalists I belong to and she messaged everybody to say she had made it into Homs.  She was so excited and glad to be in — it takes quite a bit of effort to get there.  She also wrote about how horrific it was in Homs/Baba Amr district. To ensure that the word of the atrocities spread far and wide, she copied and pasted the article she wrote for The Sunday Times on the forum site — an article which readers pay to see online.  She felt so strongly about what was happening there, that she wrote she’d take the heat for going over the pay wall and sharing the story.

What is it like being a woman reporter in such a risky environment? How do you balance personal safety with getting the story?

I guess I don’t think of myself as a woman reporter but obviously I am and it comes up when I’m in certain situations. Like when our hotel in Tripoli was being stormed by protesters and the staff (men) didn’t want me to go out into the mayhem, but at the same time were allowing my male colleagues passage.

I was furious and insisted upon going out — it’s my job, after all. I think about rape and ruminate over the ‘what ifs’ of being captured. Sometimes I work with male cameramen specifically because in case of capture I hope a code of honor between men will prevail and I won’t be raped — only groped and maybe beat up like other female colleagues have been.  That sounds ridiculous but it has been the reality of others.  I take a headscarf for specific encounters — interviews with military leaders in conservative Muslem towns, for instance — and I know I can’t go out in public on my own in some venues, a male must accompany me. Covering Tahrir Square, for instance, I only agreed to work with male Egyptian camera crews who speak the language.

I have been groped in public places and I’ve been in precarious situations safety-wise.  I don’t share this with my editors and I definitely play down the danger element because I don’t want to be barred from going on the basis of gender.

Safety-wise I do what I can to get educated about where I’m headed, what the risks are, what sort of evacuation plan can be put into place, if any.  In Syria, for example, there’s no evacuation which is why it’s a super-risky place to cover.  I buy warzone insurance each time I go to cover a war and I opt for the premium to be paid to my son in the event of my death. … Sometimes I have personal protection (i.e. bodyguard) and in March I’m joining a hostile environment training course in the UK that includes emergency first aid for war zone injuries.

You are not only a woman, but also a mother. Do you think society judges women and mothers more for taking these risks than they do men – is there a double standard?

I absolutely do think women and mothers are judged. I saw it in comments sections of articles written about Lara Logan after she was attacked in Cairo. There were very negative comments about her choice to work as a reporter covering volatile areas while being a mother of two. It surprised me because I felt she was doing what she loved and there was no legitimacy in her being attacked brutally. The comments carried a sort of “that’s what you get” air, but at the end of the day she was bringing the story home to those commenting television viewers!

I had a rather heated debate with a colleague who emphatically stated that my responsibility is to my child and so I shouldn’t be doing what I do for a living. De facto. The deputy bureau chief of a well-known international agency told me he thinks women shouldn’t cover war — period.  He himself covers war zones but said he simply believes that the same rules of war — protecting women and children — apply to covering war: men in front, women and children at home.

I argue that this is my passion and I want to teach my son by way of example to follow his passion, even if he thinks it might involve great risk.  I want to teach him not to be afraid although I think fear is absolutely healthy sometimes, especially in my profession.  But I also do what I do for a reason. I lose sight of that sometimes — like during the past few weeks when Anthony Shadid died of an asthma attack in Syria, Marie and Remi were killed, and the other two journalists are still stuck inside Homs without a way to get out. It is terrifying and has sparked tremendous dialogue and debate among the fellowship of journalists. Some are even posing:  If dying means  you are no longer able to get the message out, how can it be worth it?

I’ve heard some say in the eulogies for Marie Colvin that women make better war correspondents than men, because they are able to deal with the stresses better. Do you agree?

I don’t think I’d draw it along gender lines.  I’d say it comes down to personality, professionalism, how a person handles pressure.

We all handle the stress differently and we all crack sometimes. A camerawoman I worked with nearly went running from a Tripoli morgue in horror while shooting a story on mass executions in Libya.  I wasn’t affected in the same way.  A cameraman felt sick after shooting wounded Syrians in the hospital.  Again, it didn’t get to me in the same way.

But I was deeply moved by a story about men being tortured and then locked in a shipping container in the Middle East summer sun, left to die. Survivors said they had beaten the sides of the container begging and crying to be released to no avail.  Also, seeing soldiers who had set out for the day’s battle with cheers return to the base downtrodden and sobbing over the loss of a fellow brigade member was tough to witness. Some have a deep belief in bringing stories to the world that otherwise won’t be told.  Others are, quite frankly, adrenaline junkies who roll from one war zone to the next.  Some are wannabe soldiers who are out there to grab hold of glory they may have missed when dismissed from the military.  I’d have to say that the latter two categories are, fortunately, not hugely prevalent and they’re not generally the people who seem to last a long time doing this.

On Covering War — as a Young Mother