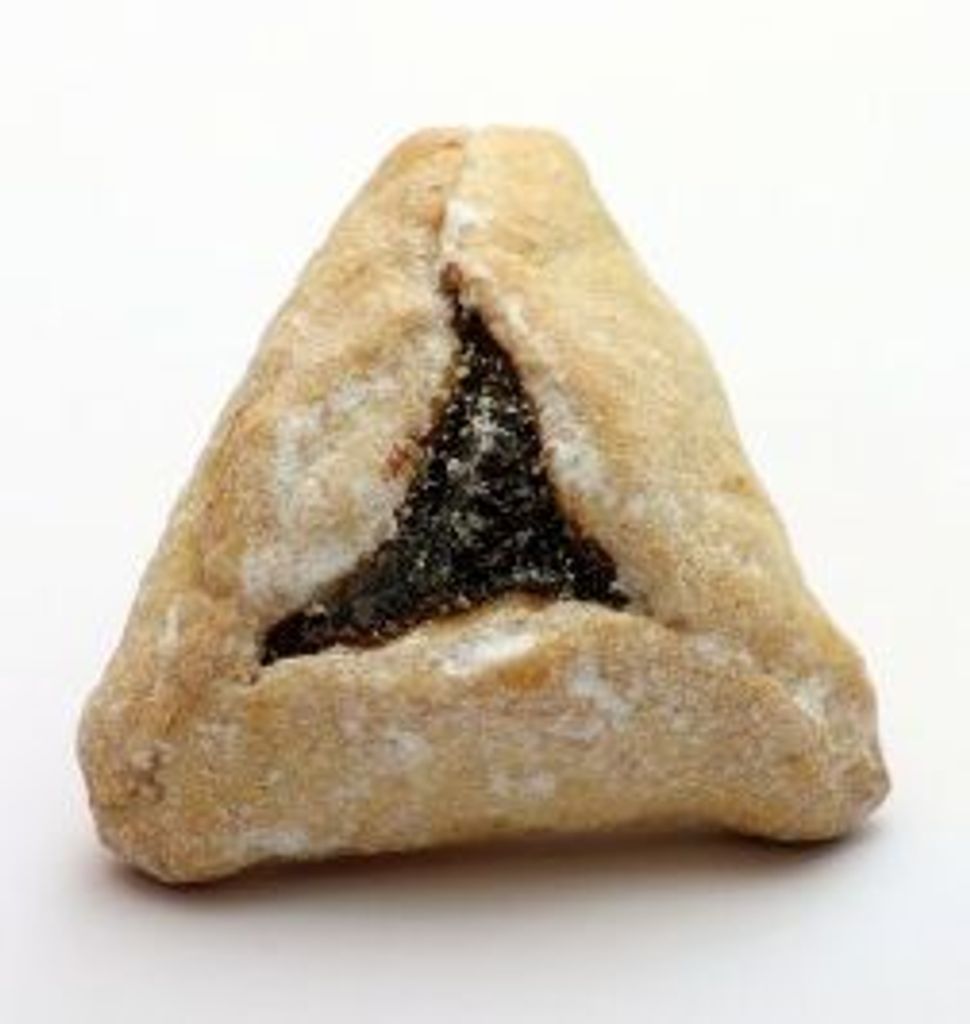 Hamentasch: A sweet representation of evil. Image by istock

As she excitedly recounted the Purim story, I realized I’d approached a rite of passage in modern Jewish parenthood that’s right up there with wincing at a bris and trying to make Hanukkah something more than a tsunami of presents. It was, of course, the dilemma of how to teach kids our often difficult and scary religious tales, of which Purim is probably the most difficult and scary.

And I’m not talking about the whole minefield of problems like the sexism in the Vashti scene, the valuation of female beauty in the Esther thread, and the bloody revenge levied against the Jews’ enemies — to say nothing of the super scary part about the genocide plot, which was thankfully left out of my daughter’s introduction to the holiday. No, at this point I just mean the simple idea of there being Bad Men, like Haman. Of course, there are bad people in the world. But is that something that toddlers who have never heard of them need to learn?

Lest I seem like a spoilsport, let me say that I’m all about Purim: the costumes, the partying, the poppy seed hamentaschen. But witnessing my daughter’s ultra-spongy consciousness absorb the fundamentals of the Purim story, I had to wonder if we were headed down a slippery slope. Was this the very moment she was being queued up for the great Us vs. Them narrative of the forever embattled Jews and all our ensuing psychological trauma?

So I asked some friends and acquaintances for tips on teaching very young children about Purim. Is there a non-scary way to talk about Haman? Do you change the story? Leave him out entirely? One friend pointed me to the highly entertaining Purim video presented by “Shalom Sesame,” which winningly explains Ahasuerus’s attraction to Esther based on their mutual love of riding bicycles. Haman is still described as a “wicked man,” although he plots not to murder the Jews, but to “send them away,” a threat that seems only mildly frightening coming from a bug-eyed Muppet.

Another person directed me to the awesome G-dcast video about Purim, with the caveat that it’s probably better for 8-year-olds than, say, 4-year-olds. The video features Esther as a kind of cool, urban icon of girl power, although Haman is still a clearly bad dude who wants to kill the Jews — probably not something to be shown to preschoolers who haven’t heard of death yet. Another friend recommended the Purim resources available through a program called Gateways, and while they do a wonderful job simplifying and conveying the story, Haman is still cast as an angry, murderous man. Yikes.

Perhaps the best advice I got was from a friend who creates and performs brilliant puppet shows for kids. In her Purim show, she said, she doesn’t describe Haman as a bad man, but rather as someone who cared only about himself, didn’t share and said mean things. In other words, someone who acts like all of us, including children, do sometimes.

So when I go to hear the Megillah with my daughter this year, I’ve decided to explain Haman as someone who behaved selfishly, as we all do, but whose behavior can be corrected and forgiven.

And I will continue to wonder about the actual Bad Man tale. When this is among the first narratives a child is introduced to, what does that do her psyche, let alone that of a whole people?