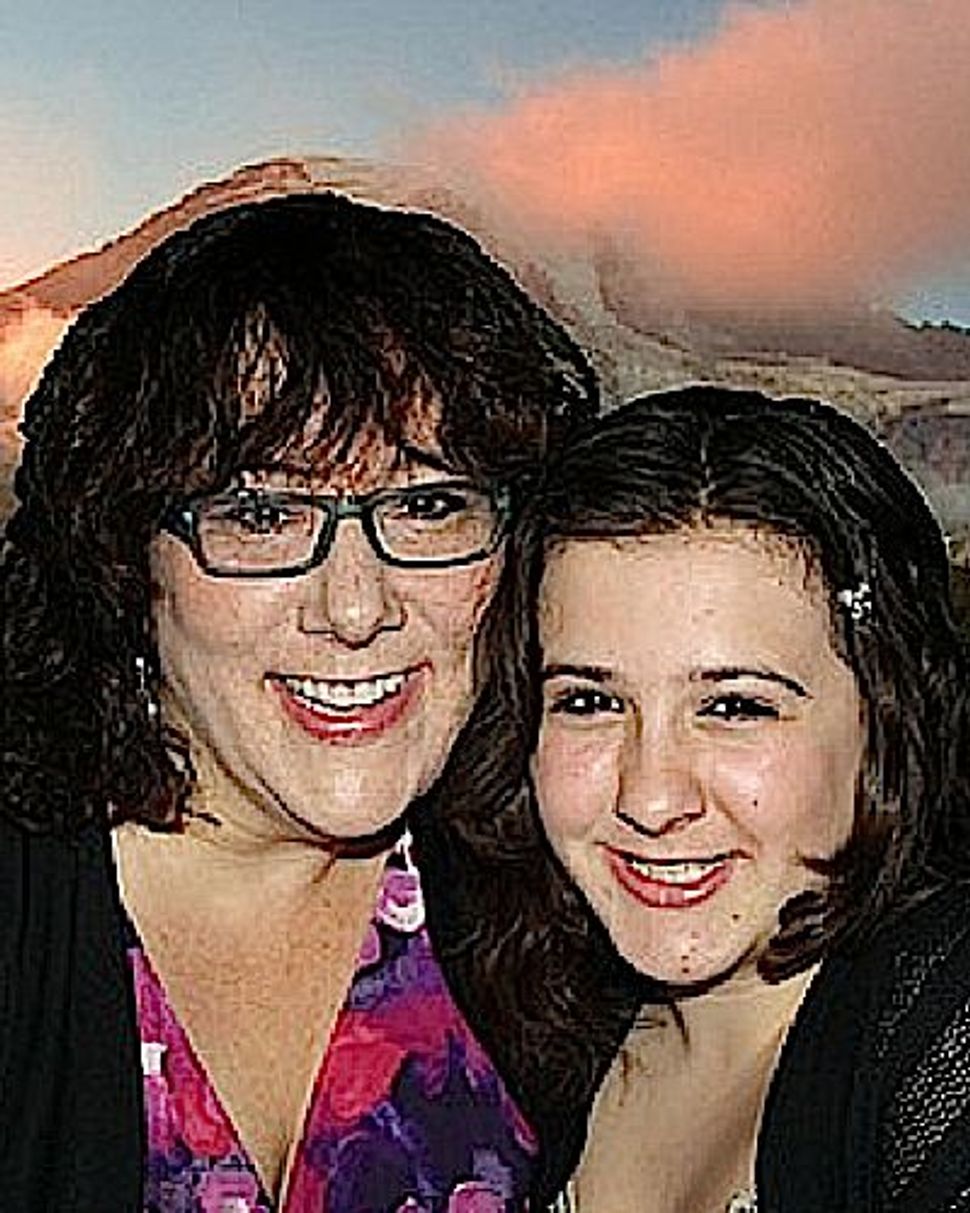 The author and her older daughter. Image by Debra Nussbaum Cohen

Days before Pesach we celebrated Girlchik’s bat mitzvah. Becoming bar or bat mitzvah is always cause for celebration, but hers was particularly sweet, since she had suffered a brain bleed around the time of her birth and her prognosis then was uncertain. Moments after telling me that my week-old daughter had suffered a major stroke, the hospital’s neurologist said: “It’s in God’s hands now.”

Today, thanks to hard work on Girlchik’s part, some great physical, cognitive and speech therapists, as well as God’s bountiful blessings, we were able to celebrate the bat mitzvah of our wonderfully healthy 13-year-old.

And thanks to a fascinating exhibit on the history of bat mitzvah put together by Moving Traditions, and The National Museum of American Jewish History, the topic of the bat mitzvah has been in the news lately. A recent piece on Tablet notes that “bat mitzvahs aren’t what they used to be.” To which I say: Thank God (and Jewish women) for that.

We can preoccupy ourselves with the ridiculously high hemlines and heels worn by some bat mitzvah girls. We can look to the Fort Knox-equivalent amounts of money spent by some families on over-the-top parties. Or we can concentrate on the things that have changed for the better.

Like the focus on the mitzvah part of bat mitzvah. The accomplishment in Torah learning and liturgical skill.

I have been to a wide range of bat mitzvahs. Some were inspiring for the ways the girls demonstrated their mastery of the relevant skills. Others were sadly superficial and followed by parties parody-ready for their lavishness.

At her bat mitzvah, Girlchik made me so proud of what she has accomplished, and grateful that she has been able to. Her bat mitzvah could not have been more different from my own, which I have described as “an unmitigated disaster.”

I was so liturgically illiterate that despite tortuous preparation I could not even read the relevant blessings in Hebrew. I needed it all transliterated. It was a sham, a show, and not a good one at that. And I have spent all of my adulthood, thus far, trying to make up for it.

I wanted to participate in Girlchik’s bat mitzvah service, so I signed on to chant one aliyah of the Torah portion. It was stunningly difficult. Hours of practice, listening to the tutor’s recording. Reciting it with her voice, then alone. The first time I stood in front of the actual sefer Torah, the letters swam. More hours spent practicing before the sefer Torah. Unlike all of my children, I utterly lack musical memory. And so it was really challenging.

My daughters were my cheerleaders, telling me I could do it, that “it’s not hard!” After several years of Jewish day school they are so conversant in text that for them it’s not hard at all.

And this, this is my greatest achievement as a Jewish mother. Beyond their good health and general well-being, beyond being good people in general, my deepest desire has been for my children to be literate Jews, conversant in our central texts, able to access any aspect of Jewish life that they choose. This is the essence and foundation of Jewish leadership.

In the end I made it through my brief turn at leyning, however imperfectly.

But Girlchik, my beautiful, confident daughter, she did it all. She leyned most of her Torah portion. She chanted the Haftorah and shared with the congregation an insightful Dvar Torah. She led the Torah service and Musaf. All with her characteristic sweetness and aplomb.

And so I am grateful many times over today. Grateful to have a healthy daughter whose healing was complete and so different than it might have been. Grateful to have a daughter who is at home in the synagogue, comfortable leading the congregation, and already prepared for a life of Jewish leadership. And grateful that her bat mitzvah, unlike mine, was an awesome experience for all of us — most of all, for her.