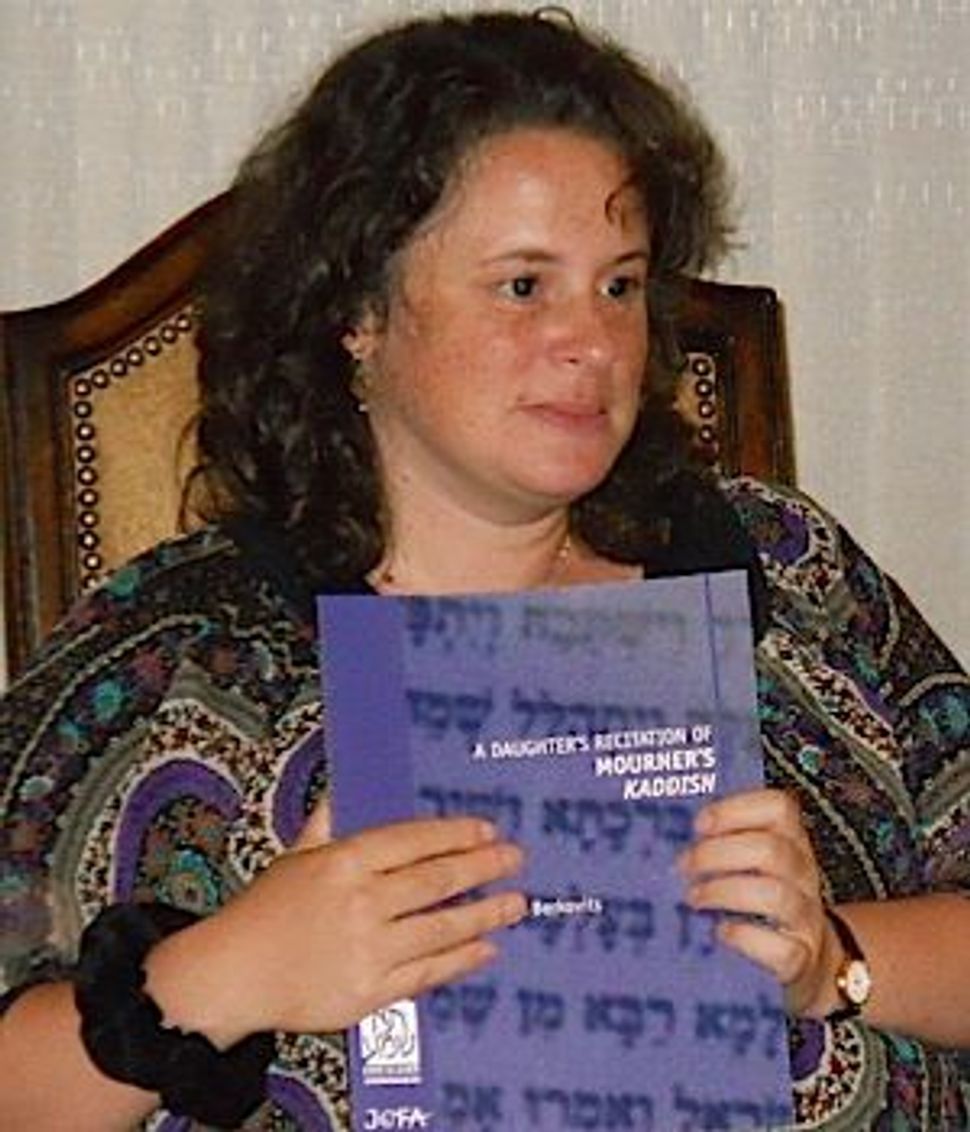 Rahel Berkovits is an Israeli feminist, a teacher of Jewish texts, and a founder of Shira Hadasha, which bills itself as an “Orthodox Feminist Congregation in Jerusalem.” Her recent book, “A Daughter’s Recitation of Mourner’s Kaddish,” delves into classical sources, and argues that under Jewish law women are permitted to recite Mourner’s Kaddish. She spoke recently with The Sisterhood about women’s issues in the Modern Orthodox and the Haredi communities, and giving women agency when it comes to saying kaddish.

Raphael Magarik: Coming from an Orthodox background, when did you start to write on halacha and gender?

Rahel Berkovits: I’ve been researching these ideas for a long time. I used to believe that to make changes [on women’s issues], you needed a big-name rabbi. The breaking point was the issue of women saying the sheva brachot [marriage blessings]. I did halachic research, I felt it was possible, and I thought, “I can’t do it unless I get the rabbinic stamp of approval.”

I spoke to some of my teachers, and they said, “What you say makes sense, but I won’t say it’s okay, because people will say I’m feminist or Conservative.”

I had this really ridiculous idea: Sometimes in halacha it’s the people with very big shoulders who make major radical decisions, because they’re not worried about what people will think. So I made this appointment to meet a prominent Haredi rabbi. He treated me so poorly. All he wanted to know was, “Did I have a TV in my house? What type of music was I having at my wedding?” I just remember walking home crying. At that point, I decided I was going to make most of my halachic decisions for myself.

How do you make sense of the simultaneous emergence of the progressive, feminist Orthodoxy of this book, on the one hand, and the struggles over women in Haredi communities, such as Beit Shemesh?

When I first moved to Israel [from America], I thought, “I’m coming from a society that embraces feminism” and “I’m coming to this Middle Eastern culture which is behind the times.”

But as someone who lives a life committed to halacha, I find the Israeli community much more liberal. There is this rabbinate that deals with marriage and divorce, and yes, that’s difficult. [Here] everything is not linked to a synagogue. In America, if you live in a town where there’s one Orthodox synagogue, to do anything different you’re really breaking away, you’re causing a rift in the community. Here you can start [a feminist congregation like] Shira Hadasha, and no-one cares; there isn’t an uproar.

Maybe ritual change is easier in Israel because the synagogue is only one part of Jewish identity — and the harder feminist fights are elsewhere.

Yes – though in Israel, I see changes in how many women have a lulav and etrog on Sukkot, even in more traditional communities. When Israeli girls learn for a year before their army service, and they’re in this religious atmosphere, it makes sense that you go to the shuk and buy a lulav and etrog. There isn’t a feminist statement there; it’s seen as an outgrowth of women learning.

How should Israeli society handle Haredim who reject modernity, and whose numbers are growing?

Haredim just want to live their lives, in their communities; they just happen to be getting bigger and bigger, so they want to remove from their midst anything that doesn’t agree with them. I don’t think it’s so terrible that in their own street — and yes, it’s a public street — in Mea Sharim, they had a separation in the street [during a public celebration]. Is that totally un-feminist of me? I wasn’t so up in arms about it.

There’s a whole feminist question: If those women are happy with that, and they choose to live in that society, do I still fight for their rights because they don’t know what’s good for them or do I accept their statement that they’re happy with how they live? … [P]eople have the freedom to live how they want.

It seems like you very strongly value people making their own choices.

That’s a big issue with women and kaddish. It’s one thing to do my own wedding — that’s under my control. With kaddish, it’s this point where women are so vulnerable, so emotionally raw. And they need a minyan or the synagogue; they’re so dependent on the traditional male community – for those women who live in the Orthodox world. I hope the book will allow those women to have conversations with men in positions of authority because they need those people. Most [Orthodox] women, particularly in America, go to traditionally Orthodox shuls. They don’t have choice, unless they are part of an alternative minyan.

These independent minyanim are groups of people who aren’t waiting for rabbinic authority; they’re getting together with like-minded people to take action. The question will be: What will history say about us? Only time will tell.