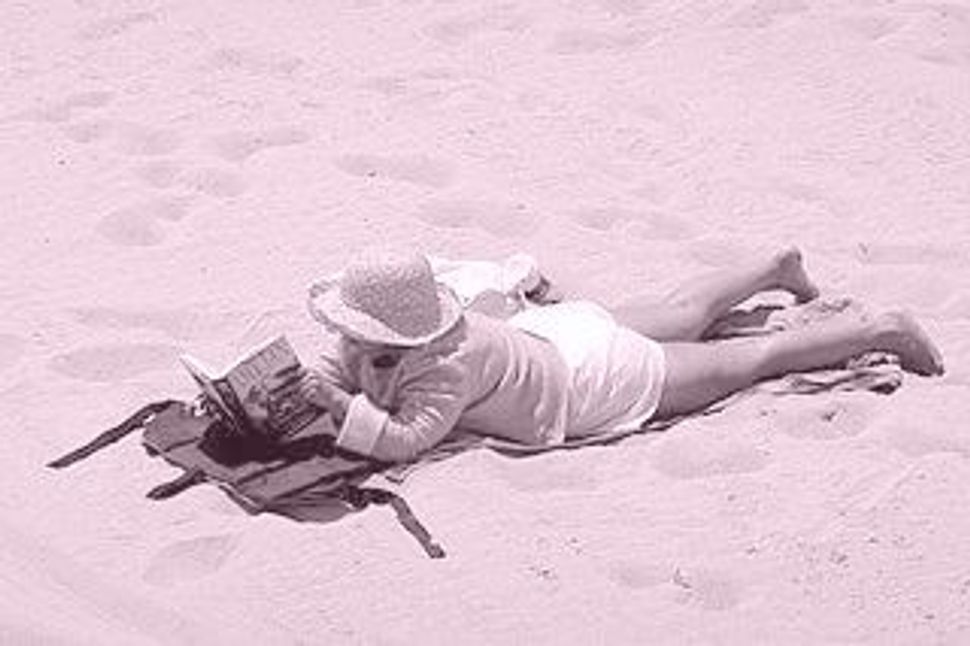 Come summer, newspapers and blogs are populated with book suggestions for reading under the sun. Unfortunately, though, the recommendations tend to skew a little light, and have little to offer the thinking gal. So we at The Sisterhood put together our own list of beach reads — a selection of titillating summer reads, new and old, that fall somewhere between “War and Peace” and “Bridget Jones’s Diary” and won’t have you reaching for your friend’s copy of Vogue ten minutes in.

You won’t find much of the way in of disappointed daters or caustic mother-daughter relationships. And you certainly won’t find any thematically retro BDSM-inspired best-selling novels. Instead, we have scrappy chefs, a German war games champion, medieval Talmudic scholars, and, naturally, Diane Keaton, a woman who is so much more than Woody’s original muse.

Feel free to add your recommendations in the comments section below.

The fact that it is set on a beach makes Roberto Bolaño’s most recent book, “The Third Reich” a great, albeit slightly unusual, candidate for a well-rounded summer reading list. With its trouble-in-paradise vibe — like the sour undertones of the Beach Boys’ music — the book compels the reader to speed-read all the way to its murky conclusion.

In the novel, which was written in 1989, but published in 2011 well after Bolaño’s death, a young German war games aficionado named Udo Berger vacations in a Spanish seaside town with his girlfriend Ingeborg. The couple stays at the same hotel that Berger visited with his family as a youth, owned by a captivating German hotelier, the mysterious Frau Else.

Moody and anxious, Berger never quite takes to the party scene at the beach. Instead, he retreats to his hotel room, where he plays Third Reich, an elaborate board game. As his relationship disintegrates, Berger invites a scarred drifter named El Quemado (the burned one) to participate in the game. But as El Quemado starts to best him, the stakes become higher and higher, until Berger fears he is playing for his life.

Annie Hall, with her gender-bending garb and willingness to share her every thought and insecurity, created a new female archetype. Demure and mysterious were out, candid, vulnerable and a little restless, in. Indeed, many of us in the lady blogosphere have a very Hallesque instinct for self-expression through openness and deliberation.

In her new memoir, we see how much Hall was based on Keaton herself, and how she has not lost that ability to contemplate, then question, then laugh, that made Hall such an iconic character. The book, co-written with another lady blogger forbearer, Anna Quindlin, takes us through her rise as an actress, her relationship with Woody Allen, her experience with bulimia, and, in her 50’s, motherhood. She also weaves in stories about her mother, including passages from her mother’s diaries, who battled an ongoing depression exacerbated by the limitations placed on women during the 20th century.

“Blood, Bones and Butter: The Inadvertent Education of a Reluctant Chef,” Gabrielle Hamilton

Good food writing makes you hungry. Excellent food writing satisfies the cravings it provokes. Hamilton’s book does this with grace. The memoir follows the author and her meals (those she was served and more often those she cooked) from a latchkey childhood through her gritty young adult life in New York, her backpacking trip through Europe and ultimately to the opening of her well-regarded restaurant Prune.

The charm of Hamilton’s book is not in the experiences — though, at times, they are highly entertaining — but in her ability to bring the reader with her into each and every kitchen she enters.

“Rashi’s Daughters, a trilogy of historical fiction by Maggie Anton, tell the intertwined stories of the three daughters of Judaism’s most influential sage, Rabbi Saloman ben Isaac, in 11th century France: Joheved, who loves to study Talmud, her sister Miriam, a midwife and ritual circumciser, and Rachel, who faces upheaval with the arrival of the First Crusaders.

The books are perfect summer reading for those who want something with a bit of substance without heavy intellectual lifting. “Book 1: Joheved” is the strongest, in my view, but each of the volumes draws vivid images of what daily life may have been like for these real Jewish women, who lived nearly a millennium ago and about whom little historical evidence remains.

One of the things I love most about Anton’s story is that the author herself only began studying Talmud in the early 1990s when she was 42 and took a class with Rabbi Rachel Adler. It was the questions that arose for her through her study which lead to her writing “Rashi’s Daughters.”

For those of us who are already fans, there is more good news. Anton’s latest, “Rav Hisda’s Daughter,” is out this month. It tells the story of the heretofore-unnamed daughter of one of the most prominent sages in the Babylonian Talmud. Thanks to Anton’s interpolation back into time of the details of this sage’s daughter, we can learn a bit about what life was probably like for Jewish women in 3rd century Persia, a time of tremendous religious and cultural ferment.

If you’ve ever seen the movie or read the book “The Men Who Stare at Goats”, you won’t be surprised at the kookiness of Jon Ronson’s latest book, “The Psychopath Test.” (If you have yet to experience “The Men Who Stare at Goats” it, do so before continuing reading this, or doing anything else.) In his new book, Ronson crisscrosses the globe, exploring the concept of pyschopathy. This is definitely a book to read on the beach, surrounded by perfect strangers.

If you’re looking for a light-hearted pick-me-up, this is not it. Like the original fairy tales that this book depends so much on, “The Book of Lost Things” is dark and grim. The story is about the journey of a British boy in search of his dead mother’s voice. There is a lot of bitter in the tale, but there is a lot of sweet too. The boy eventually becomes an adult and a hero, battling monsters and evil men to get back to a home he has learned to love.

“I Was Told There’d Be Cake,” Sloane Crosley

When a title is as crisp, intelligent, and funny as “I Was Told There’d Be Cake,” you know you’re in store for a great read-and Sloane Crosley does not disappoint. From being roped into a forgotten childhood friend’s wedding to never fulfilling her dream of a true one-night stand, Crosley’s essays are not only full of humor, but insight too. A collection of toy ponies from past boyfriends is described with self-effacing humor, but also poignantly as “proof that I have tried to love and that people have tried to love me back.”

Crosley is both concise and swift; in a single essay, she adroitly glides from her family’s almost-move to Australia to the perils and pleasures of being named “Sloane.” Published in 2008, this New York Times bestseller is a perfect summer read with each essay sure to keep you engaged and laughing as you lie on the beach or suffer through another sweltering commute.