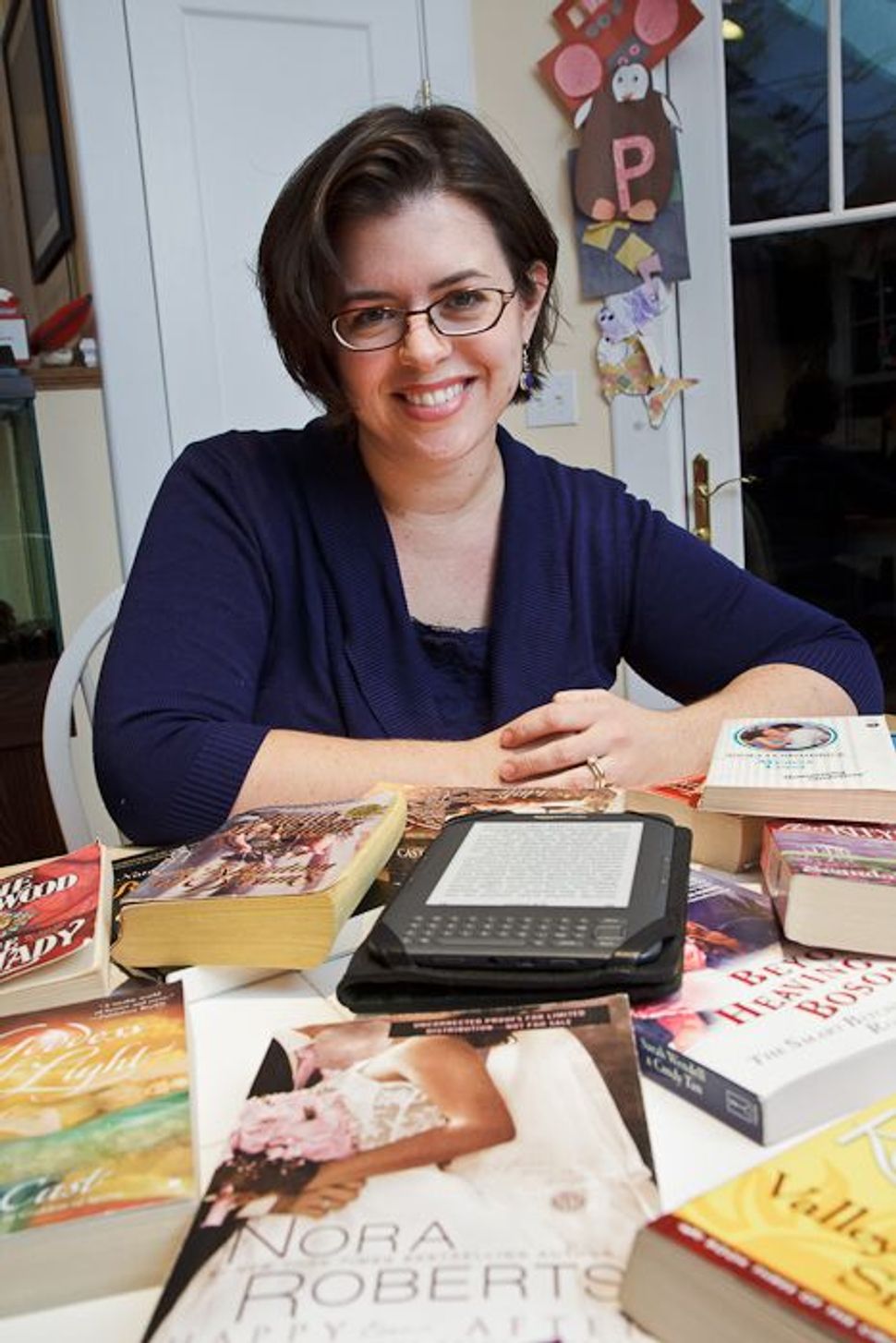 Blogger and self-proclaimed “man-titty media pundit” Sarah Wendell posts witty and wicked reviews of romance novels at Smart Bitches, Trashy Books, and has also written two books about the genre. The Sisterhood caught up with her to talk “trash,” sex and David Beckham in his underwear, plus what she really wants to know about “50 Shades of Grey.”

THORNBURGH: Your website is called Smart Bitches, Trashy Books. Are the romances really trashy? And are the women who read them actually smart?

WENDELL: No, and yes! Smart women read and write romance, and that has been true for a really long time. They’ve taught me amazing things about women, about history, about feminism, and about language.

There are a lot of reasons why romance as a genre is dismissed. Plain old, everyday, garden-variety sexism. This is a genre that’s written by and actually read by women, and most of the editors and industry professionals are also women. It’s a women-dominated genre and a women-dominated profession and for that reason alone it becomes an object of ridicule.

But on top of that, to quote Nora Roberts, romances contain what she calls “the hat trick of easy targets: emotions, relationships and sex.” Any combination of those three is a ripe target for ridicule as well. We don’t value emotions and we don’t value outward displays of them. And that’s what romance deals in. It doesn’t hide what it is. If you look at a romance novel, you know that’s a romance novel.

What do you tell people who are curious — but skeptical — about reading romance?

The first thing people picture [are] the books from the ‘70s, ‘80s, and early ‘90s where the woman’s falling out of her dress and her hair is blowing in the wind and there’s some farm animal freaking out in the background with copious amounts of fuchsia and turquoise. Romance is actually a very diverse genre… There’s science fiction, romantic suspense, contemporary, historical. There’s angsty romance with sad and difficult topics and there’s romance that’s almost slapstick with its level of comedy.

Your blog does a lot of advocacy against this anti-romance prejudice. Is that what you set out to do?

We (site cofounder Candy Tan and Wendell) had both been told that [romance] wasn’t “acceptable reading material,” and we disagreed. We saw that there [were] so many things in romance that were so good if only people would just listen to us… And then there were parts that were absolutely friggin’ hysterical, and we wanted to talk about that, too. Our audience began to grow, and when I started writing more broadly about sexuality, and the position of women in different countries, and the way women read and access books in other cultures … the more I learned, the more I wanted to share.

It seems like there’s an incredible network of romance readers and writers.

I have readers in over 150 countries. I have readers in just about every time zone. When something happens internationally, I have someone there. The world for me has become very small. I like to think that if I could go to another country and find where they sell romance, I could find potential friends.

You just came back from the Romance Writers of America National Conference in Anaheim. What’s the atmosphere like?

Most of the editors, publicists, marketing professionals, and publishers involved are women… And everyone who goes to RWA is in pursuit of a good book. They either want to write it, read it, edit it, publish it, or review it, in my case. But in addition, because we are so used to the negative stigma of being a romance reader or author — “oh, you write those books, the smut books” — when you’re among your own people, there’s a kind of instant camaraderie.

Do you think that e-books are attracting new readers to romance because of the anonymous quality of reading on a Kindle?

I do not believe that women are unilaterally ashamed of the fact that we read romance. I believe that we are told so much to be ashamed, but we’d actually prefer to read in peace. With e-books, you are excused from the condescending bookstore clerk, but more importantly, think about the culture of the media right now around anything to do with sex. Imagine if Rush Limbaugh sees you buying erotic romance! So if you can avoid all that, plus you can have 400 books in your purse — this is all a win-win for romance readers because we’re very avid readers.

And if you are a voracious reader, reading digitally makes buying an incredibly instant experience. Because when do we women read? We read most often when we’re doing something else and we’re waiting. We’re waiting in line at the grocery store, we’re waiting in line at the bank, it’s the middle of the night and our child is up and we’re waiting to get them to sleep. If you can get a book to someone who wants to read at three in the morning with a couple swipes of a finger, you’re creating a very happy and loyal customer.

So there really is more to it than the “shame factor.”

The material of romance novels is very, very sex-positive for women. If you think about how women are portrayed in other venues, we’re airbrushed and we’re spray-tanned for these unrealistic sexual experiences. Think about how many women in bikinis are in the commercials for the Super Bowl! We had one: David Beckham in his underwear for 20 seconds. That was for the ladies, that was all we got, and that imbalance is everywhere. Women as the objects of sexual gaze for men is standard. Women as the centerpiece of sexual experience, where it’s about her satisfaction, is much more difficult to come by, and that’s part of what explicit romance is all about.

And that’s not to say it gets it right all the time, either. If I see one more simultaneous orgasm, I’m gonna call Dr. Ruth! But there’s still a wealth of powerful influence when you portray sexuality as a positive thing.

You wrote a great post last December about Hanukkah-themed romances. Are there romance novels with Jewish characters?

There’s more and more every year. I actually converted [to Judaism] 13 years ago, so I like to tell people I’m fluent in goyim, and I see the dominance of Christmas in romance and I’m thinking, “I know there are more readers and writers that are Jewish!”

So there’s a lot of Jewish women who write romance, but I would love to see more Jewish characters and just more different cultures represented. I love learning about how people’s family dinners and cultural interactions are different from mine, especially because I’ve so closely experienced two very different ones.

We can’t have a romance novel expert here without asking you about “50 Shades of Grey.”

The questions I get most often is “Why is it so popular? Isn’t this just like all those other romance novels?” The thing I wish people would ask is: “What happens after ‘50 Shades?’” My theory is that 50 Shades has become the book that people who don’t often read are reading. “The Hunger Games” was like that, “Twilight” was like that, “Harry Potter” was like that, “The Kite Runner”… Books where people who don’t usually read as their first form of leisure will read it. Once everyone who’s curious about it has read it, I’d love to see how many of those readers are curious about other books like that, books about courtship with really intense emotional scenes — we have a lot of those that are really good! I’ve got a whole recommendation list ready to go.