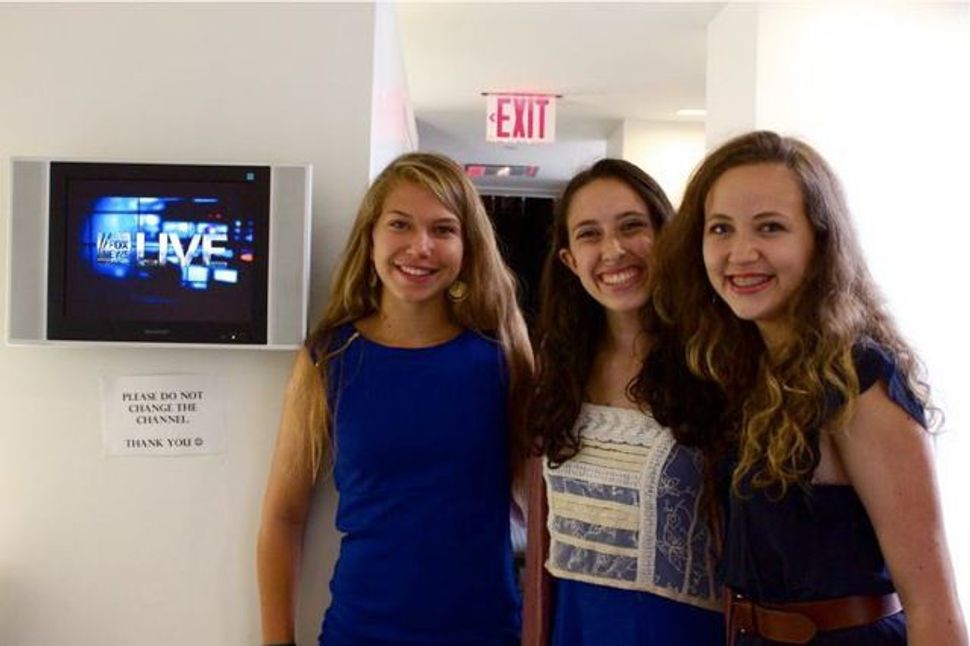 Never before have three 16-year-old Jewish girls had so much impact on national American politics. With the announcement that the Presidential Debates Commission has named two men and, notably, two women to moderate the upcoming nationally-televised debates between the presidential and vice presidential candidates, three friends from Montclair, N.J. — who galvanized tens of thousands of people to sign petitions urging the commission to name a woman as moderator for the first time in 20 years — can claim victory.

“We’re all absolutely ecstatic!” wrote Emma Axelrod, one of the three girls, in an interview with The Sisterhood conducted via Facebook. “It’s the first time in American history that (counting the vice presidential debates) women have made up 50% of the debate moderators. We weren’t even expecting that!”

“It’s absolutely amazing that the Presidential Debate Commission finally listened to the three of us, including the 180,000 people that agreed with our campaign,” her friend Sammi Siegel wrote in an email. “Now, with a woman moderating the presidential and vice presidential debates, little girls will be able to see positive role models on the political stage.”

Axelrod, Siegel and Elena Tsemberis, all of whom are Jewish and incoming high school juniors, created two petitions calling on the commission to select a woman as moderator for one of the upcoming face-offs between the candidates. The last time a female journalist held this role was in 1992 — several years before Axelrod, Siegel and Tsemberis were even born — when ABC News’ Carole Simpson led the debate between Bill Clinton, George H.W. Bush and Ross Perot.

But the girls remember watching the Obama-McCain debates four years ago, when they were just 12 years old. Axelrod told The New York Times’ Jodi Kantor what an impact this debate made even before she was politically aware:

Some 180,000 people signed their petitions, calling on the commission and the Obama and Romney campaigns to support the idea that a woman moderate at least one of the three debates slated to take place in October.

The first petition outlined this point clearly: “Women and men will never be truly equal in our country until they’re one and the same in positions of power and both visible in politics. We need to take immediate action in order to move towards this change. There is no reason why a woman shouldn’t have a chance to show what she’s capable of by moderating debates in the upcoming election.”

When asked about public’s response, Siegel explained via Facebook:

We’ve gotten, for the most part, outstanding feedback about the petition. Especially in our school, our peers really supported our cause and wanted to share it with their friends and families. So many of them would post the link on Facebook, and many were posting about how many signatures we were getting each day. We’ve received so much support, and it has been truly amazing. There were some negative comments on various articles or video clips of us talking about the petition, but we like to focus on the positive and know that we are fighting for something that 180,000 people want in the upcoming election.

The commission did not respond directly to the girls’ effort, and did not allow them in the building when they went to Washington with boxes of signatures. But in the end, the commission revealed just how much of an impact the girls had on American politics.

“We encourage people to continue fighting for political equality, and we don’t want this to happen again,” wrote Siegel by email. “We’ve brought this issue to the attention of the public, and we can’t have another 20 year gap. I’m so amazed that we have made such an impact even as teenagers.”