Who Cares What Hillary Clinton Wears? 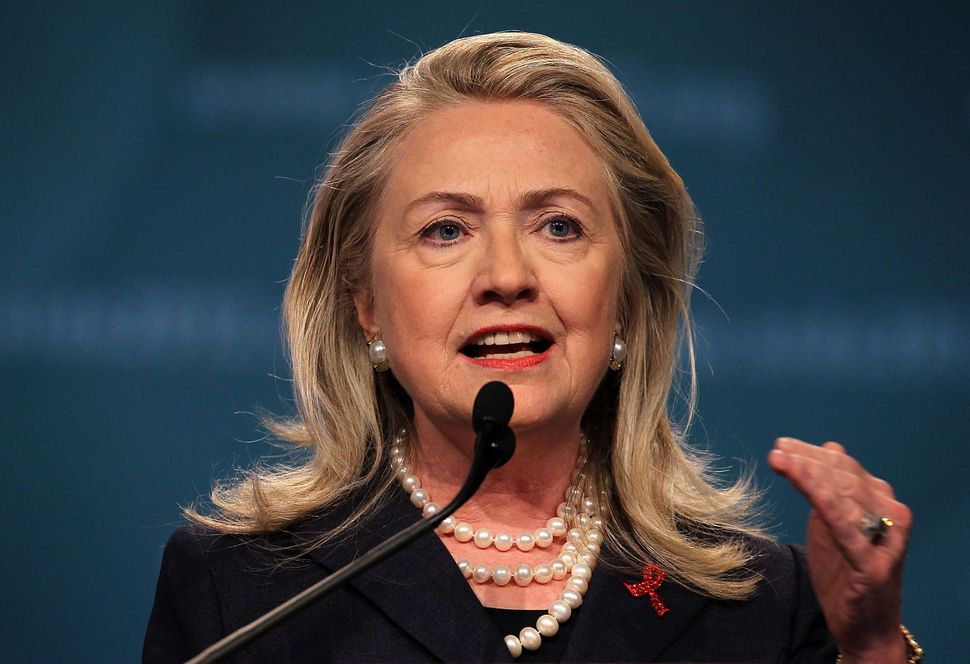 Clothes may not make the man, but apparently they do make the woman. In America, it seems that no matter how successful, intelligent or high-ranking a woman is, she will ultimately be measured by her looks. At least that’s the message gleaned from a recent interview Secretary of State Hillary Clinton gave in Bishkek, Kyrgyzstan:

Depressingly, this is not the first time that Clinton — whose resume boasts titles such as Secretary of State, former New York Senator and former 2008 Democratic presidential candidate — has faced sexist commentary objectifying her body rather than respecting her work. As the Guardian asked, “She’s hoping to become the most powerful woman in the world — so why does Hillary Clinton wear such uninspiring clothes?” Fox News talked about her “nagging voice,” and when the Huffington Post ran a caption competition for a photo of Clinton with her mouth open, the obnoxious entries started rolling in. News cycles have devoted extensive coverage to her pants, her ankles, her skin and, perhaps most notoriously, her cleavage. During the 2008 elections, the Women’s Media Center compiled a compelling video montage of the pervasive sexism that women like Clinton have had to endure.

Of course, Clinton is not the only woman facing this overbearing obsession with her appearance. Recent examples of this kind of sexism have included media commentary on Connecticut Rep. Rosa DeLauro’s “fashion sense”, Democratic Party chairwoman Debbie Wasserman Schultz’s hair, and New York State Senator Kirsten Gillibrand’s make-up. I submit that professional women in a variety of fields deal with opinions of their work based on unspoken judgments about their appearance all the time.

Society’s obsession with women’s appearance causes definite damage to women in many aspects of our lives. A research report by the Name it. Change it. campaign of the Women’s Media Center shows that sexism in any form hurts female candidates, and makes nearly every potential voter, from the undecided to initial supporters, less likely to cast a ballot for them. “Nearly seven in ten voters report being less likely to vote for Jane Smith after they hear her being called an ice queen and a mean girl; as well as more strongly sexist language,” the report concluded. “Sexism costs a woman an average of 10 points in favorability.” In the sports arena, female athletes, even those with gold medals, are also judged on their looks. Gabby Douglas’ hair to wit.

Economically, women spend huge sums of money perfecting their look. “If you took that $100 a month you are spending on manicures and pedicures and invested it starting at age 25 in stocks that went up 10 percent a year, you would have over $500,000 by the time you were 65,” Manisha Thakor, a financial analyst and co-author of “On My Own Two Feet: A Modern Girl’s Guide to Personal Finance,” told The New York Times a few years ago. Indeed, a recent Newsweek study revealed that women will spend over $200,000 on hair alone over their lifetimes. Add in the expenses for maintaining a socially acceptable face, body, hands and feet, and the average lifetime expense climbs to almost $450,000.

And let’s not forget the cost to women who choose not to adhere to those expectations — like the woman who was fired for not wearing make-up to work. We haven’t even mentioned the research showing women who are refused jobs or raises or promotions because they are not beautiful or thin enough. Or the staggering growth in eating disorders and cosmetic surgery, even among young girls. The detrimental effects of our sexist culture on girls and women are too vast to fully recount here.

Kudos to Hillary Clinton for calling out her interviewer. I love that she is strong, smart and confident enough to take a powerful stand against sexism in our culture. We must learn from her example. The more women speak up, the more chance we have of actually changing our surrounding culture.

Who Cares What Hillary Clinton Wears?