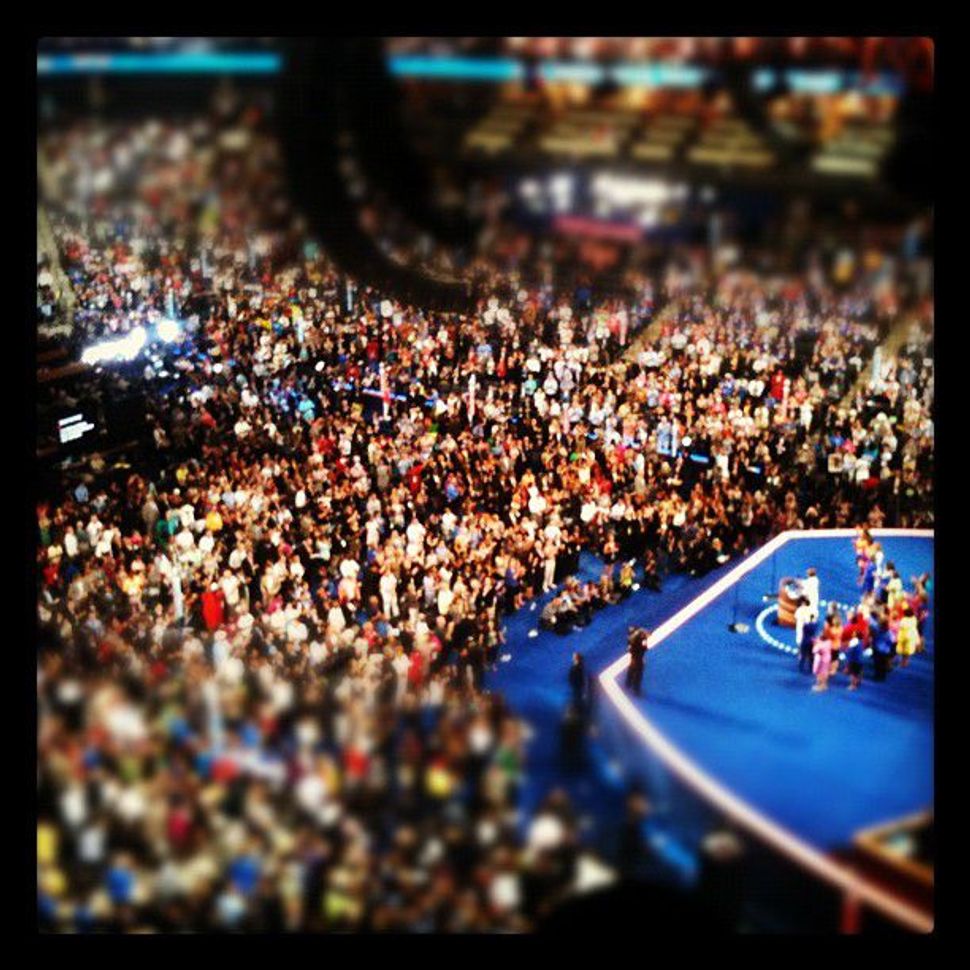 I’m a sucker for a good montage. I’ve been known to reach for the tissues before the Academy Awards even starts pulling out all of the schmaltzy stops. (I’m not even talking about the montage of people who died; I tear up during the “magic of the movies” opener.) But pageantry? Please. Watching on TV, I never fall for people who look emotional and choked-up behind the podium.

This week, I headed to the Democratic National Convention with a hardened gaze, endeavoring to take an even-handed look at all the pageantry and politicking, and to exercise some shrewd insight over the hullaballoo. Because what are the speeches and presentations of the evening if not the world’s largest infomercial, the commercial cousin to the montage? And isn’t politics just Hollywood for ugly people, anyway?

As I took my seat, journalistic objectivity and heartstrings of steel were my watchwords, and at first, it was easy. I watched. I took noted. I occasionally scoffed. But when the Democratic women of the U.S. House of Representatives took the stage, I started listening harder. These women, in a rainbow of backgrounds, constituencies, and pantsuits, were talking about issues, but not in some abstract, fade-to-music way. They were telling their stories and fights with rhetorical flair, and I found myself genuinely thrilled to hear about the legislation they passed for military families, victims of domestic violence, and fair pay for women. I watched presentations onscreen about families who could finally afford to take care of a sick little girl under the Affordable Care Act. I watched Tammy Duckworth and Nancy Keenan and Lilly Ledbetter and I felt something kick to life in me, an unbidden inspiration.

It’s easy to chalk it up to the excitement of the moment. Being in a crowd filled with people who are yelling and clapping every other sentence gives you a rush, and the acoustic music and intimate shots of children playing in backyards lend the montages a particular manipulative power.

And yet, despite all my cynicism, I was there, literally and figuratively. I felt a kinship to these powerful, intelligent, determined women, and at that moment I wanted more than anything for them to keep going. Keep progressing. Keep fighting for the equal rights I didn’t realize I didn’t have as a woman until they shone a spotlight on them for me.

It’s taken me a long time to come around to calling myself a feminist. But after last night, I’m even prouder to say it, to give me something in common with the women of the Democratic party. They made me feel close, even though I was in the nosebleeds and they were on the Jumbotron.