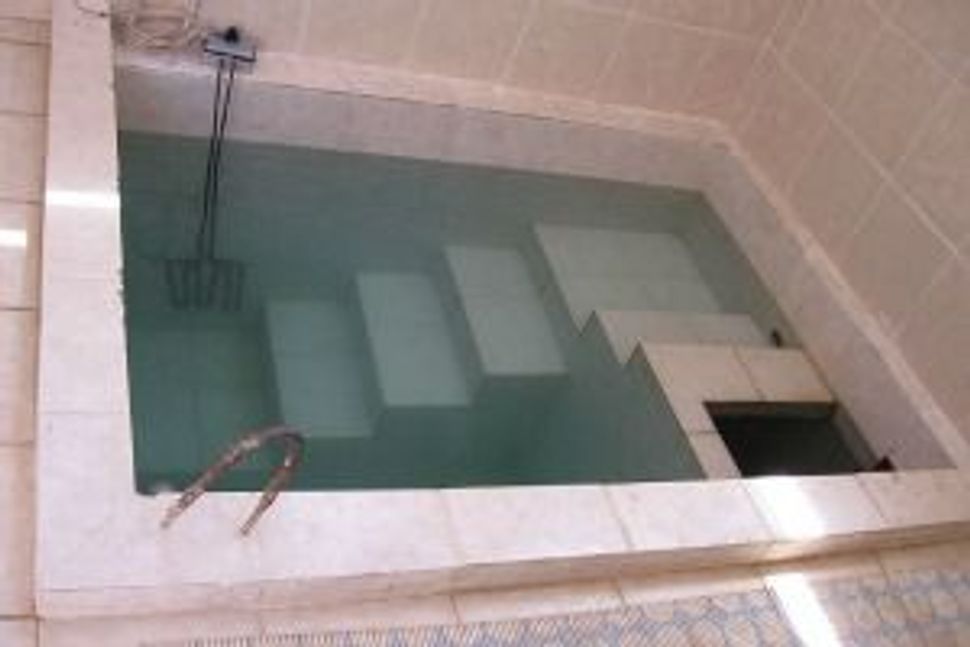 Going to mikvah, particularly if you’re not Orthodox, can be complicated. But nowhere is it more complicated than in Israel, where women are required to establish that they are married or will soon be, and have taken a rabbinically-sanctioned pre-marital education course. If you want to immerse in a mikvah for any reason other than in observance of “the laws of family purity” as a married woman? Forget about it.

Those who believe that women should have access to the private ritual of mikvah for any reason may be able to discern a glimmer of hope on the horizon. Israel’s Supreme Court has ordered the minister of religious services, Yakov Margi, and Chief Rabbi Yona Metzger to explain why women are questioned about their marital status when they go to one of the taxpayer-funded ritual baths.

The court’s order is in response to a petition filed last December by the Center for Women’s Justice and Kolech: Religious Women’s Forum, on behalf of two single women who were turned away from using a mikvah.

Single women are permitted to immerse for a host of reasons, according to the petition, and should be under no obligation to delineate or justify their beliefs to religious authorities.

According to the YNet News article, the petition:

was filed after a female soldier approached the Center for Women’s Justice in April 2010, following several failed attempts to immerse in her local mikveh because she was not married.

The petition noted that the soldier viewed the act of immersion as part of her religious faith and spiritual work, and that the bath attendants explained that they could not let her immerse due to orders issued by the religious council.

Due to the refusal, the petition stated, the soldier was forced to lie about her marital status or travel to the sea or springs in order to immerse.

Another case mentioned in the petition is of a new immigrant who approached the Center for Women’s Justice after seeking to escort her host to the mikveh on Yom Kippur Eve in September 2009.

Upon her arrival, the bath attendant refused to let her immerse in the ritual bath because she was single, describing such an act as blasphemy, heresy and hypocrisy.

Metzger wrote a letter, which was filed with the petition, in which he stresses that unmarried women — single, widowed or divorced — must not be allowed to immerse in the mikvah, lest they feel permitted to engage in a prohibited sexual relationship.

The problem, in this case as in so many others, is that the Orthodox rabbinate has the power to decree, even in publicly-funded spaces like mikvahs and at the kotel and on buses, that its standard alone has the rule of law.

That’s well and good for traditional Jewish women who want to observe mikvah immersion only when they are married and only to mark the conclusion of their menstrual cycle.

But it leaves a growing number of others barred from access to a ritual that has the power to mark important moments of transition, in personal relationships and in life, as at the conclusion of chemotherapy or at the end of a marriage or when an unmarried woman becomes a mother.

And it begs the question: Does the Jewish state see Judaism as belonging to all Jews? Or only to the traditionally Orthodox?