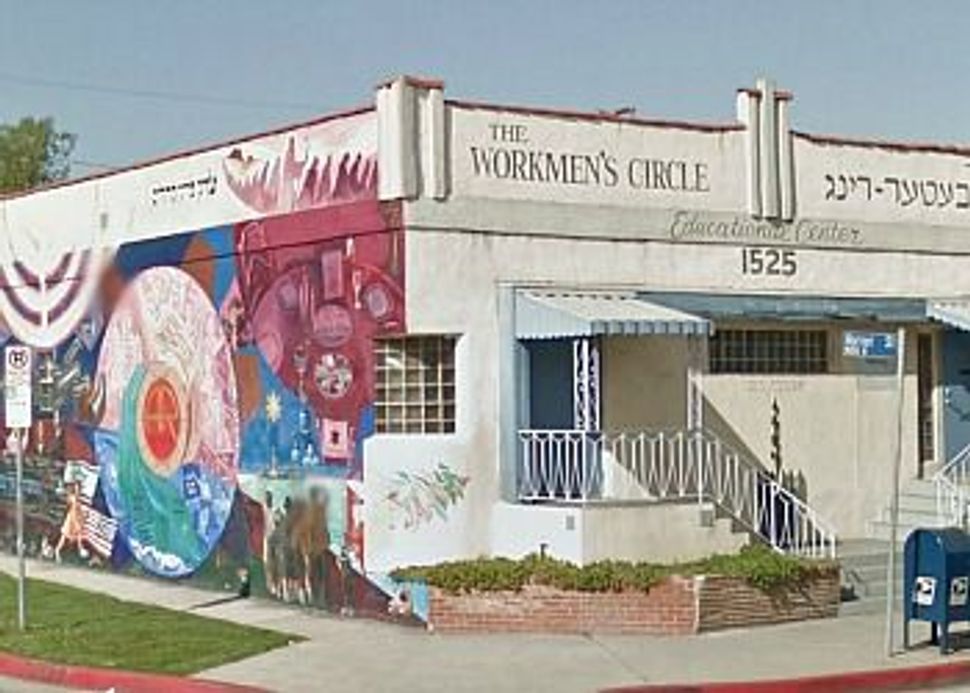 You know those heartwarming chick flicks where women with seemingly little in common are forced together by circumstance, bond over something like quilting, beekeeping, small-town politics or a Jane Austen novel, and end up teaching each other a thing or two about life?

That actually happened to me, but it didn’t take place in a goyishe beauty parlor or a nursing home. No, this group formed at the austere Yiddish class of my local Workmen’s Circle

One night after work, I decided to attend a class in the Pico-Robertson neighborhood of Los Angeles so that I could continue studies I had begun several years earlier in college. I was looking for a hobby while my husband worked long hours, and though I knew Yiddish was a quirky pastime for a 26-year old woman, spin class held no appeal. What I found inside the haimish, dilapidated building was nothing like the university class I’d taken years before. The teacher, an old-school, erudite litvak named Yakov Basner, got down to brass tacks with the alef-beys, avoided using a text book and gave lengthy dictations. I liked him immediately.

The beginner class was small, composed entirely of retired women of different ages (aside from me, of course). They were motivated, intelligent and quick to laugh, but none of us could keep up very well with Reb Basner’s homework assignments and grammar lessons on the dative case. Soon we were emailing each other to collaborate and check our work. Soon after that, I began receiving forwarded chain emails filled with Jewish jokes. I’d hit the jackpot — my own group of freelance intellectual Jewish grandmothers! (My bubbe had passed away the year before.) We went by our Yiddish names. I made friends with Toybe, a genteel former English professor and bibliophile; Binke, an avant garde fabric artist; Shaye, a hip vegetarian illustrator and Hane, a rather glamorous former French teacher. I was Rayzl, a restless editor moved by the idea of intergenerational female friends. I had never before been exposed to a group of such accomplished older Jewish women.

When the semester ended, we planned to meet once a week during the summer at each others’ homes to continue our lessons. But we hardly studied. We planned elaborate gourmet potluck meals, and I listened to them discuss their lives — careers, children, divorces, grandchildren, health problems, travel, coping strategies, Jewish-themed movies. They pressed books and cups of tea into my hands, asked about my job satisfaction and the health of my parents and grandfather. What could I offer but the occasional shtikl computer tech support?

We went back to class in the fall, but eventually I moved on to the intermediate level while my new friends opted to have another go at the beginner class. We would catch up in the hallway between our classes. They invited me to their housewarming and holiday parties, and Toybe often asked me to visit with her and share a pot of tea under the shady fruit trees in her backyard. And when summer came around, the potluck study sessions resumed.

But when class started again in the fall, my heart wasn’t in it. My marriage was falling apart and Yiddish class was suddenly low on my priority list. I became a Yiddish class dropout. My friends called and emailed with rachmones (a uniquely Yiddish form of empathy) and advice, but they also urged me to come back to class. I demurred, thinking that it was more important that I free up my Monday nights for something more age-appropriate.

That was nearly two years ago. I still get the occasional email from my Yiddish class friends, and I think of them often. I adore them, after all. Like true surrogate Jewish grandmothers, even their absence from my life exerts an unintentional pull, and I feel guilty for not making more of an effort to stay in touch and share news about my life. As the saying goes: I never call, I never write.

Yiddish classes started this week at my Workmen’s Circle, and likely at most branches around the country. I know I would be welcome.