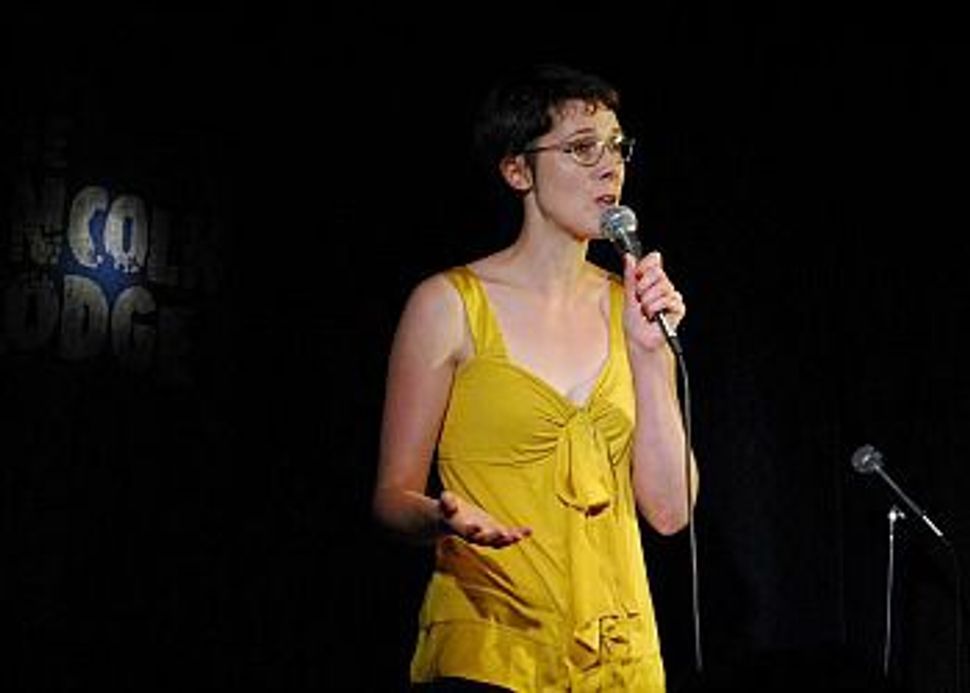 The best class I took in my last quarter of college didn’t have tests or quizzes. The teacher made us laugh. Our homework was (literally!) fun. And the final exam was an oral presentation… in the back of a bar. Bad grades? Not an issue. Bad jokes? Now that was something to stress over.

I was one of a handful of funny ladies enrolled in Level One of a new kind of comedy called The Feminine Comique. Founded by Chicago comedian Cameron Esposito, the classes are the nation’s only all-female workshop for stand-up comedy. I first heard about FemCom, as it’s known, at a storytelling event in Chicago, and even though I hadn’t been onstage since my eighth-grade production of “Joseph and the Amazing Technicolor Dreamcoat,” I could tell this class would be something worth wandering off campus for. It was senior year, after all, and what better way to prep for the slings and arrows of the so-called real world than by grabbing a mic and baring my soul for the amusement of others?

The classes met at night in a rec center so far north of the University of Chicago campus that it felt like a different country. For five weeks, our teacher Kelsie Huff — a comedian and storyteller who does improv and one-woman shows in Chicago, and even took the FemCom class herself before taking the reins from Esposito — asked us to write exercises, scribble jokes and, most importantly, practice talking to an audience. The one ironclad rule when you got up for your set? No apologizing.

“Traditionally, in comedy, women have been the butt of the jokes. If you feel safer and comfortable with all women, this class is a good fit for you,” Kelsie told me in an interview, and I completely agreed. Everyone there, from the retirees to the young professionals to the baby of the class (that’d be me) had a story — and a joke — to tell.

“Everyone wants you to succeed — even that first day,” Kelsie said. “And I think everyone is funny. Humor is a mechanism to survive, and all humans have it. In class, we are here to teach you how to tap into your truth, and it will be funny.”Comedy may be truth, but that doesn’t make it comfortable, especially (unfortunately) for women. But stop right there, Adam Carolla, we can still do it.

“Women of course are funny,” Kelsie told me. “Honestly, I think it sells newspapers to say those things. Doesn’t he have a book coming out?”

Still, she never sugar-coated it for us in class: Jerks and hecklers are part of the job.

“Comedy isn’t safe — that’s the good stuff, getting into that gross, uncomfortable space — so I do encourage people to go out to open mics and experience audiences in reality,” she said.

The important part is not to let them drag you down. “Do the work, be funny, show up, and no one can say those things any more.”

By the evening of our graduation show — five whole minutes each, alone, in the spotlight — I felt like being funny was easier said than done. But there was no going back. Besides, I’d already paid for two hours of parking.

So after weeks of preparation, I wrote a few notes on a post-it, climbed onstage, and told some jokes. I tapped into my truth: about being tall, about my terrible junior prom date, about how much I hated the Amish (okay, so mostly the truth. I’ve got nothing against the Pennsylvania Dutch). Incredibly, people laughed, and then it was over as quickly as it had begun.

Whether I continue in my career as a budding comedienne or not, I’ve at least got the tools: the beginnings of a five-minute set, and the amazing network of FemCom grads that’s blossoming on Facebook and beyond. But what I learned went beyond how to deliver a zinger or how to rant onstage with conviction and clarity.

“You can make change by being positive. Make change by doing good work. Make change by getting up there and proving how wrong everyone is. Make change by kicking ass,” Kelsie said. “You start in a comfortable place, find a network of like-minded people, get confident, and then take over the f—ing world.”

It’s a pretty awesome philosophy to believe in, but FemCom taught me that I can make it my reality.