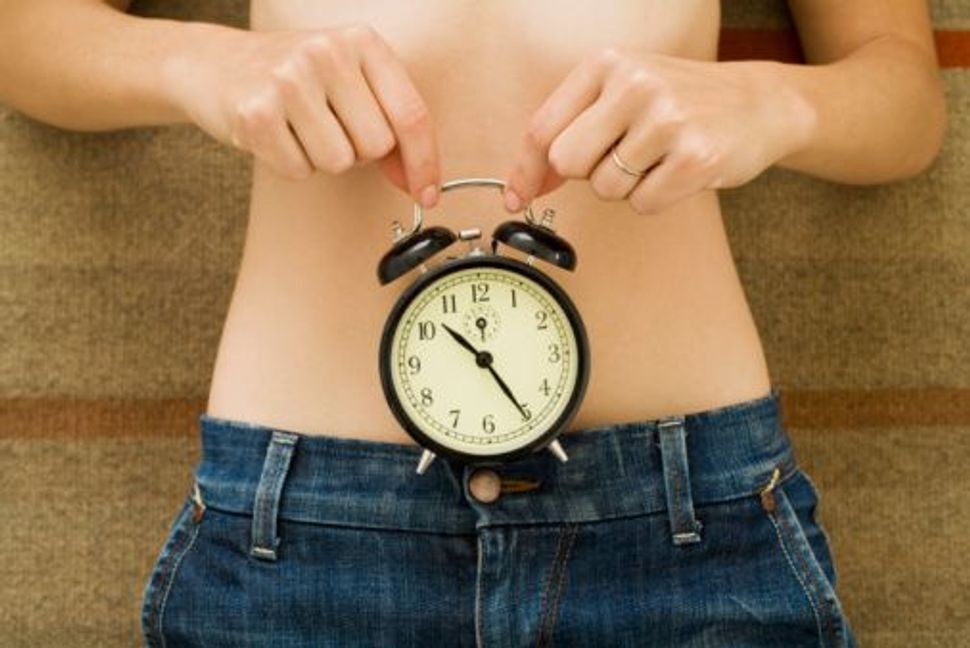 I am not a grandmother — yet! But my friends who are blessed with grandchildren tell me that grandparenthood is equal parts pure love and complete wonder. Some even tell me they wish they could have skipped parenting and gone straight to grandparenting. I can’t wait.

Or maybe I can.

According to an article published last May in The New York Times, eager grandparents are taking their daughters’ fertility into their own hands by paying for egg freezing. In today’s world of reproductive technology, it’s never too early to harvest viable ovaries for the delicate, sometimes elusive eggs that represent potential grandchildren. As parents watch their single daughters get older, they worry that their children will age out of their reproductive years. Biological clocks are not simply ticking, they’re booming as loudly as Big Ben.

Before I get into the details, I should note that freezing your daughter’s eggs is not an extreme alternative for a particular kind of mother. Back in the day, when I was closing in on 30 without a single marriage prospect, I don’t doubt that my mother would have considered taking me to a fertility clinic for the sake of her own grandmotherhood. Truth be told, I love that I have a feasible option in case my daughter’s baby timeline is not exactly in synch with mine — or biology’s. And if she’s on the other side of 35 without a partner, she can still be a mother if she so chooses.

Perhaps at this point I should mention I may be getting ahead of myself: My daughter is only 18.

In that same New York Times article, Rachel Lehmann-Haupt, a journalist and the author of “In Her Own Sweet Time: Unexpected Adventures in Finding Love, Commitment and Motherhood,” calls the negotiations that happen when grandparents advocate for egg-freezing “the post adult-birds and the-bees-talk.” It’s telling that the article does not mention that after years of romantic disappointments, Lehmann-Haupt decided to freeze her eggs at 35. As she recounts in her book, at $15,000 it was not a cheap choice, but for her, it was an essential alternative.

Lehman-Haupt came of age in the mid-90s, when another journalist, Sylvia Ann Hewlett, caused a stir with her book, “Creating a Life: What Every Woman Needs to Know About Having a Baby and a Career.” Hewlett set 35 as a firm age by which to have a first baby. She may have had biology on her side (after 35 a pregnancy is routinely treated by physicians as high-risk), but her ideas couldn’t be reconciled with modern love and 21st-century life. Lehmann-Haupt saw Hewlett’s clarion call to start a family earlier as a hard proposition and was determined to draw “a new roadmap of [women’s choices].”

Lehmann-Haupt’s decision to take charge of her fate and freeze her eggs is part of a growing social revolution chronicled on Web sites like RetrieveFreezeRelax.com, founded by Jennifer Hayes, and Brigitte Adams’ Eggsurance.com. Hayes notes that most women “are still under the impression that the process has a very low success rate. That was true five years ago. Not so anymore.” Eggsurance.com, the more impressive of the two sites for its depth of knowledge — including step-by-step guidance for women who freeze their eggs — has a tag line that sums up the goals of women who want to take explicit control of their fertility: “For proactive women who want to ensure they have the option of having children — just not now.”

For all the progress that reproductive technology has made in the last decade, the American Society for Reproductive Medicine still considers egg freezing experimental. But as the science continues to be refined the label is bound to change, and so too are the emotions attached to the process. What hasn’t changed is that a significant number of women want to become mothers — and they will go to great lengths to make that happen. Egg freezing was still an unproven technology when Lehmann-Haupt was in her early 30s, but I predict it will eventually become the gold standard that frees women to become mothers regardless of their timing or relationship status.

I may be ready for grandchildren, but I am, in every permutation, pro-choice. If that includes my daughter bypassing motherhood for her career and her passions, then that’s her business. I just want to go on record as saying that I am available for babysitting when the time comes.