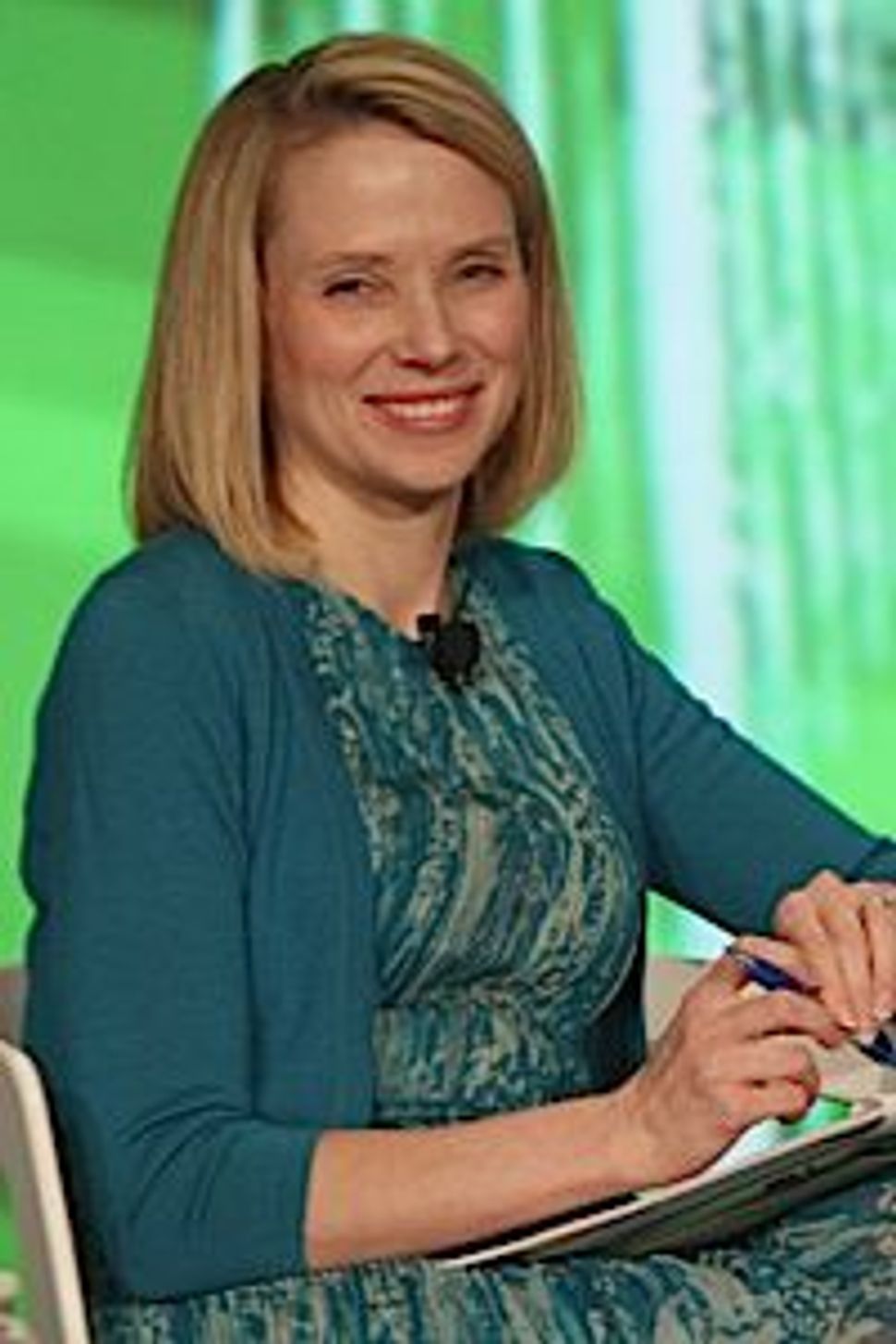 It’s true that Mayer is one of just 20 women to be a CEO of a Fortune 500 company, and “the only one to take the job while pregnant,” notes Lisa Miller in her profile of Mayer in the current issue of New York magazine. The day Yahoo announced Mayer’s hiring, in July, Mayer made public the fact that she was pregnant.

Mayer’s taking the post just two and a half months away from giving birth to her first child has made her perhaps the most-scrutinized working mother ever on the national stage.

According to Miller, “she appears to exist as a living, breathing rebuttal to the Atlantic’s recent ‘Why Women Still Can’t Have It All’ cover story.” Miller writes:

Sheryl Sandberg might agree. Sandberg, who grew friendly with Mayer when they both worked at Google, is the chief operating officer of Facebook and has been promoting a message recently that is, for her, somewhat new.

“Before this,” Sandberg said in a speech at Harvard Business School earlier this year, “I did my career like everyone else does it. I never told anyone I was a girl. Don’t tell. I left the lights on when I went home to do something for my kids. I locked my office door and pumped milk for my babies while I was on conference calls. And people would say, ‘What is that sound?’ I would say, ‘What sound?’ ‘I hear a beep.’ ‘Oh, there’s a fire truck.’ ”

Mayer, Miller writes, has a strong ability to compartmentalize the parts of her life and to treat the fact that she is female as incidental, rather than fundamental.

But that is her choice to make, as is the length of her family leave which, she said soon after announcing her pregnancy would be just a few weeks long, and that she would work while on leave.

I enjoyed my only real opportunity to be in the new-baby bubble, when my first was born and I had six months of union contract-guaranteed family leave (albeit mostly unpaid). By the time I had my third baby, I was working two-thirds time for a company which gave part-timers no family leave at all, and so took just a week off before starting to file stories again.

But as nice as it can be to have that bonding time, for some of us it would be even nicer to be a hugely-paid corporate leader (with a base salary of $1 million, plus innumerable compensatory “sweeteners”) who undoubtedly has all the pricey baby nurse help she could possibly want.

And the fact that there is no one-size-fits-all maternity leave for women, especially those in the top ranks of corporate life, is not the point.

What is surely more trenchant is whether or not the choice to take a longer leave is offered to Yahoo employees (I could not find anything online about their family leave policy) — and those in other companies, for-profit and not — who wish to take it.

The fact that “at last, that fertility, intellect, and big ambition can sometimes co-exist,” as Miller puts it, indicates that we have come a long way since the days, just a few decades ago, when women had to quit their teaching jobs the moment their pregnancies were visible.

But the fact that we’re talking so much about Mayer’s symbolism indicates that we haven’t yet gotten far enough.