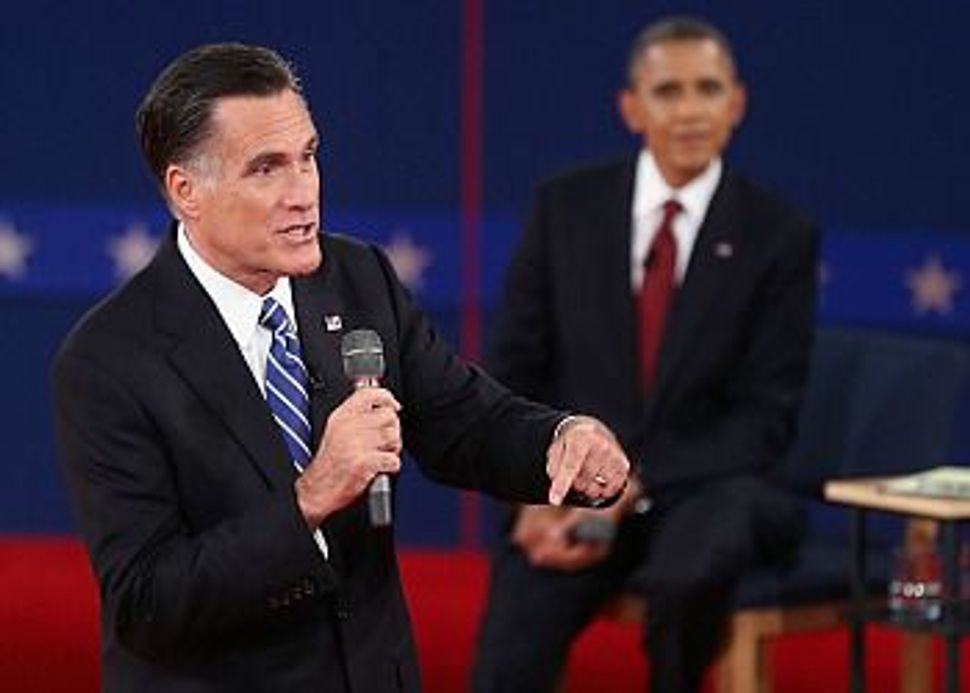 Barack Obama And Mitt Romney in the second Presidential. Image by Getty Images

After watching two long debates in which the only “women’s issue” raised was in the context of two men’s faith, I had little hope going into last night’s town hall.

And wow, was I surprised. The evening felt like all women, all the time.

A strong, enthusiastic and even charming Barack Obama emerged out of whatever metaphysical funk was keeping him down last time (maybe he had some of what Joe Biden was having?). Of his own volition, he referred to his support of — and his opponents’ threatened cuts to — Planned Parenthood not once, twice or three times, but four times at least. As I jokingly tweeted, no one would have ever suspected “Planned Parenthood” to be the reference that got viewers engaged in a debate drinking game sloshed!

And Obama also got passionate talking about the women’s issue nearest to his heart, women’s pay equity, describing the women in his family working hard and the glass ceiling his grandmother hit. In fact, by framing everything from contraception and abortion to the pay gap in terms of the economy and family values, he was as animated speaking about reproductive rights as I’ve ever heard him.

But his opponent stepped into an unintentional gaffe when he answered that pay gap question. When speaking about trying to diversity his government staff in Massachusetts, Mitt Romney said, “We took a concerted effort to go out and find women who had backgrounds that could be qualified to become members of our cabinet. I went to a number of women’s groups … they brought us whole binders full of women.”

The phrase was destined to go viral. The Huffington Post reported on on all the “binder” Internet action that exploded moments after the comment, including over 40,000 tweets in one minute, multiple Tumblr pages, a Facebook page, and a new Twitter account, @Romneybinders.

Memes aside, what may be most interesting — and revelatory — about the binder comments is that as awkward and stiff as they sound, they’re an exaggeration of the truth. According to this widely-circulating report from the Boston Phoenix, while a group fighting for gender equality did indeed create such a dossier, it was not requested by the Romney staff but rather sent their way. And the women eventually appointed by the administration went to agencies to which Romney was largely indifferent. As the blogger, David Bernstein, notes, what does it say about Romney that he didn’t have enough women in his own virtual “binder” of colleagues and acquaintances to appoint, and had to seek far and wide for qualified professionals who happened to be female?