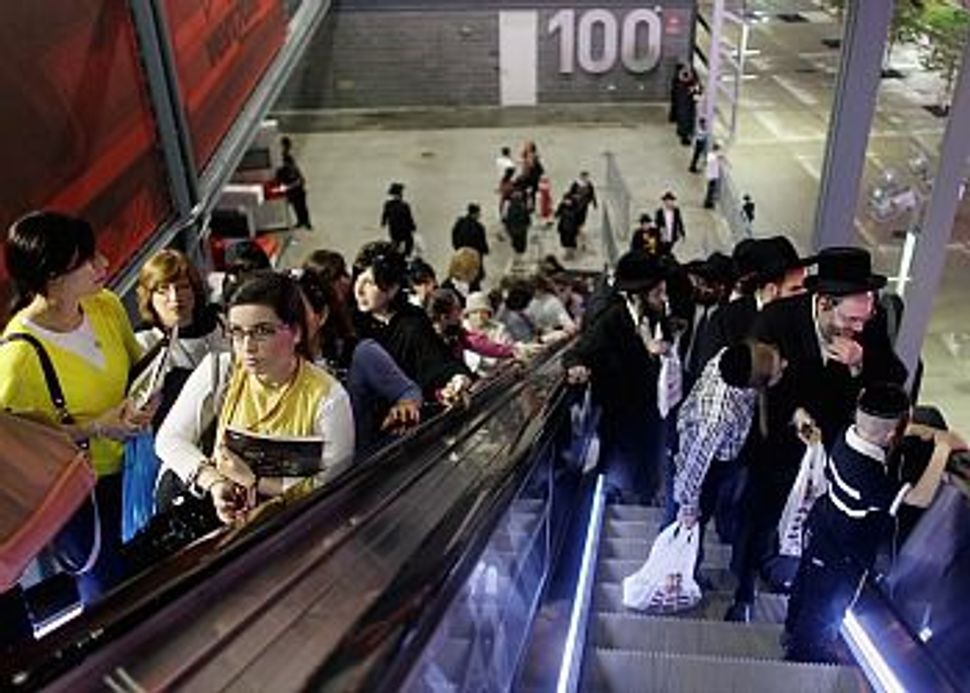 Over the recent (and somewhat endless) round of high holidays this year, I came to some disconcerting realizations about my attitude to shul-going as a woman and a feminist.

Coming from an orthodox background, I have realized that however much of a feminist I am, I still don’t feel comfortable in prayer settings of other denominations where real equality reigns. It’s a dismaying head-versus-heart dilemma, and I’m trapped by it. Why is it that I, a supposed 21st century feminist, still feel more at home in a segregated prayer service than at an egalitarian service where women are fully active participants, not just onlookers?

Again and again, I confess that I betray my feminist sensibilities by seeking out the comfort of orthodox shul settings. And I find myself squirreling away quietly behind the mechitza (the partition separating men and women) in the women’s section, instead of joining in the services as an equal participant, and as a real feminist should.

This year, for Rosh Hashana and Yom Kippur, my husband and I chose to attend a small hasidic (“ultra-orthodox”) shul in our neighborhood of Riverdale, in the Bronx. We usually go to a more modern orthodox shul, which is very large and can be quite impersonal. But I yearned for a more intimate prayer experience — and also hoped the services might not drag on as long!

In spite of myself, and in spite of the huge mechitza looming up in front of me, and in spite of the old-world divisions between the sexes, I enjoyed the whole experience. There was this authentic chasidic warmth in the air. The rebbetzin (rabbi’s wife) made a point of introducing herself and getting to know me. All the other women were very friendly, and the rebbetzin’s little grandchildren ran riot, creating a lively atmosphere. Not forgetting, of course, the rebbetzin’s delicious honey cake served during the kiddush at the conclusion of the services. The whole experience, was, for lack of a better word, heimish.

But of course, while I enjoyed this authentic orthodox service, my feminist self protested wildly, if rather quietly; I couldn’t forget that it was on the other side of the mechitza that all of the real action took place. The rabbi led the services, chanting, singing, belting out the prayers, and while the men joined in loudly, the women’s voices were barely audible. It was also hard even to discern the shofar blower through the thick-netted mesh of the mechitza.

Then, as if to assuage my guilty feminist conscience for such a retrograde prayer experience, I went to the more modern orthodox shul that I frequent (the Hebrew Institute of Riverdale, or HIR) for Simchat Torah. Here, even though the shul is also segregated and has a mechitza, I feel less like a phony feminist and, at the same time, still reasonably at ease given the orthodox prayer liturgy and feel to the place. Unlike the hasidic shul, at HIR, which situates itself philosophically to the left of the orthodox spectrum, the mechitza is low, the bimah (the raised platform from where the Torah is read) is centered directly between the men and women’s section, and most importantly perhaps, there is a woman on the rabbinical staff.

On Simchat Torah, both women and men get to dance with the Torah scrolls in their respective sections on each side of the mechitza. And when it comes to the Torah readings, there are tables set up with Torah scrolls, again in both the women’s and the men’s sections. At each table, people gather around and everyone in the entire community — both women and men — gets a chance to be called up to the Torah and make a blessing. A good number of women get the chance to be Torah readers, too. In spite of my lurking discomfort (coming from my more right-wing upbringing), for the second year running I forced myself to make the blessing over the Torah, and it felt empowering and significant. Yet, I know that I only had the guts to do this because it was in front of a small group of women in the relative privacy of the women’s section. Were I to find myself in a non-orthodox setting, I would feel extremely hesitant at being called up in front of the whole community.

In this setting — orthodox and segregated, yet open to women playing more active roles — I sometimes feel as if I’ve found a working compromise to respond to my dilemma as an orthodox feminist. I’m still in my orthodox “comfort zone,” but I’m also pushed to experience more participatory prayer forms.

I know feminists from other denominations will be wondering what’s wrong with me, having progressed so much further on the road to equality in their own prayer settings. But I know that I share these conflicted feelings with other feminist women — and men — from orthodox backgrounds who still struggle to reconcile the demands of feminism with the standard orthodox shul-going habits to which they are accustomed.

What I’ve realized is that the traditionally orthodox model of Judaism I was brought up to follow is ultimately the one I still perceive of as the normative model — and the one with which I’m engaged in an ongoing struggle. When it comes to shul-going, it’s just so darn hard to shake off all those deeply embedded, nostalgic childhood memories of being up in the “ladies’ gallery” with my mother, grandmother and sisters at our strictly orthodox shul, watching the men go about all the action on the ‘dance floor’ below.

However strong my feminist beliefs may be, they may still be trumped by the familiarity of the orthodox Jewish practices I was brought up with.