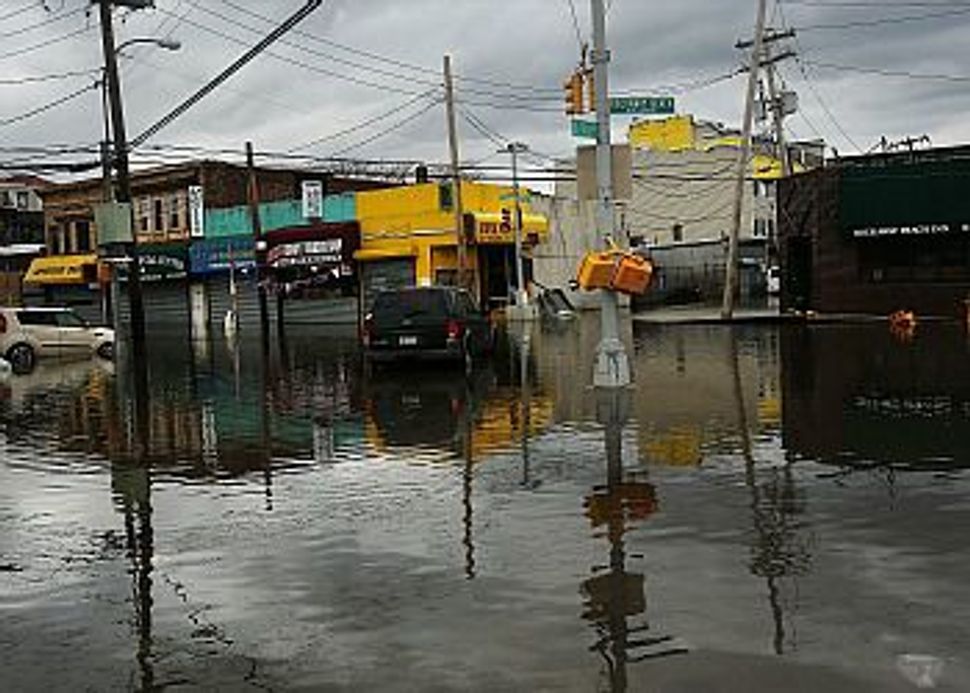 Flood damaged streets in Queens due to Hurricane Sandy. Image by Getty Images

My brother and I used to tease her for being an alarmist, but then the weather began to change — noticeably — over our own lifetimes. And so eventually, as these things often go, it became like mother, like daughter. I morphed into that Debbie Downer at brunch, talking in hectoring tones about how climate change was going to ruin everything, starting with the apple crops and ending with global famine and the zombie apocalypse. Well, maybe not the latter. You see, as a part-time news editor at a progressive website, I’d been posting items about the small, localized side effects of climate change that made me more willing to accept the truth in the bigger changes.

For instance, here in the Northeast we have small-seeming trends that nonetheless show evidence of a major shift: maple syrup shortages, failed apple crops, fir trees dying, covered bridges washing away in storms. Even twentysomething kids who used to seasonal work at ski mountains now have to go to soup kitchens due to warm weather.

In New York City, the evidence has been all too tangible (balmy Halloweens, unbearable Junes). And between hurricanes Katrina and Irene, there were growing reports of the vulnerability of the city to the new superstorms — the Battery, the tunnels, the subway systems, reports that predicted much of Sandy’s damage.

Again, all this personal evidence made it easier to think globally about water shortages, war, famine, coastal communities washing away, constant storms and droughts. You get the picture; I’ll stop before my paranoid fantasies end up with my grandchildren caught in a world where most must stay on a dying planet and the ultra-rich follow Newt Gingrich’s descendants to a new moon colony.

As I sat down for dinner with my husband during Sandy’s height, I expressed my fears about our future family in this new reality, whenever and however both the reality and the family show up. We concluded the only thing one can conclude if one wants a family: that the world is a cruel and arbitrary place with or without climate change, a place of sorrow and injustice only ameliorated by a few golden moments with loved ones.

Yet it’s those moments that are going to be affected unless we act — this is my fear and my hope, too. Because this isn’t just about abstracts, now. It’s about ourselves. Will our kids get to run out and taste snowflakes on their tongues each year? Will they be strangers to sledding? Will the beaches on whose shores we bodysurfed erode out of existence? More likely, will we have to hunker down in constant fear of storms like Sandy? Will those we know get hurt or killed in the kind of freak weather incidents that are becoming more and more common? The answers to all of these questions depend on whether there’s the political will to do something, and fast.

Some of these predictions, both dire and superficial, will come to pass and some won’t. But maybe Sandy has at last woken up a swath of powerful and insulated people on the East Coast to the idea that even though we can’t stop climate change, we should act with all our might to slow it down.