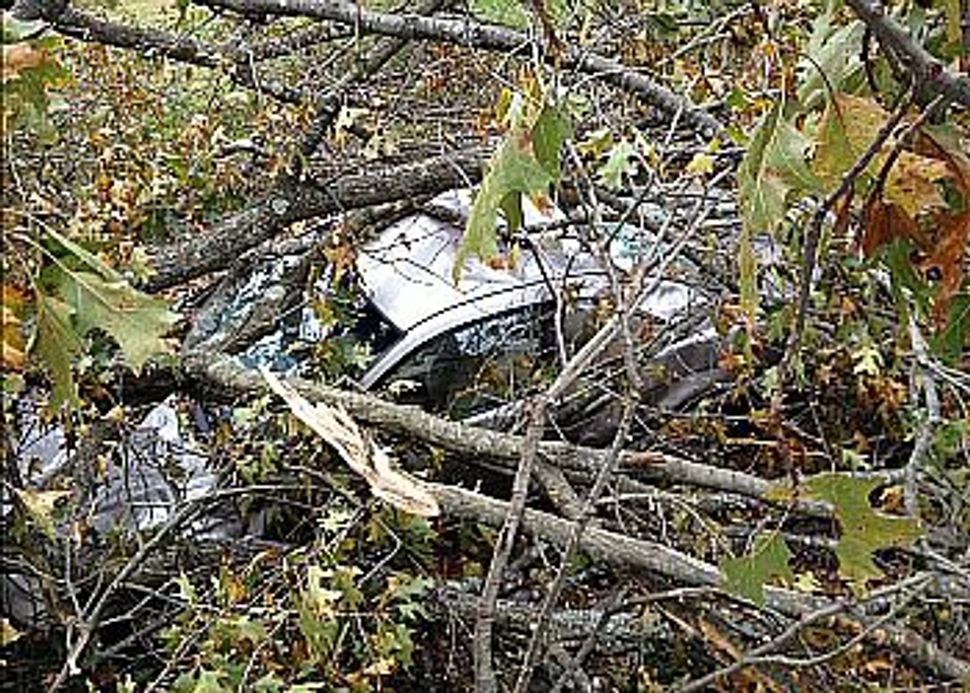 When the tree crashed against the house and spilled its leafy branches across the driveway, it came to a crunching stop on top of my car, taking down power lines along the way. I couldn’t get very close in the dark confusion of the storm, but the next day, after a man with a chain saw cleared me a path to the driver’s side door, I removed all my belongings in preparation for the inevitable towing and demolition of the vehicle.

I leaned carefully onto the seat — the interior was strewn with broken glass — and unwound from the rear-view mirror the little Traveler’s Prayer that I’d hung there years ago when the car was still new.

In preparation for Storm Sandy, I’d gone to my parents’ house, about 75 miles away from where I live on the same Connecticut coastline, so I could help them in the powerless days we knew would follow. Now we were trapped — literally, by the fallen trees and wires — in their house, and I was unable to help anyone, even myself. We could only wait.

When we finally got out, we found a very New England scene, with wrecked suburban yards and people in puffy vests standing on line at Dunkin Donuts for hot coffee. But inside my family’s house it seemed that, along with our unwilling regression to a less complicated way of life, we had somehow become more Jewish.

As the freezer warmed to fridge-like temperatures (and the temperature in the fridge grew slightly warmer than that in the house), we ate the remains of an enormous honey-cake I’d baked for Rosh Hashanah, frozen and forgotten about.

We piled on layers of clothes, skirts over pants and coats over coats, looking like refugees hastily banished to a forest. We increasingly began to resemble the bulky peasant ancestors in the black and white photos in family albums, bundled against hardship and Eastern European snow. My Mom said, “Remember those Russian short stories where the whole family sleeps on top of the stove?” I replied, “They must have had a different kind of stove.”

We found, among the hurricane candles and tapers, a yahrzeit candle in a cupboard. My Mom lit it, saying “Oh well, it must be someone’s yahrzeit.”

I also contemplated lighting all of the menorahs in the house (how do menorahs accumulate like that?), until I remembered how briefly Hanukkah candles burn. The truly Hanukkah-like object was my Mom’s little Samsung cellphone, which retained its battery for days after my iPhone had gone dead. (As I write this, six days in, that little phone is miraculously holding on.) It struck me, on night five with no power, how much more brilliant candles are than flashlights. We don’t normally celebrate Shabbat in our secular family, but there we were, partially observing it by sheer necessity. Fire is significant in many traditions, but those tiny flames, warm and moving and almost alive, suddenly seemed particularly Jewish to me. Perhaps that was why, while the storm still raged, my Dad instinctively began lighting candles as soon as the lights died, ignoring the flashlights collected on the kitchen counter.

In the driveway, as I took the Traveler’s Prayer (or to use its cheesy trademarked name, “Baruch Ha-Car”) off the mirror, my first thought was something like Well, that didn’t work too well, did it. But then I considered that perhaps it had. It was true that over the almost 100,000 miles I’d driven in that car, I had never encountered any of the horrors the Tefilat Haderech beseeches God to ward off. “May You rescue us from the hand of every foe, ambush, bandits, and evil animals along the way, and from all manner of punishments that assemble to come to earth.” No specific mention of Storm Sandy, although I suppose a car sitting in a driveway can’t really be said to be traveling.

My own apartment has electricity now. But my parents, like hundreds of thousands of others, will likely be spending more days in the cold. I’ll be going back there, mostly to deal with my car situation, and to help if I can. I’m wondering what other reminders of Jewish life will emerge unexpectedly from the darkness.