Why I’m Nostalgic For Hasidim 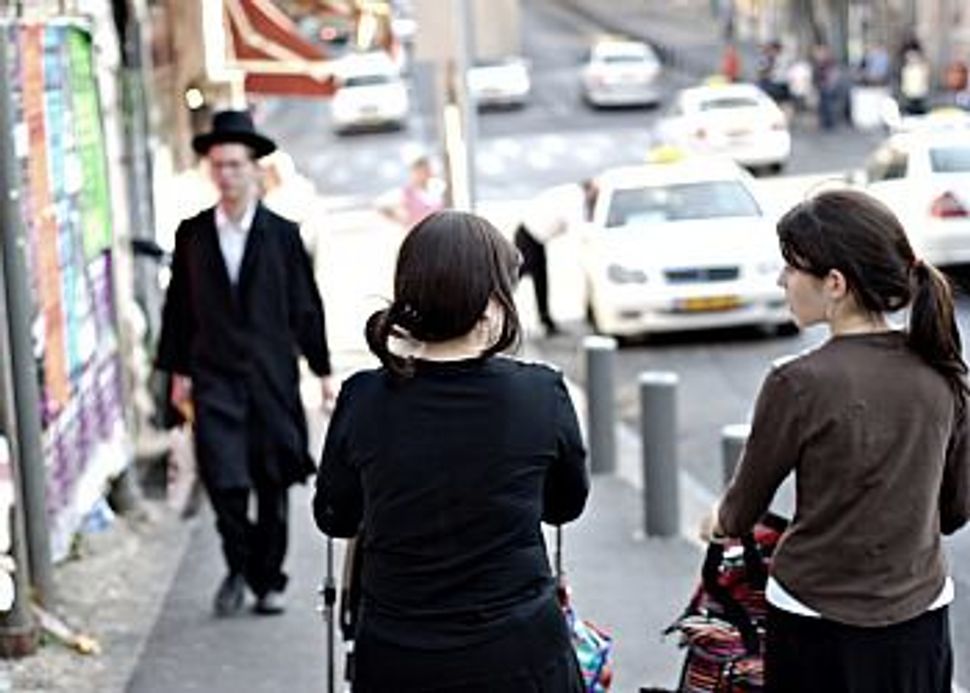 While attending a major Las Vegas tech conference for work a couple of years ago, I found myself following a Hasidic couple around the convention center. Their presence at the tradeshow was not completely shocking — many religious Jews work in consumer electronics sales (just look behind the counter at B&H in New York City — but I was delighted to catch a glimpse of them. We made our way slowly through the tightly packed throng gawking at the gargantuan Intel Booth — they, making casual conversation about operating systems in Yiddish, and I eavesdropping gleefully from a few paces behind. The wife doubled back for a moment and bumped into me. “Anshuldik mir,” I squeaked. Excuse me. The look of utter surprise on her face stayed with me for weeks.

Some of my cousins happen to live in a town in Orange County, NY, adjacent to the Satmar Hasidic enclave of Kiryas Joel. Whenever I stay with my (completely non-religious) cousins, I feel compelled to pay a visit to the small shopping center in Kiryas Joel. I get a thrill from the supermarket, with its Yiddish signage and patrons shopping for Cholent ingredients (packaged meat is even labeled exclusively for this purpose). I stop to browse through the rack of Yiddish children’s books outside the clothing store (only children would read for pleasure in Yiddish in this community). I can’t overstay my welcome; tourism isn’t exactly encouraged in Kiryas Joel.

The truth is, I find myself seeking out Hasidic enclaves and stories wherever I am, so that I might catch a glimpse of this culture that split off from my own. That’s why I get immense pleasure from people-watching in Williamsburg on Friday afternoons. It explains how I found myself ambling in the ultra-orthodox Mea Sharim neighborhood in Jerusalem three years ago, even though the Yiddish street signs told me that my style of dress was prohibited (I wore jeans). Even at home in Los Angeles, I invented a game called “Spot The Eruv,” to be played each time I pass through the Pico-Robertson neighborhood. The stack of books on my nightstand invariably includes a juicy memoir written by a former member of the ultra-orthodox community. Have any recommendations?

I’m not exactly comfortable with my apparent objectification of Hasidim and slightly voyeuristic (yet earnest!) interest in their communities, but I have given it a lot of thought. I know I’m not the only almost-entirely-secular Jewish woman with uneasy curiosity about Hasidic life. If I were, Deborah Feldman’s “Unorthodox,” published in February of this year, wouldn’t be the 34th best-selling religious memoir on all of Amazon.com. But I might be one of the few for whom Hasidic culture inspires a non-religious longing for something otherwise gone from the world — the vestigial remnants of pre-war shtetl life, rose-tinted and back from the future. I do love a good time-travel story, and what are Hasidim to me but a people seemingly plucked from their natural place and time (say, Poland in the 19th century), and settled in our midst. I could’ve taken up an interest in the Amish or Mennonites, but those anachronistic cultures don’t represent my personal history.

The Hasidim are the closest I’ll ever get to seeing what my life might have been like in a disrupted alternate-history version of Europe where the Holocaust didn’t happen. Where Yiddish is still spoken in the streets (which is why I’ve tried to learn it). Where cholent and gefilte fish are haute cuisine (a present-day secular trend without my help). Where women know their neighbors, help raise each other’s children, and bask in the kind of easy, sheltered ignorance where every shopkeeper and service provider is Jewish (which is why I sometimes try to absorb a bit of that communal feeling as a stranger among them).

Some historians say shtetl life and Yiddish culture would have been dismantled by the 21st century even without Hitler’s help. Could be; modernity’s a tough force to shake off. And I know my whitewashed version of the Old Country™ and present-day Hasidic life glosses over the glaring, dangerous and painful downsides: abject poverty, endemic racism and sexism, lack of freedoms of choice and expression, stifling rigidity. But we’ll never know what might have been. I’ll never know what it would really have been like to grow up a Jewish girl in Southern Poland or what it really feels like to live as the closest modern day equivalent in Borough Park — wearing a sheitl, visiting the Mikvah and averting my eyes. Even with that understanding, I’ll probably always look and listen for them with a tiny bit of envy and nostalgia for a life I was spared.

Why I’m Nostalgic For Hasidim