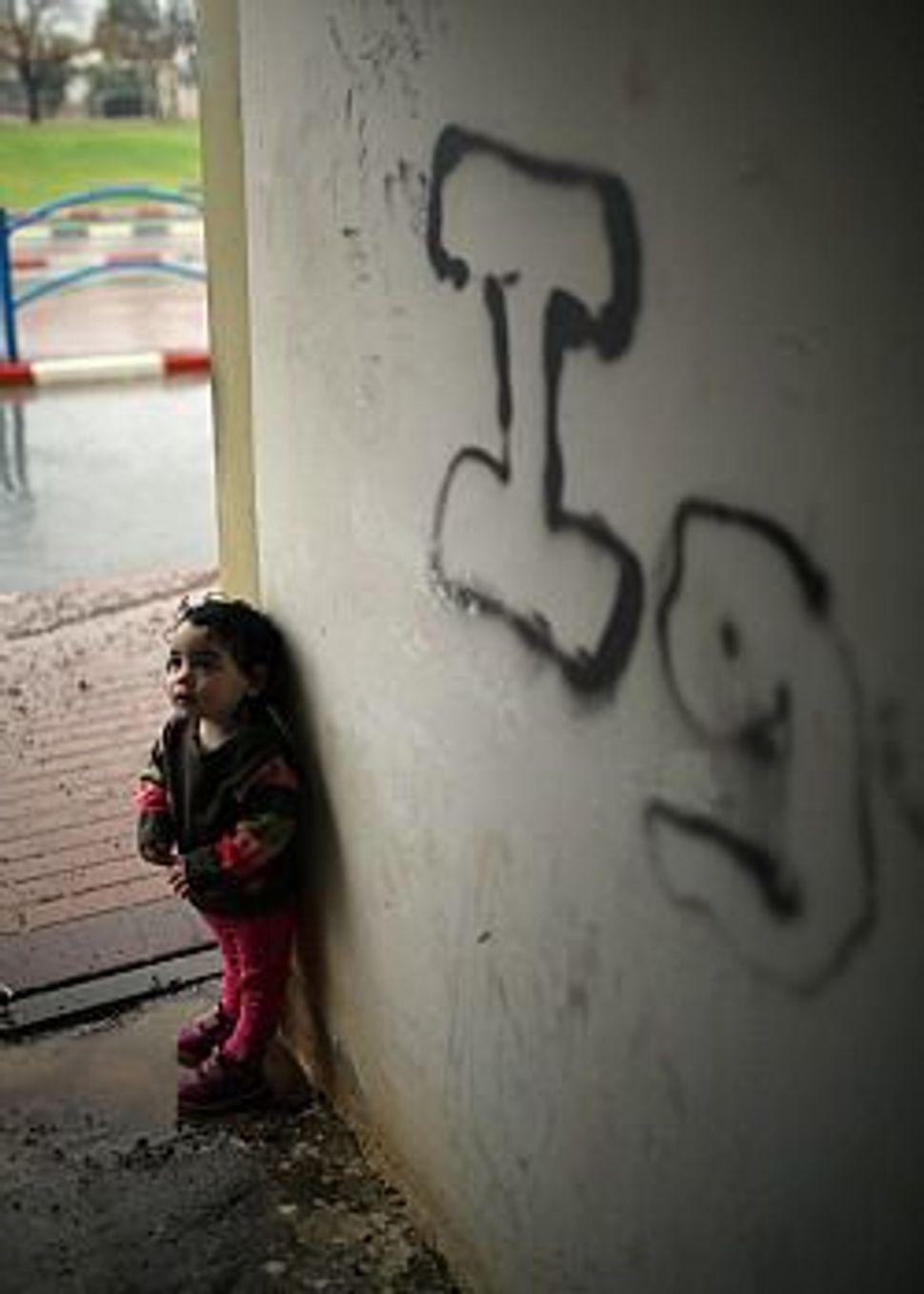 A two-year-old puts a bomb shelter to another use as she and her father take cover from rain on November 23, 2012 in Sderot, Israel. Image by Getty Images

To protect has always seemed to me to be the first duty of the parent. Living in Ann Arbor, Michigan, with my husband and three young children, I knew what it was I wanted to shield my children from: violence, fear, social disorder so profound that it would unsettle their very sense of safety in the world.

Last year, when I began to volunteer in an inner-city school in Detroit, my challenge was not to explain to my own children the violence the Detroit kids faced on a daily basis — that did not even occur to me to discuss; it was way too scary. Instead, I had to confront the unbearable injustice of limited opportunity, as well as the effects of an inheritance of racism. It was painful to me to talk with my eight-year-old daughter about the fact that the Civil Rights movement, which she had studied, had left some problems unsolved. “Til today?,” she asked, in disbelief.

In late August, my husband, Ori, and I took our children to Israel, where we planned to spend a sabbatical year. Both of us had lived there previously, Ori for eight years, serving a full-term in the army in the early 1990s, and myself for two years in the same era, with many summers spent in Israel since. I was also born in Israel to American parents who lived here at the time, and my grandparents and paternal aunt and her family all made their lives here. My children have all visited before, too. They speak and understand Hebrew to varying degrees, and when we were still living in Ann Arbor, they attended schools that were replete with Israel-activities and study.

Just as the Holocaust was one historical trauma I shut out with children so young, the Arab-Israeli conflict was nearly absent in our home. We had a single storybook that described two children, one in the Jewish quarter and one in the Muslim Quarter of the Old City of Jerusalem, taking joint custody of a pregnant cat on a snowy winter day. The snow was the adult secret: that this story was highly anomalous, that it was the exception that proved the rule of war, conflict, mistrust, and the impossibility of sharing.

We arrived in Israel with this storybook, along with many others written in English. And we have read them happily at night before bed. But over the past week, bedtime stories have largely been replaced by lying in bed with our children, holding their bodies, listening to their questions and worries, letting them tell us their stories.

A war has broken out. We don’t yet know if it will be a full-fledged war, ground offensive and all. Even now a ceasefire is in the offing. But for more than a week, rockets have been falling all over Israel, including immediately outside Jerusalem where we live. Citizens across the country are rushing to shelters, scrambling for safe spots at the call of sirens, which have become so frequent in some cities that schools and workplaces are closed indefinitely. The Israeli army is bombing Gaza City from the air, hoping to confine its attacks to major weapons stockpiles and known terrorist infrastructure, but inevitably killing and wounding innocent civilians, too. Seventy-five thousand reservists are waiting for orders, and my children personally know four young soldiers standing on the edge of Gaza at this very moment.

And suddenly my assumptions about what it means to be a mother are radically altered. To protect, yes, always. To insure their physical safety as best as I possibly can. But, clearly, there are things I can no longer protect my children from.

Last week, Priya came home from her third grade class school asking what bad man was killed. This was J’abari: responsible for the kidnapping of Gilad Shalit, among other things. He was assassinated by the Israeli military. When I asked her how it came up, she said someone mentioned his name in school and the kids broke out in cheers at his death. As she told me this, my five-year-old-son, Shai, demanded to know what she was talking about. “A real bad guy?” he asked. Yes, a real bad guy, I was forced to concede.

Reality has arrived in my children’s lives in the form of current events. “Is this a war?” “What is a bomb?” The questions go on and on: Does it have the shape of a ball? Does it explode immediately when it hits the ground or after rolling: as in, could it roll down the stairs to our basement safe space, and only then explode? Who is setting off the rockets? How much of Israel does the rocket dome cover? Is it a real dome? How is it a battery?

For a few days, it seemed unlikely that the rockets would affect us. We explained that the rockets could only with great difficulty reach Jerusalem; that the city was an unlikely target because there are many Arabs here, and that the Al Aqsa Mosque is here. Then last Friday night, the first siren went off as Shabbat began and we learned the protocol for safety. As our family of five sat together in a basement area, my husband and I clarified to our children from Michigan that this was not a tornado. Shai, frightened, repeated, “I think it’s just a practice,” and Tzipora, two and a half, sat quietly on my lap instead of jumping off it as she often does.

One day last week, the siren went off as Priya was leaving her school and the children crouched down in the parking lot next to parked cars with their hands over their heads in the absence of an indoor space close enough to reach in the 90 seconds of safety from siren to rocket landing. We have gone from a circumstance in which I didn’t want to shock my daughter with the abstraction of economic and racial injustice to her crouched in a parking lot with her hands over her head.

Why don’t we go home? the kids asked on Friday night.

We are not going back to Ann Arbor, because there is no going home if going home is in part going back to an entirely benevolent world without the sometimes-divisions of us vs. them. We live in a world in which war will break out despite all the good people, despite the political party you believe in and vote for with conviction, despite the beloved and vulnerable children on both sides.

The strange thing, the thing that has prompted me to write at all, is that I don’t feel awful that my children have been plunged into this zone. I don’t feel I have betrayed my foremost duty as a mother. I don’t have the impulse to return them to civilization or to wish for the impossible: turning back the clock.

Violence and war are with us, inescapable. My children have now, to some extent, joined the children of the world who are closer to being adults than to being babies; I see them now on the other side of a certain divide of worldliness and knowledge. They have a knowledge they will have until death. So now that they have crossed over, it is my job to speak honestly, and to bring them up to be people who work for peace and do not thrive on war.

I need also to reassure without lying. At night, holding their bodies, I can say that the Israeli army is one of the strongest and most resourceful in the world. I can praise their intelligence missions, on one hand, and the efforts they make to get civilians in Gaza to leave their homes before new airstrikes begin, on the other hand. I can describe the powerful support America (“home” ) provides here. “Really?” asks Priya, with a sudden lift to her voice, as if I have promised a consoling food from home: “America is going to help here?” All that is practical reassurance. The reassurance of feeling strong.

Then I can talk about fear and how fear makes sense. That life has its scary, terrifyingly uncertain moments, and that we need to know how to live with fear, whether as children or as adults. I can talk about peace, especially in the minutes before sleep: how the brachot, the blessings we give and ask for, and the tefilot, the prayers we utter, are talking about something urgent and elusive, necessary and elemental as rain, and yes, blessed as rain. Peace. The word “shalom”: my son Shai’s given name.

In the morning hours, bright with sunlight, I can talk about the other side, especially when my children react with anger and animosity toward all Arabs. It’s natural, for many reasons, when you are in the basement in the dark hoping a rocket does not strike, to hate the enemy and everyone associated with the other side. But there is now the mission to teach that the land is ours, but not only ours. To say that there are things more important than square feet of ground in spite of the fact that we are not going anywhere, because at times, there is nothing more important than standing your ground.

It all has to do with Martin Luther King, I can say to my daughter, enamored of the Civil Rights movement. It has to do with the idea that we judge people by the content of their character and not by the color of their skin. I can tell her that peoples and religions are multifarious, hard to grasp, and you don’t know any Arabs. Let’s wait to judge. Let’s change the way we live. Let’s meet people we don’t know.

I cannot prevent my children from learning in the midst of a war, from making friends under these circumstances, from growing up, this year at least, in a world less benign than the one they knew a few months ago. I don’t want to prevent them from this. Wherever we choose to live, we must really live there. In Ann Arbor, most danger is avoidable, whereas here, it is not. Having met the danger, it is time to write new stories.