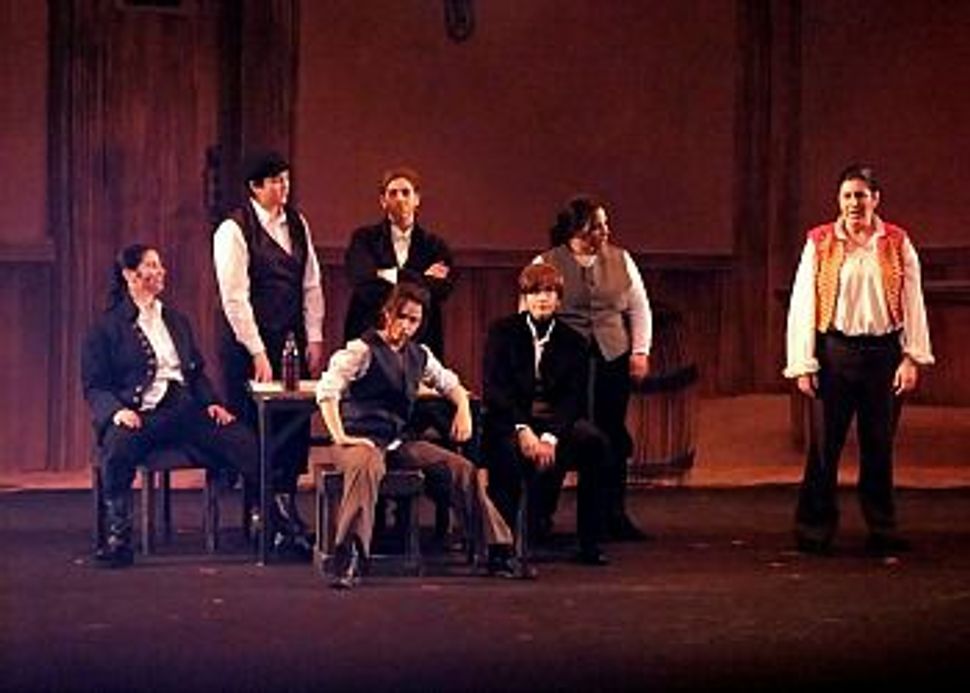 I’m not a theater buff. “West Side Story” is the only musical with which I have more than passing familiarity. So when a friend sent me an email invitation to see her perform in a community theater production of “Les Miserables,” I nearly passed it over. But upon further inspection, I realized this was no ordinary production. This cast was comprised of Jewish women. Men, in fact, were not allowed — not on stage, and not in the audience. This rendering of Les Miz was the fifth annual production of the Los Angeles-based Jewish Women’s Repertory Company. Three performances at a 400-seat venue scheduled for December 1 and 2 were nearly sold out.

I decided to check out the dress rehearsal. Driving there, I passed a giant billboard for what appeared to be a forthcoming film version of “Les Miserables” starring Hugh Jackman, Russell Crowe and Anne Hathaway. Though I’m clueless, you probably already knew about the movie; it turns out that many Jewish women tend to nurture a particular fondness for this musical. So, too, the more observant ones for whom this all-women production serves as the only outlet for secular performance. At least one-third of the company adheres to the observance of Kol Isha, a modesty law that prohibits men from hearing women’s singing voices.

“When I started the group, I did it mostly for women [who adhere to Kol Isha] and to some extent I still do,” says director Margy Horowitz. “But now it’s half for that and half because we just love the camaraderie of it.” Though some of the women won’t sing when the janitorial staff passes through the rehearsal space, the group did get approval from a rabbi to work with male technical crews to put on the show.

Many of the cast members heard “Les Miserables” as teenagers, and perhaps cultivated a taste for musical theater at all-girls Jewish summer camps or day schools. But most of the performers joined up not because they can’t imagine performing for men, but because there are so few (if any) opportunities for women to sing those choice male-role show tunes from the stage.

When I got to the theater and saw my friend Rona on stage playing the role of intellectual revolutionary heartthrob Marius — a wig, mutton chops and extra eyebrows went a surprisingly long way towards turning her into a dashing and charismatic lead — I remembered that this was not, in fact, the first time I’d seen a Jewish woman play a man.

There’s a fairly rich tradition of female-to-male cross-dressing in Jewish entertainment. Though in the two most famous instances, that cross-dressing is actually part of the plot: Barbra Streisand in 1983’s “Yentl” (based on the Isaac Bashevis Singer short story), and Molly Picon in the 1936 Yiddish-language film “Yidl Mitn Fidl.” Of course, men have been playing women on stage since the dawn of theater (most notably Shakespeare’s plays in the Elizabethan era). But I have a sneaking suspicion that this also occurred with some frequency in pre-war Europe in the form of Purim spiels.

The human mind has a great capacity for suspending disbelief. At least, mine does. Far more noticeable than the femaleness of the male characters were the flesh-colored long sleeves under slightly revealing dresses and non-costume wigs (sheitels) worn by some of the female characters. But even these distractions fell away as the three months of rehearsals and countless at-home practice hours paid off on stage. These women demonstrated a wide gamut of vocal ranges that further aided the believability of their roles, and there’s no doubt each of them relished every moment, even if they can’t share their live performances with their husbands, fathers and brothers.