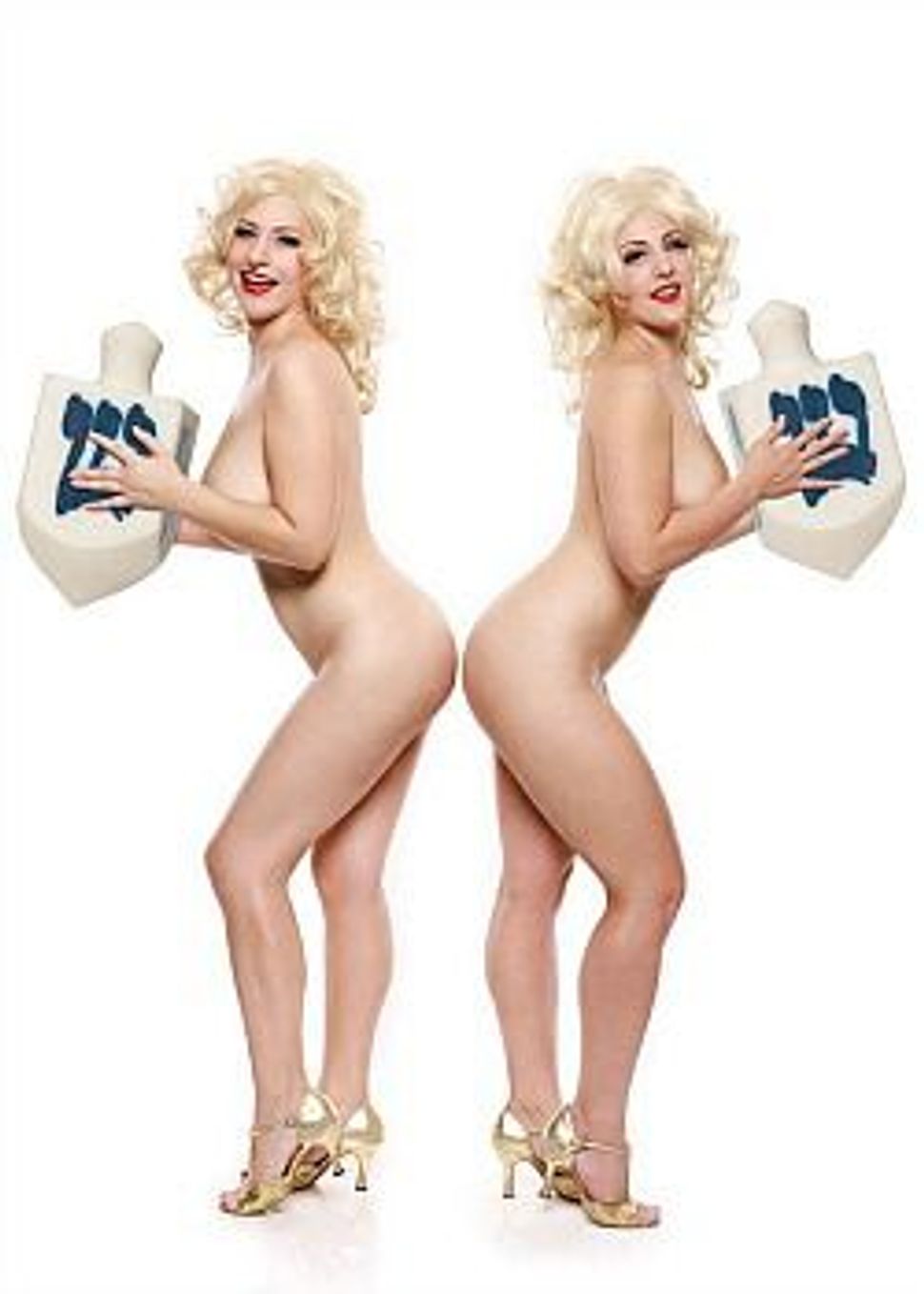 Minnie Tonka and Darlinda Just Darlinda, a.k.a. The Schlep Sisters, will soon be lighting their Hanukkah candles … on stage and in various states of undress. The Brooklyn-based burlesque performers (who prefer to be known only by their stage names) will be appearing in the 6th Annual Menorah Horah at Manhattan’s Highline Ballroom on December 9. This will not be your usual holiday party. As we are warned: “Drop that dreidel and hold on to your latkes. We’re heating up the holidays with Hanukkah’s hottest Hebrew hotties!”

Tonka, a Minnesota native with a Masters in Jewish Education from the Jewish Theological Seminary, and Darlinda, an actress and performance artist originally from California, have been doing striptease together for nine years. Recently, they have devoted themselves full-time to performing and teaching burlesque. They also produce a number of national burlesque tours and shows, including the Menorah Horah and a Passover show titled, The Burning Bush vs. The Second Coming. Both women were named among the Top 50 International Burlesque Industry Figures in 2011.

The Schlep Sisters recently spoke to the Forward about how they got their start in the business, the upcoming Hanukkah show, and what it means to be on the cutting edge of “Jewlesque,” or Jewish burlesque.

THE FORWARD: When did you start performing burlesque, and how did The Schlep Sisters get their start?

MINNIE TONKA: We just celebrated the ninth anniversary of The Schlep Sisters. We met in November 2003 at a social event. Darlinda had recently arrived from California and we were talking about performing, and she was really interested in experimenting with burlesque and I was really intrigued by that. We’re both Jewish, and we decided we wanted to work and perform together, and we wanted to explore our Jewish heritage in a playful way.

Do you always perform as a duo, or do you also have solo careers?

MT: I was more bashful and wanted to have a dance partner to be more comfortable. So I was slower to pursue my solo performance career. It took me a few years to go beyond The Schlep Sisters. Now we perform solo and together…

What’s really unique about us is that separately and as a package as the Schlep sisters, we bring three totally different performance styles. Schlep Sisters are fun and campy. And then our own personalities come through when we do our solo stuff.

How would you describe your individual styles?

DARLINDA JUST DARLINDA: I think Minnie incorporates a lot of ‘80s rock and roll and I tend to more performance-art style. We each have over 30 solo acts. We are both incredibly diverse, which is not the case with every burlesque performer.

How does your Jewishness come through in your Schlep Sisters acts?

DJD: We have 10 Schlep Sisters acts at this point. All of them have some kind of Jewish connection. A lot of it is the music… We use a lot of Barry Sisters.

MT: We’ve done Purim, Passover and Hanukkah shows. We also have an act that references Shabbat dinner. It’s really more about family shenanigans, but we passed out Manischewitz and challah to the audience.

How does Hanukkah lend itself to burlesque?

DJD: With Hanukkah, you’ve got your miracle, latkes, menorah, dreidels. There’s a lot that you can play with there. We’ve been doing the show for six years, and we’ve come up with a different act every year.

MT: With Hanukkah, the symbols are part of American culture in a way. People are familiar with the menorah and the chocolate coins, whether or not they know the meaning. It’s a bit different from our Passover act, where the symbols are even more meaningful.

What is the concept behind the Menorah Horah?

DJD: When we started it six years ago, it was a very simple show. Everyone came up with an act, and we just made sure that everyone had a different theme. At first it was a burlesque Hanukkah party, but since moving it to the Highline Ballroom in recent years, we’ve added whole storylines to the show. This year we came up with the idea of a pageant and everyone is competing in classic — but comedic — pageant categories.

MT: It’s going to be hysterical and funny. We’ve always had eight performers in the Menorah Horah.

Have you ever had any concerns about the propriety of taking your clothes off on stage while engaging with Jewish themes?

MT: I would say 99% of everyone we have ever encountered has been so inspired, excited and validated by the fact that we celebrate our Jewish heritage in this very unique, artistic, creative, fun and engaging way. It’s really been incredibly meaningful to present and showcase this celebration of our Judaism and make it accessible to everyone from every kind of background. It’s encouraged people to have conversations about their own backgrounds and their affiliations with their heritages, whether it’s Judaism or not. It’s something we’re known for, and something that we’re very proud of.

DJD: Jews have had a rich history in comedy and theatre, and show biz has always had lots of Jewish people involved. So I see this as a continuation of our Jewish heritage and history. We never really misappropriated. We really try to have as much fun and be as playful as possible, and all our acts are really well thought out. So in that sense we don’t worry about it, because we come from and are continuing a long line of Jews in showbiz who created the path of what comedy is in the United States today. There is not a lot of Jewish burlesque out there, and we’ve been at the forefront of it.

What advice do you have for women interested in pursuing burlesque?

MT: Burlesque has become so popular in the past five years. There are burlesque shows every night of the week in New York and shows in cities all over the country. I recommend going to see shows and checking stuff out online.

DJD: You can learn so much from seeing shows. There are many burlesque schools throughout the nation and the world. I’m very into education in terms of burlesque, because that’s the only way it can become a serious art form. With theatre you have theatre schools, with burlesque you have burlesque schools. Both Minnie and I teach because we want to help people become better performers.