Did Peeps Go Too Far with ‘Shiksa’ Ad? 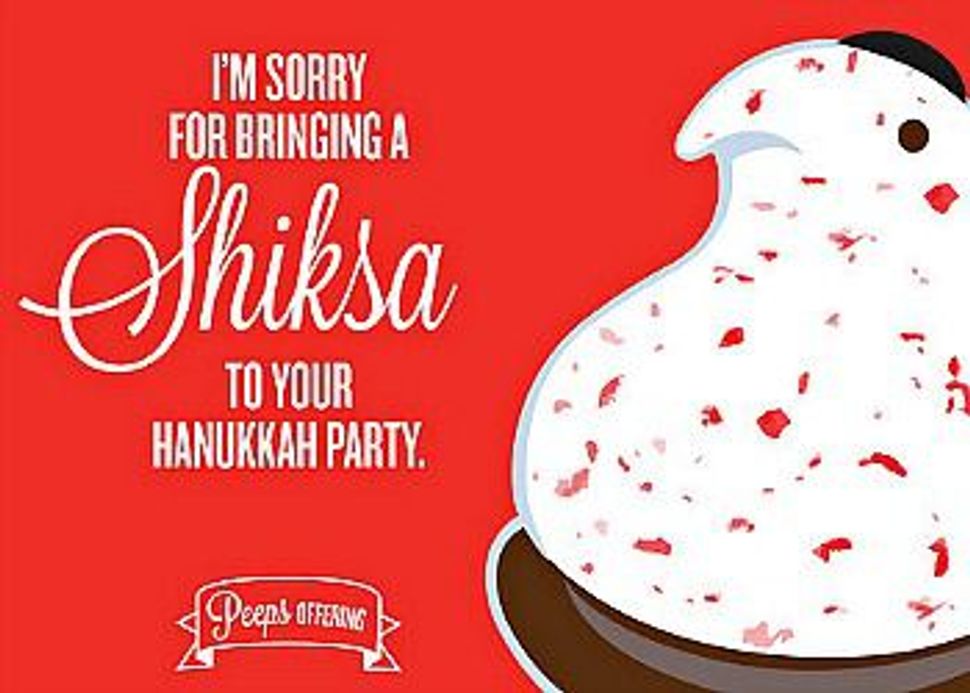 Is the term shiksa as loaded as it used to be? Perhaps, since even a blogger who adopted the derisive Yiddish word meaning “non-Jewish woman” as her cooking website’s name found it an unfortunate choice when the maker of candy cane-flavored marshmallow chicks used it in an ad campaign. Then again, some may find the notion of candy cane-flavored marshmallow chicks icky enough even without Yiddish attached.

Candy maker Just Born makes Peeps — those yellow Easter marshmallows — and recently got itself into hot chicken soup when it put out a Christmas version and promoted it with the image of a Peep wearing a black yarmulke next to the line “I’m sorry for bringing a shiksa to your Hanukkah party.”

It was one of a series of faux-apologetic online cards for people to email or share on Facebook. Others say, “I’m sorry I defriended you. Again.” And “I’m sorry for using mistletoe to kiss your mom.”

When one person complained, Just Born pulled the shiksa part of the promo. “Even though just a single complaint had come in, we valued this person’s perspective as we do all of our fans’ reactions,” said Matthew Pye, vice president of Just Born. “We did not want any distractions from the other “PEEPS Offering” e-cards.”

Tori Avey, who blogs as The Shiksa in the Kitchen and was herself a shiksa before converting to Judaism in 2010, didn’t find the Peeps promo amusing. “I was always welcome to be a part of my family’s Jewish celebrations and traditions, even before I converted to Judaism. Perhaps that’s why it doesn’t seem very funny to me,” she said in an interview via email. “Why would somebody need to apologize for bringing a shiksa to the party? Indeed, why would any Jew be offended that a shiksa showed up? …Times are changing, attitudes are evolving,” Avey wrote. “The idea that a shiksa isn’t welcome in a Jewish home is really outdated.”

Avey loved cooking traditionally Jewish foods long before she adopted the label for her blog. “Several years ago, I began cooking my family’s annual [Passover] seder meal — it’s a big one, we have about 50 guests on average. During one of these seders our friend from Israel patted me on the back and said, ‘This shiksa in the kitchen can cook!’ He said the word shiksa with lots of humor and admiration,” she wrote. “With my passion for cooking constantly growing, the nickname stuck. After I converted, I continued to call myself a shiksa as an acknowledgement of my non-Jewish upbringing… I was born a shiksa. I wouldn’t change that, even if I could. Conversion was a conscious decision made after years of spiritual reflection and careful thought. I chose Judaism as my spiritual path, but I’ll never forget where I came from.”

“By sharing kosher recipes on my website, exploring family food stories and celebrating our Jewish traditions, I’m hoping to remove any lingering negativity from the word ‘shiksa,’” she wrote, calling the term’s use an “outdated idea.”

Did Peeps Go Too Far with ‘Shiksa’ Ad?