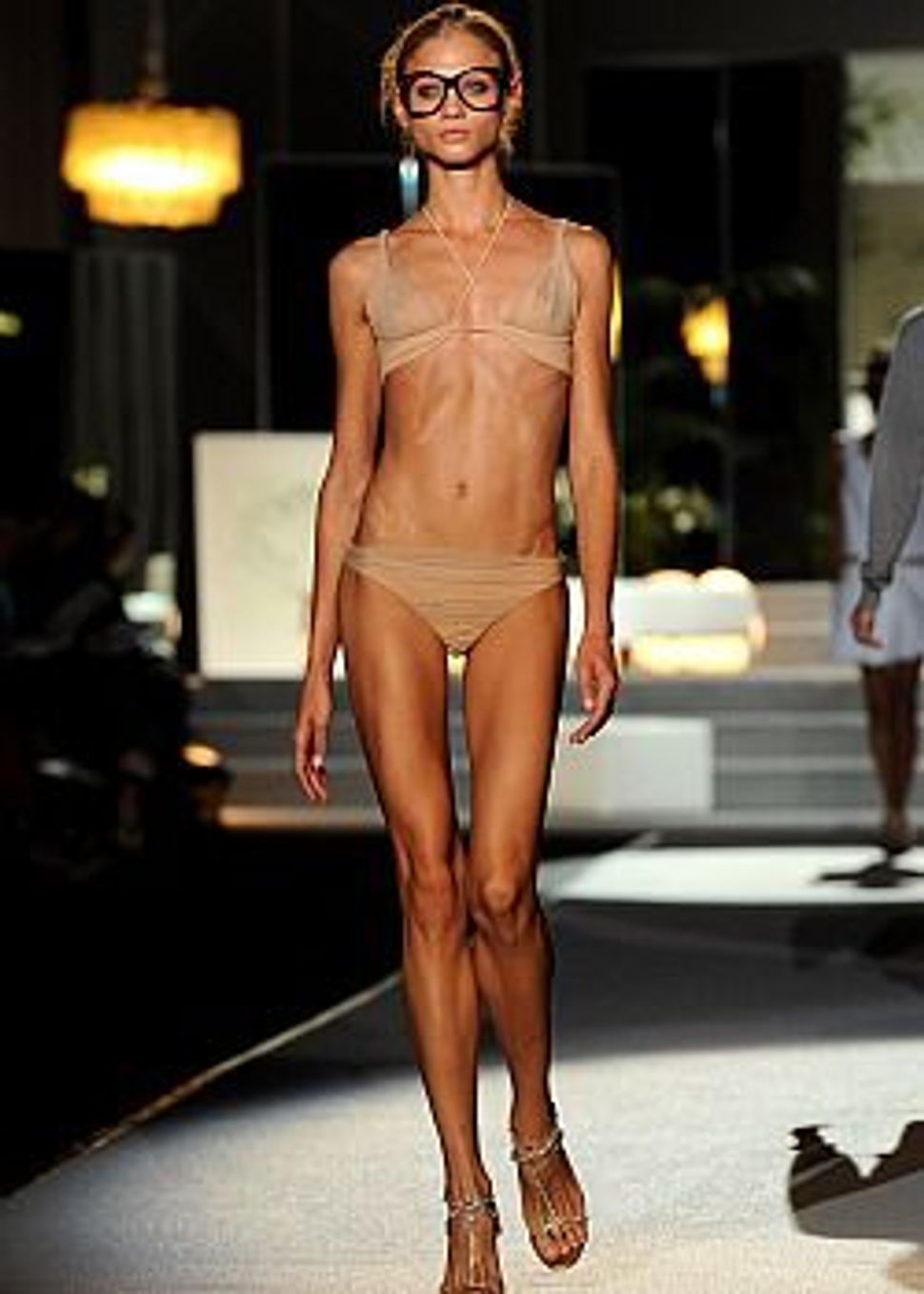 Does this model look healthy to you? Image by Getty Images

Last week, Israel passed a long-debated bill that would ban extremely thin models from being used on runways and in photo shoots. The law states that models must have a body-mass index (BMI) of 18.5 or more — for example, a model who is five foot eight must weigh at least 119 pounds. For context, supermodel Kate Moss, who helped popularize the “heroin chic” look of the early ‘90s, is five foot seven and reportedly weighs about 114 pounds. Israel’s own Bar Refaeli, who has a curvier bikini-model figure, is five foot eight and reportedly weighs in the 125 to 130 pound range.

Many feminists are hailing Israel’s law as a huge step forward for the fashion industry. However, I’m not one of them.

Most of the other laws or public agreements aimed to combat the overuse of extremely young or thin models have not worked. Last year, Vogue magazine vowed that it would not use any models under the age of 16 in any of its editions around the world, but they’ve broken their own rule multiple times since then. American designer Marc Jacobs has also violated rules about paying models for their time and was caught paying some models ‘in trade’ (aka free clothes) and not following labor laws, but he has not been sanctioned in any way by the Council of Fashion Designers of America (CFDA). Perhaps that’s because he is a board member? Spain passed a similar BMI-based law in 2006, and Australia wrote its own legislation in 2010. But Spain, Australia and Israel are all second-tier fashion countries when it comes to worldwide attention and corporate dollars. In order to make real structural changes, the four fashion capitals of the world — Paris, Milan, London, and New York — will have to step up. Simply passing laws about models will not change the real, underlying issues of body image, health and labor exploitation.

Another reason I don’t support Israel’s new law is that I don’t believe in the government policing women’s bodies. Though many current and former models have admitted to having eating disorders or undergoing extreme diets in order to look a certain way or to fit into a particular size, there are others who state that their appearances are natural. It is not the job of the Israeli government — or any government — to regulate how women look, even if it is under the guise of caring about their health. What’s next? A law about what constitutes “too fat” or “too tall?”

The reality is that women come in all kinds of shapes and sizes, and denigrating one body type in order to value another merely shifts our obsession with looks in another direction, rather than eliminating the problem. I was a skinny little girl who had a body more like a boy’s — perhaps the fashion world would have loved my look, but all I saw were female-empowerment messages about how “real women have curves.” Though I was lucky enough to have female role models who encouraged me to love the way I looked no matter what the media said, it’s hard for young women to ignore the conscious and subconscious messages being sent out every time a woman appears in an ad, on TV, or in the street.

The way to fight eating issues and body image problems isn’t by vilifying a body type or by making it illegal; it’s by embracing all women, no matter what they look like, and by caring more about their personalities and their brains than what size their waists are. A better argument is made for the strict PhotoShopping laws in the UK, where beauty and fashion ads who make unrealistic claims or use additional products to achieve their desired effects (like a mascara ad where the model was wearing false eyelashes) are strictly regulated and sometimes banned outright. More transparency is a good thing. If I had known how many hours of makeup and hair it took to get models to look effortlessly chic in fashion editorials, I might not have felt so insecure about my own looks. If I’d known that the clothes were being modeled by 14-year-olds, I might not have felt terrible when my 30-year-old self looked silly in them.

Is regulating the modeling industry the way to eliminate eating disorders and solve all self-esteem issues? Doubtful. We still exist in a world where womens’ bodies are used to sell everything from cars to toothpaste, and where women consistently earn less than men for doing the same work. The more media portrayals we get of all women – CEOs, scientists, politicians, and more — the more that fashion models will become a small sample of women rather than the dominant species. You know, just like in real life.