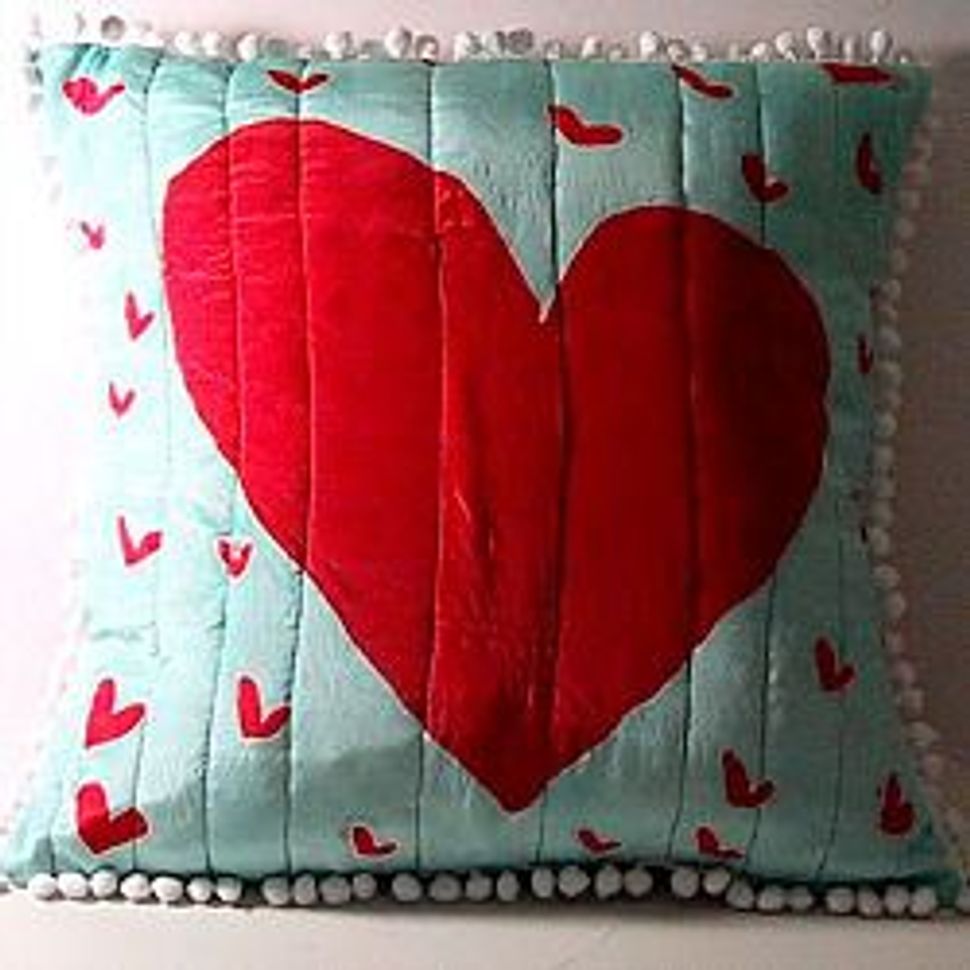 Consequently I a) searched Etsy for glasses cases (and iPhone covers, necklaces and wristlets) and b) read a lot of articles about Chuck Hagel. Articles about Hagel, who has claimed that “the Jewish lobby intimidates a lot of people” in Washington and who was the only U.S. senator who declined to sign a 1999 letter condemning Russian anti-Semitism, tend to rapidly attract infuriating comments (kind of like all writing about anything remotely connected to Jews).

But there was one place on the Internet last weekend where there was no Israel-bashing, no Jew-baiting, no mean-spirited ignorance, and no evidence of Jews taking to their keyboards to rail against each other over small divisions. And that place, surprisingly, was Etsy.

If you’re wondering how I got to Jews from wristlets, you have not yet discovered Etsy’s blog. (Please note that you may lose hours or even days of your life to this fantasy world where all women have perfect haircuts and supportive husbands and knit exquisite scarves. Just don’t say I didn’t warn you.) The blog, which I happened to notice after I gave up trying to choose between approximately 10 billion glasses cases, features selected sellers and their wares, interior decorating tips, mild examinations of social commentary pieces originally published elsewhere, wedding pictures, and all manner of similarly absorbing content.

But here’s the thing: A lot of this stuff is totally, unabashedly Jewish. There are Israeli artists, pictured in their Tel Aviv studios. There are Jewish recipes. There are hand-crafted Hanukiahs. And they’re not just occasional token representations, either; Jews qua Jews are represented on Etsy in numbers that I, an occasional visitor to the site, would never have imagined.

And here’s the other thing: The comments on these posts, which often run into the hundreds, display none of the prejudice, controversy or political bickering that accompany Jewish-themed posts everywhere else.

I wondered, while simultaneously thinking I shouldn’t look a hand-made gift horse in the mouth, why?

It could be that Etsy community managers are extremely diligent in their moderation of comments. They dictate that “the tone should be civil and respectful” and that “harassing, insulting or abusing other members is unacceptable,” as is “being mean.” In almost all of the posts I read, the comments were not merely civil but relentlessly upbeat. This decidedly positive culture might end up driving would-be negative commenters away.

It could also be because Jews are so visible on Etsy. There’s a Jewish Street Team, [EtsyChai] (http://etsychai.blogspot.com/), as well as an Israel Team. (A team, for those as clueless as I, is a group of sellers who promote each other’s shops.) The presence of these teams might make readers prone to lashing out elsewhere online — especially in places they can’t imagine Jews are looking — hold back here.

Etsy is a largely female space, and the stereotypical Internet aggressor is usually a man. But women, too, frequently lash out, as anyone who reads, well, anything online knows. So, immersed in the world of Etsy, I kept waiting for an argument about Passover desserts or a comment from an adherent of the BDS movement about boycotting Israeli shops. But it never happened.

Perhaps any Etsy-related negativity goes straight to Regretsy. I haven’t fully explored the site’s “Jews” category, though I can tell it sometimes gets complicated. But even there, commenters seem to reserve their snark for the bizarre objects themselves, rather than anyone’s culture, religion or nationality. The owner of Regretsy claims to rarely moderate comments, and the closest to a Jewish disagreement I saw there consisted of a brief interchange on a post about a SpongeBob kippah. Maybe it’s just more fun to mock hideous Jewish guitar pick earrings than get into a heated debate.

In the end, the true reason for the lack of vituperation towards or between Jews on Etsy’s blog eludes me. But it throws into sharp relief how prevalent the phenomenon is everywhere else, and how infrequently I find a corner of the web that feels “safe.” I’m now 190 pages into the blog (I warned you, it’s addictive!) Maybe if I keep reading I’ll spot some Jewish-inspired rage there or elsewhere on the website. I hope not. Because safety, like uplifting posts about crafters whose small-business success enabled them to quit their day jobs, can be really nice.