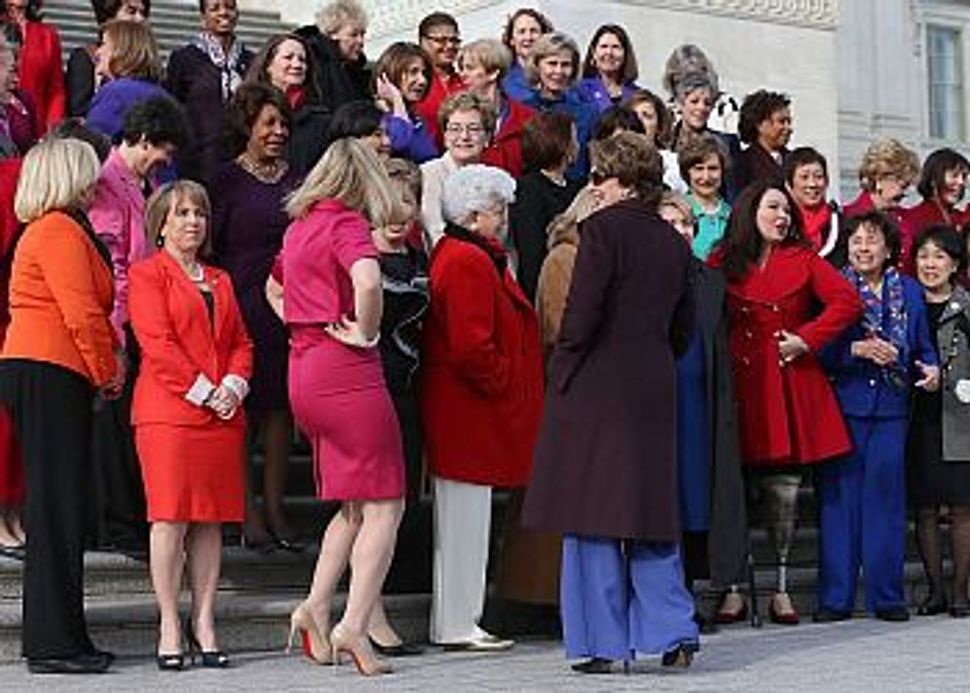 Democratic Leader Pelosi stands with the Democratic women of the House. Will one of them help see VAWA through? Image by Getty Images

As mass protests denouncing rape in India drew worldwide attention and a sexual assault case divided the small town of Steubenville, Ohio, the House of Representatives failed to re-authorize the 18-year-old Violence Against Women Act (VAWA) before the 112th Congress adjourned January 3.

Though VAWA historically enjoys bi-partisan support, House Republicans objected to new protections in the Senate version of the bill for Native American women, LGBT individuals and undocumented immigrants. President Obama pledged to veto the House version if it landed on his desk, saying it would roll back existing law.

Advocates, including leading Jewish organizations, are now calling for the legislation, which has funded over $4 billion in grants, to be swiftly re-authorized by the 113th Congress.

Congress’s failure to re-authorize the law in the current fiscal environment “sends a bad message to community leaders in local programs that are serving victims of violence,” Miri Cypers, Senior Policy and Advocacy Specialist at Jewish Women International, told the Sisterhood. “We’re already seeing funding being threatened and budgets are tighter.”

In a 2011 Jewish Women International survey of Jewish organizations working on domestic violence issues, nearly half of the respondents said their funding had decreased since 2010.

Ninety percent of respondents also said they believe their community faces a gap in services, especially legal services and affordable housing for victims of domestic violence.

VAWA funds could help bridge the gap, but so far, few Jewish organizations are tapping into these federal dollars. Half of JWI’s survey respondents said they did not know they were eligible for federal funds, and many organizations don’t have the resources or capacity to apply, Cypers said.

While domestic abuse occurs in the Jewish community at about the same rate as in the general population — 15% — Jewish women tend to stay in abusive relationships two to three times longer than women in the general U.S. population, according to the Jewish Coalition Against Domestic Abuse. The mitzvah of Shalom Bayit, to keep “peace in the home,” and the shame associated with the perception that “Jews are not supposed to be victims of abuse,” are some of the cultural issues facing Jewish women, the organization’s web site says.

With the 113th Congress now in office, the Jewish community will continue to advocate for VAWA’s re-authorization and funding. “There are over 150 large and small Jewish domestic violence organizations working throughout the country and they are all busy serving clients and doing educational and prevention programming, which says to us that domestic violence is widespread and exists in every community,” Cypers told the Sisterhood by e-mail.

As Senator Patrick Leahy tweeted in support of VAWA last June, “a victim is a victim is a victim,” whether she (or he) lives in India, Israel or Ohio. In any culture, coming forward for justice and support after rape or domestic abuse is a challenge. Perhaps it’s one the record number of women in the new Congress will make a little less daunting.