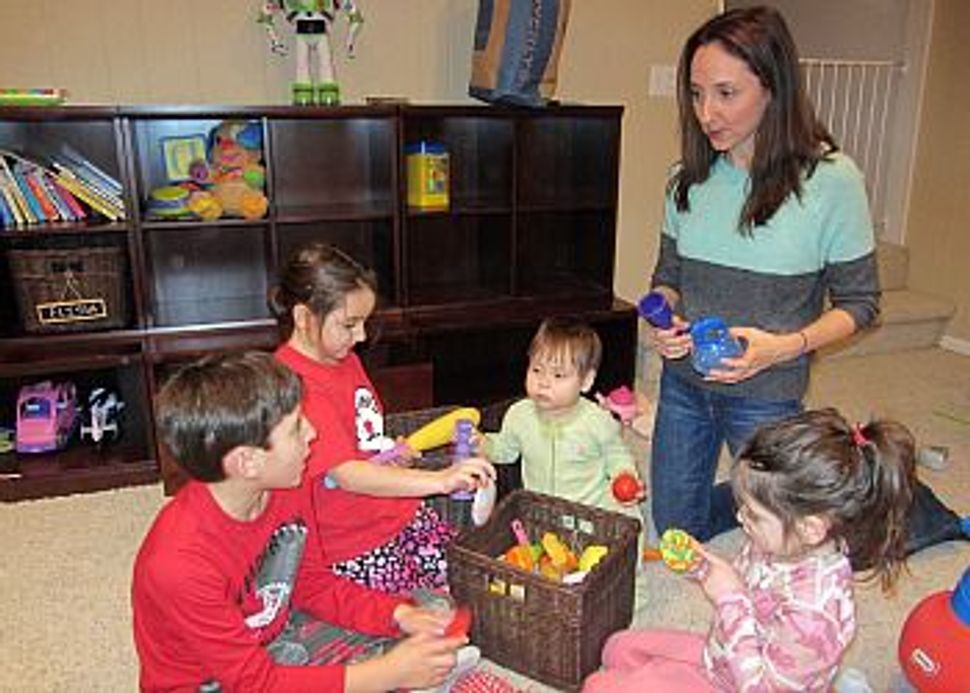 Nina Badzin helps her kids whittle down their toys. Image by Nina Badzin

We parents believe, at first, that we’ll keep the number of toys in our homes manageable. That we won’t become one of those families with plastic toys constantly piling up underfoot. We imagine that our kids will play school and house; that they’ll throw a ball around when friends come over. We imagine that once they’re old enough, the kids will simply “play.”

How’s that working out for most of you? I’m guessing that I might have some soldiers ready to enlist in my war on toys — what my husband I have started calling The 10 Toy Plan, which we plan to downgrade to a Five Toy Plan by the summer. At first the idea sounded impossible, until I considered the facts in my home (and yours).

THE TOYS ARE EVERYWHERE, RIGHT?

You intend to keep the toys in the house manageable, but I can name four things that account for the end of that particular promise: your child’s first birthday; your child’s first Hanukkah; your child’s tendency to leave toys anywhere, and the arrival of another child. Before you know it, you’re purchasing entire pieces of furniture to keep the toys in order. You need big baskets to hold the unwieldy items and small baskets to keep tiny items together. (Can we all agree that Polly Pockets are manufactured in Hades?)

Nobody’s four-year-old is keeping the Legos in the “building corner” and the markers in the art station. I, for example, have four children ages eight and under, yet my house is not particularly out of control on account of their toys. After all, how messy could the house be when I’m constantly reorganizing after the kids have put everything away in the wrong place?

If the amount of toys that your children own is such that they cannot keep some semblance of order without your help, I’d argue the kids own too much.

Loosen up! you might say to me. Let the faux sushi get separated into three different rooms. Let the 10-piece pots and pans set get sprinkled around the house. To that I say No! You’re missing the point. As it happens, pretend sushi and uber-realistic cookware constitutes another disturbing layer of the problem with toys.

I’m not here to wage a war against fun, mayhem and creativity. In fact, I’d like to see all of those tenets of play come back to our kids’ lives. But have you seen what it takes to play restaurant these days? There are little wood pieces representing all the possible toppings for tacos. Ice cream sundaes with sprinkle shakers and bananas you can slice with a special knife. How about playing house? You think kids have one baby doll and the rest is up to imagination? Maybe the couch becomes the crib? The ottoman is the baby’s bath? No way. There are pretend car seats, double strollers, bouncy seats, cribs, high chairs, baths, changing tables, and swings.

OUR KIDS ARE NOT RESOURCEFUL

At what point did we let ourselves believe that kids need so many props? Yes, there is value to pretend play and role-playing, but do kids need several baskets of fake food and a ringing cash register with coins and bills simply to play grocery store? The toys have become about imitation over imagination. Why can’t the blocks also stand in for the cupcakes? It’s as if we don’t trust our children to come up with certain concepts themselves. We’ve allowed them to believe that any game of pretend requires miniature versions of real-life products.

In the end, the joke is on us. We hope all of these toys will keep our kids happy and busy; if they have so much cool stuff, they’ll find something to do, right? Wrong. Raise your hand if your child has ever used the expression “I’m bored.”

According to John Rosemond, a psychologist and the author of the book “A Family of Value,” most parents start with good intentions to give kids as many opportunities as possible, but in reality parents squash kids’ imaginations. Children have “lost touch with what [he calls] the ‘magical make-do of childhood’ — the ability to improvise, create, do a lot with a little.” This is why a child with a playroom bursting with fabulous toys can utter the dreaded statement, “There’s nothing to do.”

In “A Family of Value,” Rosemond promises that limiting kids’ toy selection to five toys per child will encourage independent play and teach kids to make do with less.

There are no exact rules, only common sense. A Lincoln Log set would count as a toy. Perhaps a doll and a stroller would count as another toy (but not four dolls + eight outfit changes + 11 bottles.) A basket of pretend food would be another toy, meaning, the other three baskets of food go into a closet or get donated. My husband and I started with 10 toys per child, but we’ll move to five as soon as possible.

When we asked our kids to pick 10 toys they’d like to keep for now while the rest goes in storage or is donated to children in need, they completed the exercise with no complaints. They honestly do not play with most of what they own. Our kids, it seems, don’t think they need all this “stuff.” I wonder if more often than not it’s the parents, not the children, who have lost touch with the concept of making do with less.