Best Honeymoon Ever, Sea Urchins and All 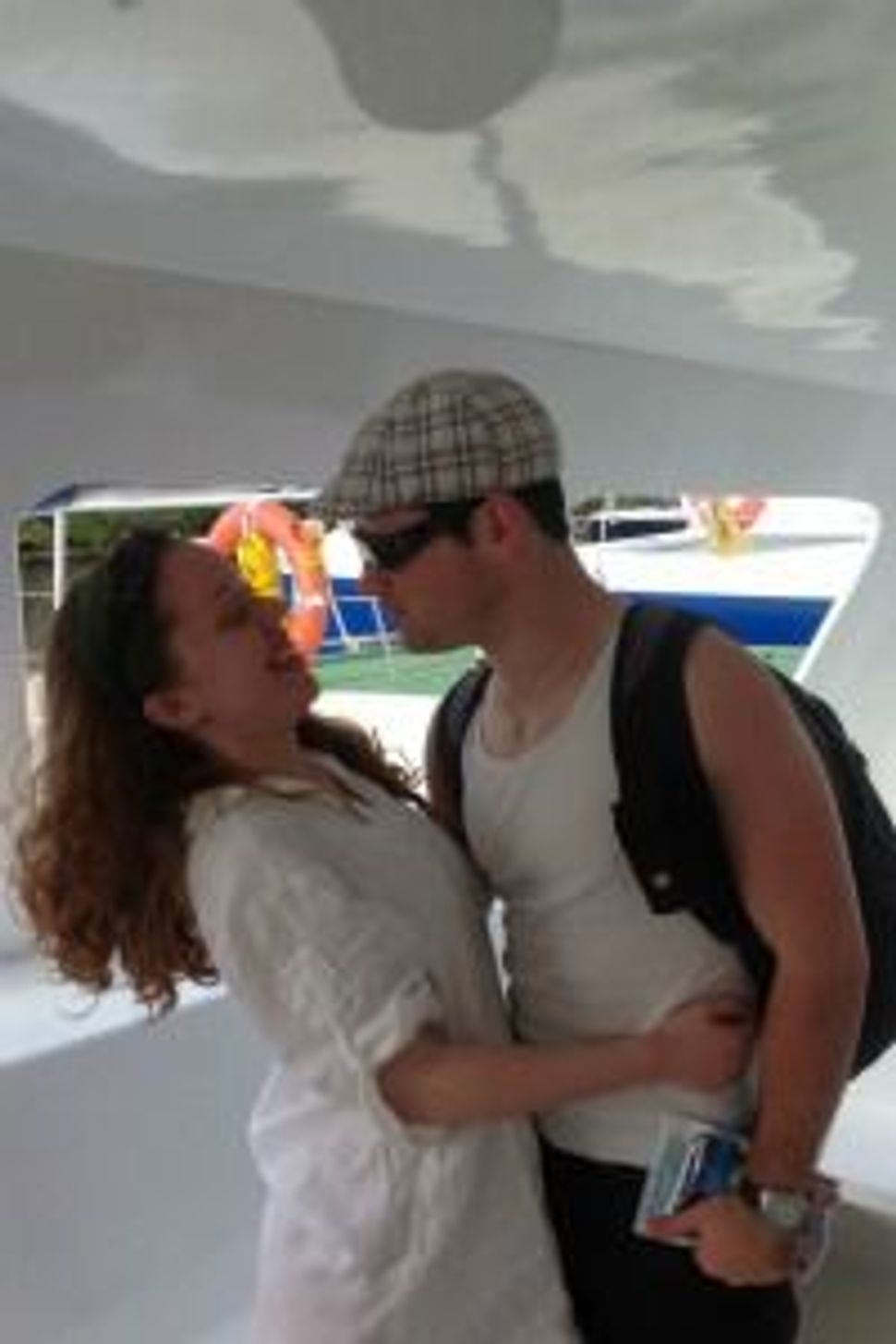 Over the Moon: Simi and Jeremy vacation in St. Lucia.

On the way back from our honeymoon, Jeremy’s back was hurting so much that I carried his backpack — much to his chagrin (he’s chivalrous) — and I had nine sea urchin spines embedded in my left foot from a minor altercation with the Caribbean coral reef. But when our parents sympathized at how our honeymoon must have been affected by these physical ailments, we were baffled. It simply hadn’t occurred to us to let silly things like pain and immobility get in the way of our good time.

Jeremy and I decided to go to St. Lucia for our honeymoon, more because of the sunny weather and a LivingSocial deal we’d found than anything else. It turns out the Jewish bargain gods had pointed us in the right direction, because St. Lucia was an island paradise beyond our expectations, where everyone is happy all the time — and it’s easy to see why. The resort we stayed at was all-inclusive. (Of course, as kosher-observant Jews, the delicious-smelling free food was there just to tempt us. We trekked back to our room twice daily for a meal of bread and vacuum-packed deli.) We spent a large part of our honeymoon sitting next to the pool or beach and reading, occasionally making use of the water to cool ourselves us from the sun. The rest of the time we enjoyed water sports, took a day sailing trip around the island, and, of course, slept a whole lot. As weeks go, it was not a bad way to spend one.

For better or worse — one could argue either way — our honeymoon, like most Orthodox honeymoons, was not immediately after the wedding. Instead of the hopping in a car right after the wedding and rushing off to the honeymoon, we Orthodox Jews like to do a little thing called killing the fun. For a week after the wedding, we spend every night having dinner with a different group of people, many of whom we don’t know.

The Orthodox call this weeklong celebration Sheva Brachot, and it’s designed mainly, I gather, to exhaust the couple so much that they don’t even want to have sex that first week, which, did I mention, we can’t have anyway. (That’s right: after the marriage is consummated, Orthodox Jews enter a state of ritual impurity, in which the couple is not allowed to touch again for a number of days.) So a honeymoon right after the wedding would be pretty lame even without Sheva Brachot.

But honeymoon we eventually did. Like many things concerning marriage, no one told us this time is often incredibly anxiety-provoking for many couples. Luckily for us, we experienced the exact opposite. For an entire week, Jeremy and I were in a state of utter bliss and relaxation. We didn’t fight once. We were simply happy. Sunstroke in the dead of winter will do that to you.

That’s not to say things didn’t go wrong. Like I said, I stepped on a sea urchin one day. Not knowing anything about sea urchins, being as we live in New Jersey and our main association with water is driving over it to get to New York, we decided to go to the local clinic to see what needed to be done. And if you’ve never stepped on a sea urchin before — it’s a rite of passage in St. Lucia, apparently — let me tell you: it hurts. A lot. So there I was, drenched from head to foot and whimpering and weeping in pain in the middle of our tropical paradise resort while Jeremy ran from one room to another, arranging for a taxi and getting our wallets. The clinic itself was entirely underwhelming, exceptional only because of the wait time (3 hours before we saw the doctor). She took a look at my foot and told me to wait for the spines to come out, then sent us on our way.

I felt horrible for ruining our afternoon and taking up hours for nothing. I spent a great deal of time apologizing to Jeremy for making him sit with me in the waiting room for ours as our bathing suits slowly soaked our clothing, and he spent the same amount of time telling me I was silly to apologize; he was happy to help, and he was sorry that I got hurt. It wasn’t a fun way to spend the afternoon, but Jeremy’s complete devotion to me made it a sweet one. We spent the evening recuperating in front of whatever television show I wanted to watch.

Two days later, Jeremy woke up with back pain that only intensified as time passed. In return for his attentiveness to me in my pain, I was able to take care of the packing for both of us and carry as much as he would let me. (I love him dearly, but he’s not immune to silly male pride.) And we had fun anyway — we went jet skiing (not a good idea for his back, as it turned out) and got massages to make up for the jet skiing. Our injuries got in the way, but they didn’t stop us from enjoying ourselves.

When I look back on our honeymoon, I’ll probably forget that we ever endured any sort of pain that week. The theme of the week was happiness and enjoyment, and if I remember our injuries at all, it will only be to appreciate how much we were able to take a potentially disappointing turn of events and turn it into kindness and selflessness.

Best Honeymoon Ever, Sea Urchins and All