Controversial Suspension For Contestant On Israel’s ‘The Voice’ 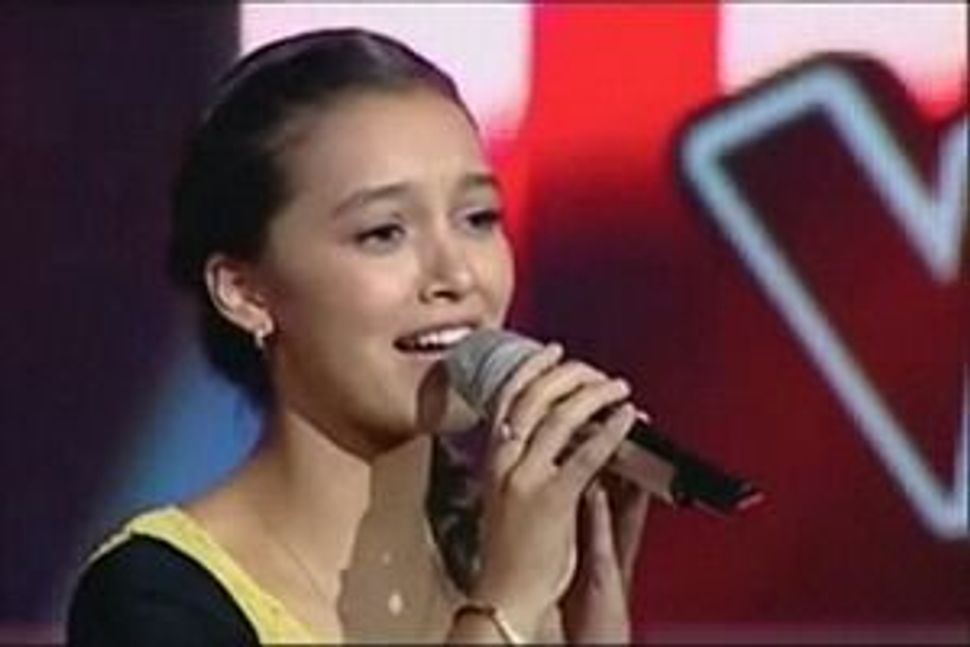 We like to encourage young people to develop their natural talents and follow their dreams. Just look how far the preternaturally talented 13-year-old diva Carly Rose Sonenclar got on the “The X Factor” with the support of her family and community (not to mention millions of American television viewers).

But that’s not necessarily how things work in some sectors of Israeli society. Ophir Ben-Shetreet, a 17-year-old with a voice as outstanding as Sonenclar’s (at least to my untrained ear) is a leading competitor on Israel’s version of “The Voice.” One would think that she would be rewarded for her confidence, effort and talent. Sadly, that is not the case.

Ben-Shetreet is essentially being punished for having an exceptionally beautiful voice and wanting to share it with the world. The 12th grader has been suspended (with the agreement of her parents) for two weeks from her religious girls’ high school in the seaside city of Ashdod. Her offense? Singing in public.

As we know from news coming out of Israel in the past few years, enforcing kol isha, the prohibition against a woman’s singing in public (particularly in front of men), seems to be a top priority of the religious establishment.

In this case, the complaints against Ben-Shetreet’s singing on the popular TV show came from the parents of other students in her school. Ben-Shetreet’s suspension and required attendance at special Jewish law classes is supposedly meant to serve as a deterrent to her classmates — should they, heaven forbid, want to exercise their God-given vocal talent or just plain have some musical fun while within hearing earshot of a man.

Dressed modestly in a yellow and black dress knee-length dress with elbow-length sleeves, Ben-Shetreet blew the judges away with her incredible voice. They called it clear, clean, pure and angelic, and proceeded to fight for the opportunity to be her mentor during the competition. She ended up somewhat unexpectedly choosing rock star Aviv Geffen.

Back at home at Nir Galim, a religious moshav near Ashdod, many in the community are reportedly fully behind Ben-Shetreet. On the other hand, Rabbi Zvi Arnon, the moshav’s rabbi, said he was understanding of Ben-Shetreet’s situation and praised her for being “a girl with strong morals,” but he reiterated the Halakhic prohibition against her singing. “There is not a single rabbi who will permit a woman to sing in front of men, especially on television. It is simply not permissible by Jewish law,” he said in an interview with Channel 7.

In terms of the punitive action taken by Ben-Shetreet’s school, the rabbi basically said the school, which deals with hundreds of girls and their families, had to do what it had to do.

But is that really the case? Could the school have handled the situation differently and avoided singling out Ben-Shetreet? At the very least, the Jewish educators running the school must know that the Talmud teaches, “One who shames his neighbor will have no place in the World to Come.” Rabbi Arnon himself hinted that the school’s approach wasn’t optimal. “In my opinion, we don’t have to wage a war on this issue, we just have to give our opinions as rabbis” he said. “We need to try to bring everyone closer [to the faith]. We don’t excommunicate and we don’t punish.”

As infuriating as it is for me to learn of yet another case of kol isha-based discrimination against women, I am buoyed by the fact that it doesn’t sound like Ben-Shetreet is going to cave to pressure from the religious authorities. She knows she’s talented. Even better, she’s determined, and has shown that she can think and choose for herself.

“I have loved to sing since the time I was very young. I’m looking for a place to realize my talent,” she said on the show. “I think the Torah wants us to be happy, it wants music to make people happy. I think you can integrate the two, and because of that, I made the decision to come on to the show.”

This young woman is clearly going to go far — and I don’t just mean on “The Voice.”

Controversial Suspension For Contestant On Israel’s ‘The Voice’