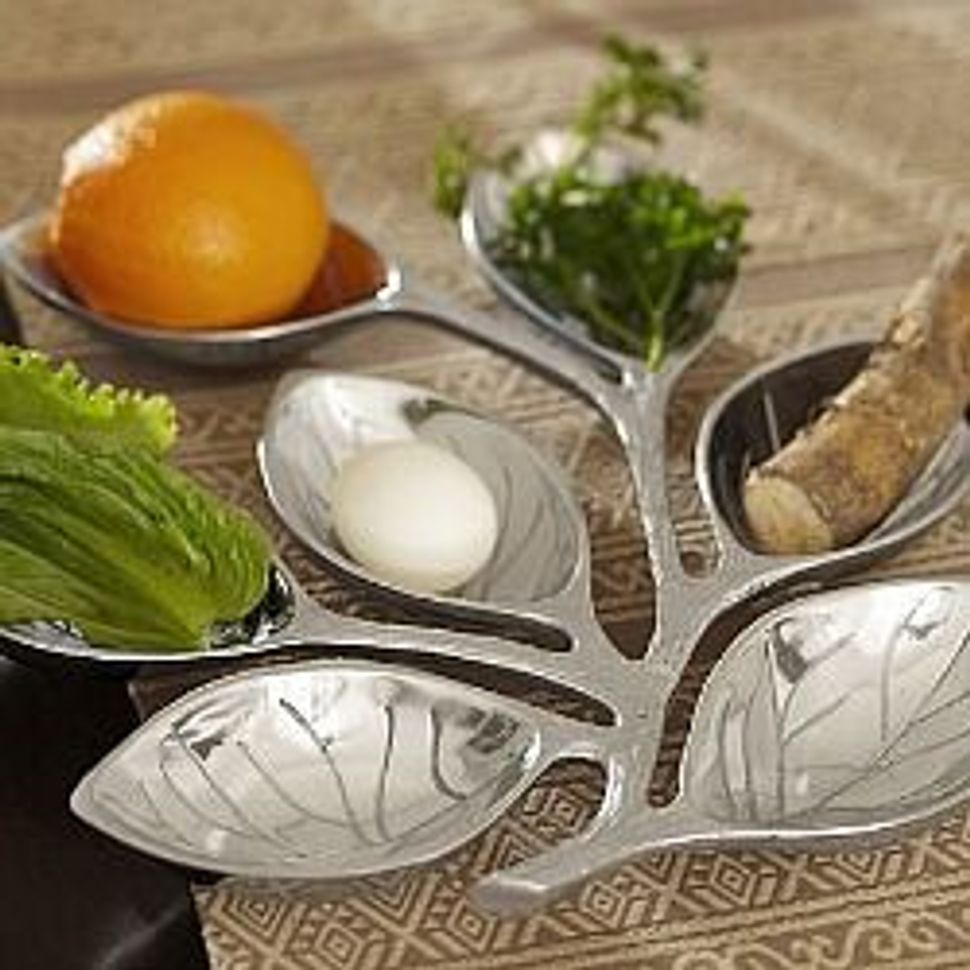 If ever there was proof positive that a once-marginal feminist Jewish ritual is now mainstream, this is it: The latest Pottery Barn catalog touts a new seder plate — holding an orange.

The modern, leaf-themed Passover tabletop accouterment has seven compartments. In addition to spaces for the ritual re-telling’s traditional symbols, there’s a leaf meant to hold an orange, which is also featured in the catalog photo.

Including an orange on the seder plate dates back to the early 1980s, according to the innovation’s creator, Susannah Heschel, a Jewish studies professor at Dartmouth and the daughter of famed Rabbi Abraham Joshua Heschel.

As she relates, adding an orange grew out of her experience visiting Oberlin College, where she encountered a student-written feminist hagaddah. That hagaddah suggested putting a crust of bread — prohibited, of course, during the chametz-free festival — to express solidarity with lesbians and gay men after a rebbetzin had said, “There’s as much room for a lesbian in Judaism as there is for a crust of bread on the seder plate.” Heschel decided, the following year, to put an orange on her family’s seder plate.

She did it “as a gesture of solidarity with Jewish lesbians and gay men, and others who are marginalized within the Jewish community,” she wrote in an email to Rabbi Andrew Sacks, who is the director of the Conservative movement’s Rabbinical Assembly in Israel.

“Bread on the Seder plate brings an end to Pesach — it renders everything chametz,” she explains. “And it suggests that being lesbian is being transgressive, violating Judaism. I felt that an orange was suggestive of something else: the fruitfulness for all Jews when lesbians and gay men are contributing and active members of Jewish life.”

She notes, somewhat ruefully, that in its telling and re-telling, her story has transformed into a different tale.

The typical patriarchal maneuver occurred: My idea of an orange and my intention of affirming lesbians and gay men were transformed. Now the story circulates that a man said to me that a woman belongs on the bimah as an orange on the Seder plate.

A woman’s words are attributed to a man, and the affirmation of lesbians and gay men is simply erased. Isn’t that precisely what’s happened over the centuries to women’s ideas? And isn’t this precisely the erasure of their existence that gay and lesbian Jews continue to endure, to this day?

I’m all for adapting Jewish rituals to contemporary perspectives. My personal Passover favorite is the Miriam’s Cup, which references both a woman’s pivotal role in the survival of the Jewish people and God’s blessing of water.

Perhaps next year we’ll see Pottery Barn feature a Jonathan Adler-esque Miriam’s Cup. Or, for Purim, even an Esther-Vashti flag.

Now that would be amazing. Actually, having a feminist seder plate for sale at Pottery Barn? Dayenu.