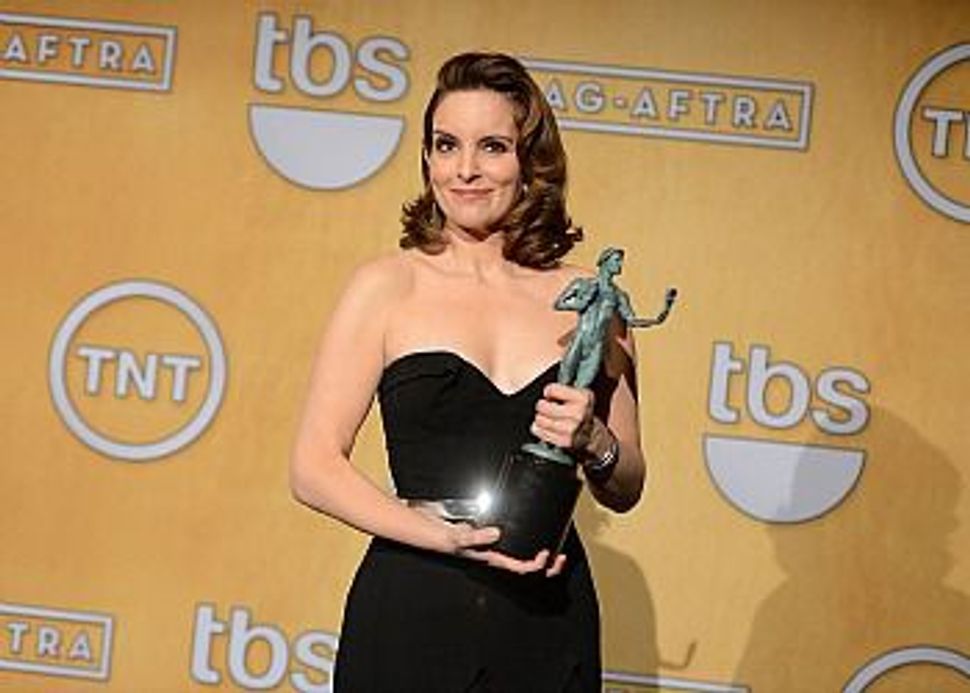 Tina Fey accepts a Screen Actors Guild Award for Outstanding Performance by a Female Actor in a Comedy Series. Image by Getty Images

After seven seasons, “30 Rock” ends tonight on NBC. During its tenure, the show dropped Jewish references like mad, ranging from a crack about Monica Lewinsky joining JDate to contract negotiations that include “a 15% raise, a two-pic guarantee from Universal and time off for every Jewish holiday, no matter how ridiculous.” And of course, a Werewolf Bar Mitzvah.

But as a woman of a certain age, I always found myself drawn to the thoroughly modern and heroic character of Liz Lemon — and, because I have what some might consider entirely too much Jewish education, when I look at Liz, I can’t help but think of the concept of an “Eshet Chayil” or woman of valor, as described in the Hebrew poem of the same name.

I have always felt challenged by the “Eshet Chayil” poem, which was originally penned by King Solomon and which continues to be read in traditional homes by husbands to their wives before Shabbat dinner in praise for their good works. As a single woman, the references to a husband (“Her husband is known at the gates, when he sits among the elders of the land”) don’t define me. I don’t have children (“her children rise and praise her”), and I’ve never crafted and sold my own clothing (“she makes a cloak and sells it, and she delivers aprons to the merchant”). The tropes of what makes a valorous woman in Solomonic times, do not resonate with me today. I faced two obvious choices — abandon the poem, or reinterpret three non-consecutive quotes through a more contemporary, Liz Lemon lens. And so without further ado…

“An accomplished woman, who can find? Her value is far beyond pearls. Her husband’s heart relies on her and he shall lack no fortune.”

While “chayil” is generally translated as “valor,” or in certain translations as “accomplished,” the root also reflects military prowess. If ever a general there was in television, it is General Liz Lemon who oversees a dysfunctional writers’ room at TGS (a show originally called “The Girlie Show,” but rebranded as “TGS with Tracy Jordan”), battles her success-driven commander-in-chief for jurisdiction and control over her charges, and politically navigates petulant and self-centered stars.

Liz has achieved what few women in the real television field, let alone in the fictional television field, have accomplished. In an industry where much of the glamour, attention and money goes to the shiny pearls at TGS — the insufferable celebrity co-headliners Jenna and Tracy — Liz is both the heart and the smarts of the show. She is passionate about her work (“she works with her hands willingly”), and as the head writer, she has her hands in everything. Without her, the show descends into drivel, and the one person who knows this better than anyone is the only consistent male figure in Liz’s life — her boss and “work husband,” Jack Donaghy.

In addition to mercilessly teasing her — which, let’s be honest, makes him more like her older brother/antagonist boss than a lover/nepotist boss — Jack constantly meddles in her love life because he knows her value, both in the world and to him. While the consummate opportunist in him sees her value to his network and wants to eke every molecule of energy from her in service of capitalism and success, Jack’s heart is more altruistic and holds a deeper friendship that motivates his meddling precisely because he knows that Liz, for all her oddities and quirks, is worth more than she gives herself credit for.

“Strength and honor are her clothing, she smiles at the future…. Charm is deceptive and beauty is vain.”

Liz has a unique sense of style: modest, nonchalant and barely put together. But it doesn’t matter. Sometimes glasses, a ponytail, a flannel button-down and jeans do the job of keeping your body covered and warm, but ultimately the fabric that both protects and defines her is the strength of her character. And it’s that strength that gives her the inner conviction to achieve what she sets her mind to, from producing a show with extremely difficult personalities to going after the family she knows she wants. During the penultimate episode of the show, Liz finds herself the adoptive mother of “twins” who are meant to evoke Jenna and Tracy; seeing them for the first time, her hesitations are replaced by the knowledge that she’s managing the actors every day on the job at TGS was the perfect training for motherhood.

“Her children rise and praise her, her husband lauds her. Many women have done worthily, but you surpass them all.”

Since I haven’t seen the final episode yet, I don’t know if Liz’s literal or showbiz-figurative children will “rise and praise her,” or if her real or work husband “will laud her.” But for the first time, it’s looking like life is going Liz Lemon’s way. She’s got love, plus the family she’s always wanted. TGS’s future hangs in the balance for one more episode, but because it’s the last episode, we know that there will be some sort of closure. And those of us who have been with her on this journey are happy for her too, because we relate to her flaws and foibles, much more so than to some image of Solomonic-era perfection. She’s a woman of valor in primetime, a weekly visitor in our homes who reminds us that life can give you lemons, but it also gives you Liz Lemon. And if Liz Lemon can do it, we feel like maybe we can too.

Esther D. Kustanowitz lives in Los Angeles. You can read more of her writing, including an exclusive excerpt from her unfinished “30 Rock” spec script, at http://myurbankvetch.com.