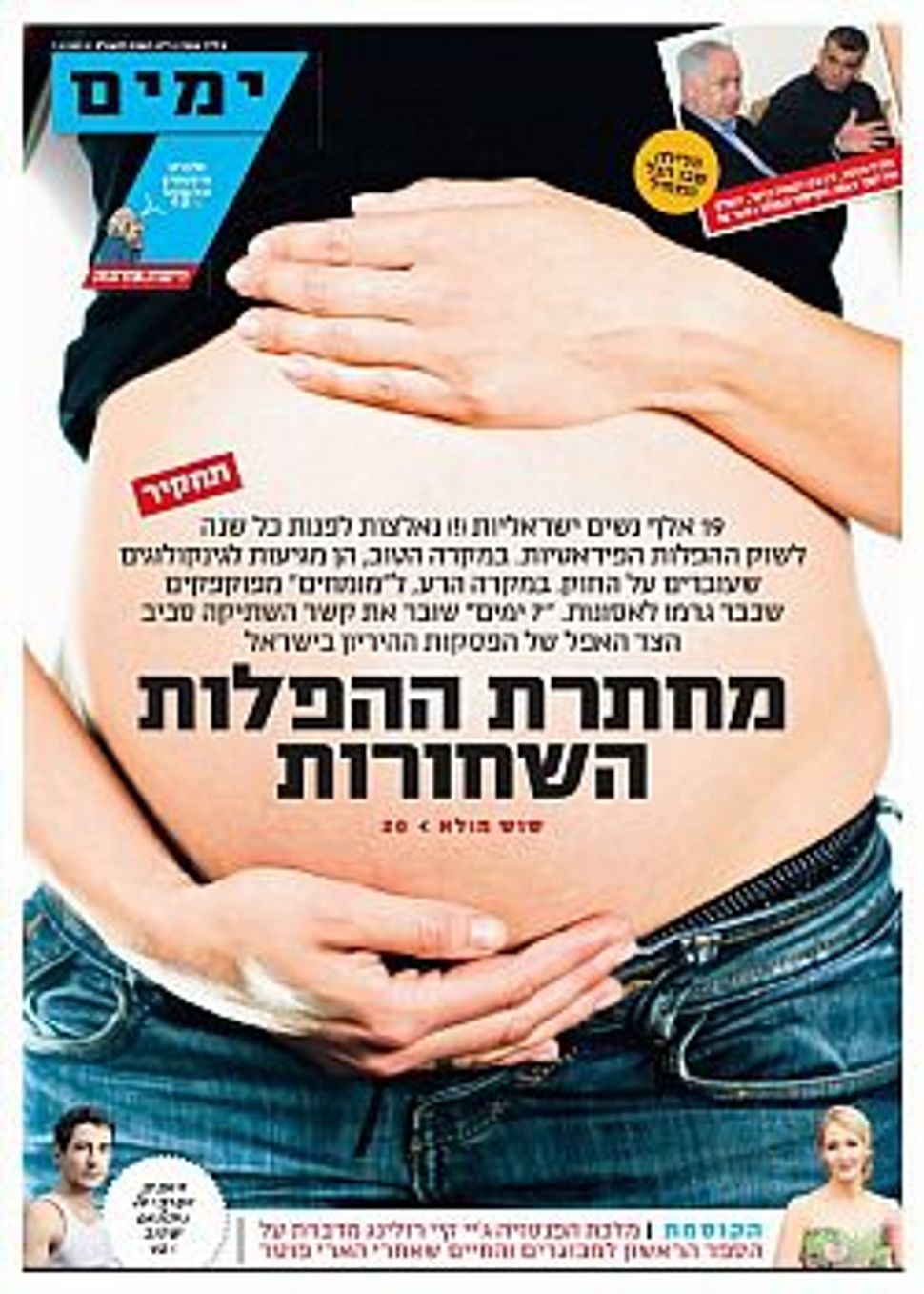 Abortion has been legal in Israel since 1977. However, that does not mean that all abortions there are done according to the law.

An article published last year, co-authored by Sisterhood contributor and new JOFA executive director Elana Maryles Sztokman, states that no one knows exactly how many illegal abortions take place in Israel. However, according to a new investigation by Shosh Mula in Israel’s Yediot Ahronoth newspaper (published in the paper’s “7 Yamim” (7 Days) weekend supplement, which is not yet available online), it is possible to determine how many there are — and it is hard not to be shocked by the number.

According to Mula’s article, there are approximately 19,000 illegal abortions (of various kinds and in various settings) per year performed in Israel — the same number as legal abortions. The statistics were taken from a recent survey commissioned by New Family, the leading family rights organization in Israel that focuses on everything from gay rights and surrogacy law to fertility law and civil marriage.

With half of all abortions taking place below Israel’s official radar, a huge black market has developed. “A thousand shekels in [West Bank Palestinian town] Qalqilya, 5,000 shekels in a fancy clinic in Tel Aviv, or 500 shekels with a knitting needle in Jaffa: Welcome to Israel’s wild and reckless abortion black market,” the article begins. We’re talking about an underground economy of NIS 80 million ($22 million) per year.

All Israeli women seeking an abortion in Israel must seek approval from an abortion panel (made up of a social worker and two doctors—one of whom must be a woman) at a government-supervised hospital. If approved, the procedure, whether pharmacological or surgical, must take place in one of these hospitals in order to be considered legal.

So, if for instance, you are a happily married, healthy 34-year old woman with the three children you wanted and feel you can successfully parent, and you find yourself unexpectedly pregnant with a healthy fetus, there is little chance your request for an abortion will be approved.

Mula explores the reasons women opt to go the illegal route, whether it be to have the procedure done at a private doctor’s office by one of many willing and qualified physicians (who are acting illegally and face five years in jail, since all abortions must take place in government-supervised hospitals), or to undergo a dangerous back-alley abortion.

Many women who do not meet the law’s criteria do not want to put themselves into the position of lying to an abortion panel, especially when those lies could come back to haunt them. For example, a woman who makes up a story that the pregnancy resulted from an extra-marital affair could end up with her husband using that fabrication (which she has officially signed off on) against her in any future divorce proceedings.

The article quotes a Health Ministry official who says that the vast majority of the requests for abortions heard by the abortion panels are approved. But for some women, the abortion-related out-of-pocket expenses (around $750) are unmanageable. Others, who have no financial constraints, still choose to go the illegal route, no matter what the expense. For some, it’s a matter of not wanting their husband or boyfriend to know. For others, it’s simply a matter of wanting to have control over their own bodies and lives.

Mula quotes a Health Ministry spokesperson as saying, “In the last five years, no complaints have been filed against doctors in the matter of performing illegal abortions. This would be a criminal offense that would be investigated by Israel’s Police.”

MK Zehava Galon, leader of the Meretz party, introduced a bill in 2006 to revoke the 1977 abortion law. It aimed to “create a new discourse around pregnancy and abortion that is not about motherhood but rather about equality and women’s rights to control their bodies and their fertility.” The bill failed to pass.

In the meantime, the abortion black market is booming thanks to a “don’t ask, don’t tell” approach, and all Israeli women are paying the price.