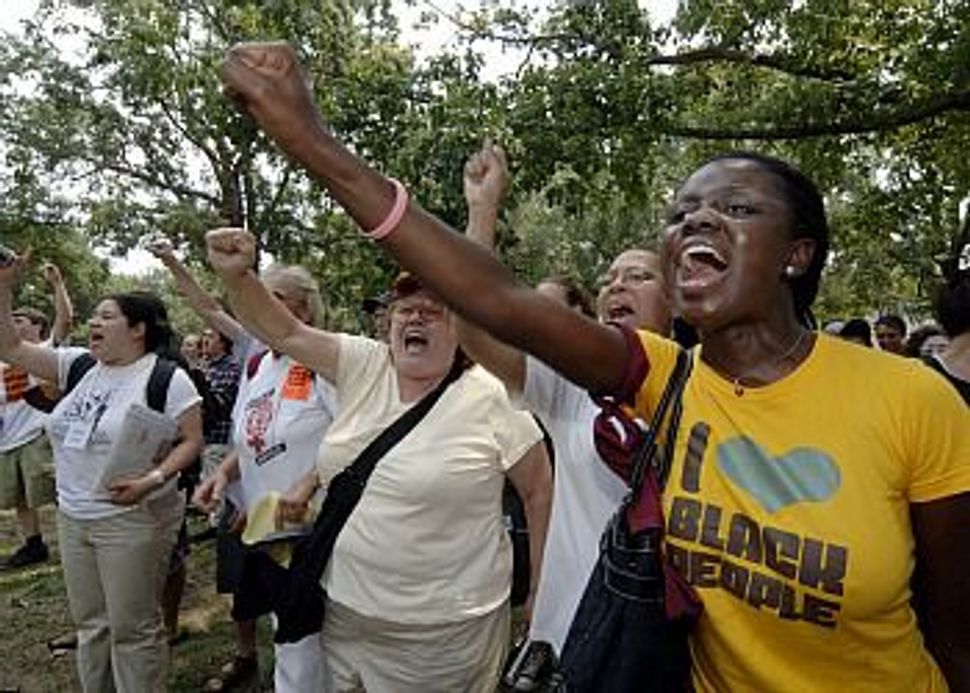 Protesters fought against closing the only abortion clinic in Mississippi. Image by Getty Images

Still, the landscape depicted in the film was achingly familiar. My mother’s family has lived in Alabama since the 1860s and she grew up in a tight-knit Jewish community in Birmingham. My parents were married in Birmingham and my sister and I were born there; even though we moved north when I was very young, our deep roots and frequent visits combined to make me feel more comfortable in the South than anywhere else.

As JWHO fights to stay open, I’ve thought about “The Last Abortion Clinic” frequently over the past year. Governor Phil Bryant has made no secret of his desire to close the clinic, and thanks to a new law requiring the clinic’s physicians to have admitting privileges at local hospitals, he may get his way. The physicians, all of whom are licensed, have applied for privileges at seven local hospitals but have been turned down by all of them. The reason? It seems that the hospitals feel that granting them admitting privileges would be disruptive to its “function and business” in the community.

One in three women in this country will have an abortion by the time they are 45 years old. I’m willing to bet that few of them ever planned to terminate a pregnancy. But it is the very fact that economic hardship, serious health problems, or severe fetal abnormalities do occur — not to mention all of the other reasons that women choose abortion — that makes what is happening in Mississippi so important.

While it is tempting to say that this situation is unique to a state known for conservative politics and culture, the reality is that anti-choice activists all over the country have made great inroads in restricting access to abortion. In both 2011 and 2012, states from Kansas to Wisconsin to Virginia enacted a record number of laws, addressing everything from the physical clinic building to mandatory ultrasounds, with the net effect of making abortion more difficult and expensive for women to obtain.

The rationale for many of these laws is that they protect a woman’s health. Yet it is difficult to see how making abortion more costly and time-consuming is in the best interest of a woman. It’s even more difficult to see how forcing the women of Mississippi to travel to Georgia, Alabama or Tennessee to have an abortion will benefit their health and well being. If the Jackson Women’s Health Organization closes, this kind of travel could very well become the reality for hundreds of women. And if my home state of Michigan is successful in pushing through its own onerous restrictions, then women could have to travel to Wisconsin or Illinois to access abortion services. If certain anti-choice politicians in Congress have their way, then women in my current home of Washington, D.C., could lose the ability to terminate a pregnancy after 20 weeks — or after medical tests are able to diagnose a wide range of serious fetal abnormalities.

But if any of those circumstances do occur, to me or my best friend, my sister or my daughter? I want to know that all the women, including myself, can make choices that are best for ourselves and our families. I want to know that even if we never need to access this particular medical service, we still live in a country that recognizes the importance of having these choices available and that respects its citizens’ abilities to make their own decisions.

I was born in Alabama. I grew up in Michigan. I live in Washington, D.C. But today, I am a Mississippi woman, and I am scared.