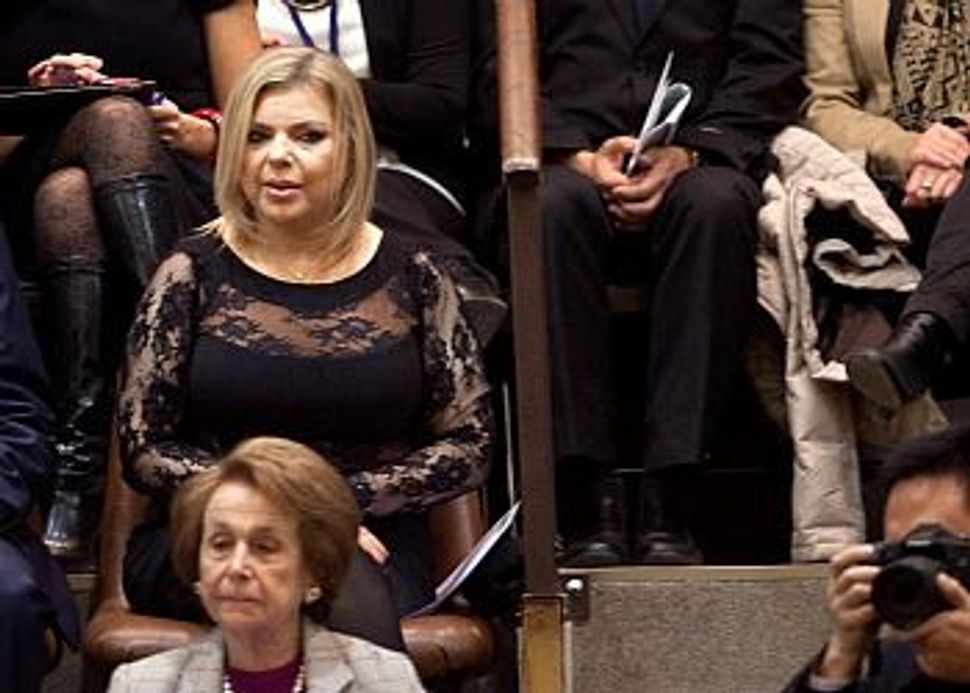 The induction of the new Knesset this week raised some crucial issues for women in Israeli society, but you’d never know it from following the news. The blogosphere was abuzz this week, but not with stories about the significant strides made by women — for example, the record number of women Knesset members and party leaders; the fact that the religious Zionist Habayit Hayehudi party, the only religious party with women on its list and gender issues in its platform, now holds a key position in coalition negotiations; or the fact that negotiations hinge in large part on demands for mandatory conscription of haredi men, a plan with serious implications for women in the status of women IDF. All of these issues may potentially affect women’s lives and status in Israel, but apparently they’re all, well, boring. The real news, apparently (even here at the Sisterhood) was what Prime Minister Bibi Netanyahu’s wife wore to the inauguration.

There are many good reasons why Sara Netanyahu’s dress should not be news. For one thing, she is not a lawmaker and therefore should not be the focus of the story. The news of the day should have been about 120 incoming legislators, 48 of whom are completely new to the institution and 27 of whom are women. It should have been about issues on the national agenda and the civic mission of the new Knesset, not on spouses’ clothing.

Second of all, if Sara Netanyahu had any relevance on the events of the day, it is related to her ideas and influence on the most powerful man in the country. It took Netanyahu several days after the elections to contact Naftali Bennet, the head of Habayit Hayehudi, reportedly because Sara doesn’t like him. If we want to discuss Sara’s role in the Israel, we should be talking about why she doesn’t want Bennet in the coalition, and how her taste in politicians — not her taste in clothing — will impact Israel’s government.

Finally, and most importantly, the discussion of Sara’s attire reduces our public discourse, especially about women, and drags us all into the gutter. This whole story is more of a reflection about us as a society than it is about Sara’s taste. What does it say about our values when, on the day when we are forming a new government that will impact every aspect of our civic lives, all we are interested in is the so-called fashion police? Consider how shallow it is to care more about style than substance as we empty our minds and completely undermine our lawmakers. After all, if we are asking them to represent us and then demonstrate an undying commitment to rubbish, how will our lawmakers interpret “the needs and interests of the people” when it comes to creating legislation on our behalf? One can only wonder. How can we ask them to take us seriously when we don’t take ourselves seriously?

Significantly, several lawmakers from different sides of the spectrum have commented on this media obsession. Likud’s Limor Livnat called it “sexist slander,” Shas MK Aryeh Deri said it’s “disgusting” and “not modest” (the media attention, not the dress!), and Meretz head Zehava Galon said that it’s “a product of chauvinistic norms that expect women to be aesthetically pleasing objects focused on appearance and not substance.”

Indeed, the relentless societal gaze on the female body is particularly obnoxious when it comes to women leaders. Let’s not forget what the media has had to say about the appearance of strong and important women leaders including Condoleezza Rice, Janet Reno, and Hillary Clinton. Name It Change It, which chronicles the constant sexist media coverage of women public figures, the incessant commentary about women’s legs, arms, chins, hair, faces, chests, and of course clothing choices, says, “When you attack one woman, you attack all women.” Indeed.

Comparing Sara Netanyahu to Michelle Obama belies the point. Whether the public expresses approval or disapproval of a first lady’s appearance — complaining when she doesn’t live up to our ideals and paying undue homage when they do — the conversation reduces first ladies to window dressing and reinforces the idea that men should be leaders and women should be eye candy.

This insufferable fixation with women’s appearances over ideas and actions is oppressive to all women everywhere, and we should be deeply offended by it and actively shun it. Rather than criticize Sara Netanyahu’s choices and values, we should take a long, hard look at our own.