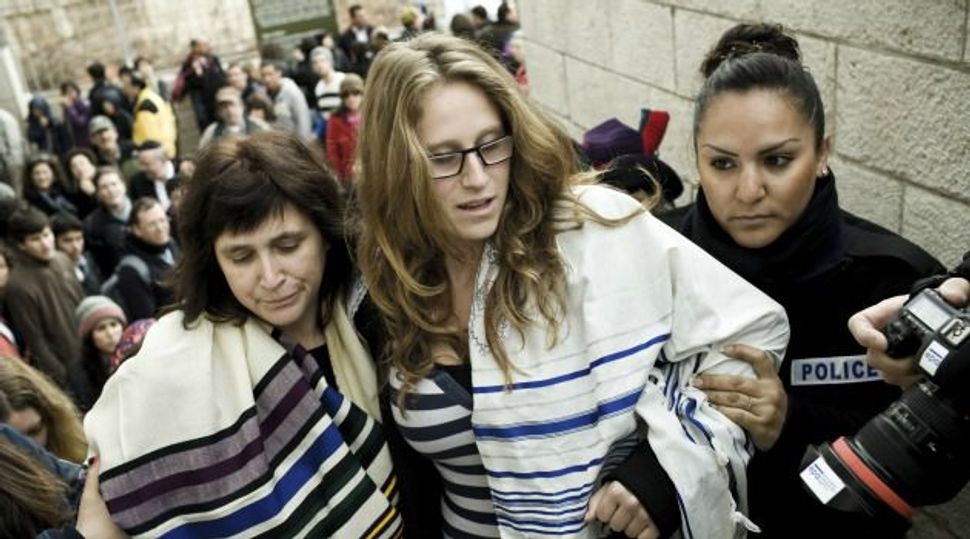 Susan SIlverman and her daughter, Hallel Abramowitz-Silverman, are arrested during Women of the Wall portest last week. Image by Wiki Commons

The teenager arrested on Rosh Chodesh Adar at the Western Wall for wearing a prayer shawl on Tuesday convinced Jerusalem police to withdraw their 15-day ban on her returning to the Kotel. She plans to go to the Kotel on Monday to chant from the Megillah with other members of Women of the Wall in celebration of Purim.

Hallel Abramowitz-Silverman, 17, who is comedian Sarah Silverman’s niece, went to the Kishle police station on Tuesday with her parents and a lawyer for Women of the Wall, bearing a letter requesting that she be able to retract her signature on the ban. Originally, she signed it as a condition of her release on Feb. 11, when she was arrested along with nine other women at the Kotel.

“I was nervous, and I didn’t realize [signing] it would mean missing Megillah reading,” she said in an interview with The Sisterhood. Being held at the police station that day “was a very hard couple of hours.”

The only reason she agreed to sign the statement to begin with was that her mother was leaving Israel on a trip later that day and they were afraid that she’d miss her flight if they did not.

Abramowitz-Silverman said she was surprised at how quickly police agreed to withdraw the statement. They were in and out of the police station in about 10 minutes, she said.

“They were scared not to” sign it, she said. “They gave in. We got it, we won. It’s amazing. It’s a sign of weakeness on their part. They’re getting scared, this is them showing that, and we’re going to keep fighting until we win this.”

Women of the Wall will be at the Kotel to celebrate Purim on Monday as they have for many years, said the organization’s spokeswoman, Shira Pruce. “Purim is such a happy day full of role reversals and opposites, a day of so much joy that we’ve never had any problem with police or the public at the Kotel and we hope that will still be the case,” she said. But “we’re aware of the fact that regulations change in the moments before Women of the Wall get to the Kotel, so we are prepared for that reality.”

Meanwhile, a hoax statement purporting to be from Israel’s Sephardic chief rabbi, Shlomo Amar, prohibiting women from chanting the Megillah in Israel circulated among journalists Tuesday. The chief rabbi’s spokesman, Ziv Maor, said “it is fraudulent” and that his office is investigating the source of the document, which is on the chief rabbi’s letterhead and worded in such a way that it appeared to be from him.

“Now we’re trying to check who has the interest to send such a letter,” Maor said. “They took a letter paper of the chief rabbi’s with his signature and switched his content, probably by scanning it,” he said.

Rabbi Amar will issue an actual statement about women’s megillah reading this week, however, said Maor.