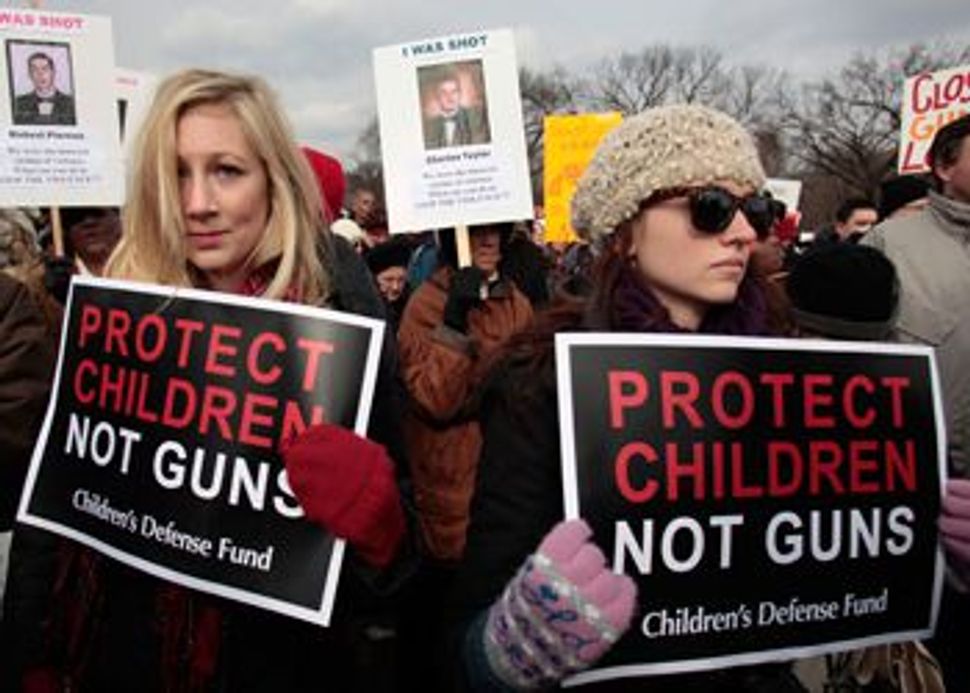 Protestors demonstrate at the March on Washington for Gun Control on January 26, 2013. Image by Yuri Gripas/AFP/Getty Images

Before December 14, 2012, Sara Smith Smirin, who lives in California’s Silicon Valley, had no plans to fly the next month to Washington, D.C. However, the mass shooting at Sandy Hook Elementary School that day induced her to make the trip to the nation’s capital on January 24 to witness Senator Dianne Feinstein of California introduce the Assault Weapons Ban of 2013, a bill to stop the sale, transfer, importation and manufacturing of military-style assault weapons and high-capacity ammunition feeding devices.

Smirin, Director of Marketing for Jewish LearningWorks in San Francisco, was in Washington as a representative of Moms Demand Action For Gun Sense in America, a grassroots organization that sprang up and into action at lightning speed following Sandy Hook. After initially connecting with other moms in her community to establish a local chapter of the organization, Smirin quickly assumed a leadership role on the national level.

“It started with a bunch of moms talking to one another and saying they were not going to take it anymore,” Smirin, who has two young sons, told The Sisterhood by phone. The movement, which began as a Facebook group created by a woman named Shannon Watts in Indianapolis, has gone viral, amassing almost 100,000 supporters in just two months.

This past week has been the busiest yet for the movement. The organization designated five days as “Moms Demand Action Week,” and urged members to flood the offices of their elected representatives (by email and social media, and in person) with demands for “common sense gun legislation,” as Smirin put it. “We’re a non-partisan, inclusive organization. We understand that the Second Amendment guarantees the right to keep and bear arms. We’re not about taking away gun rights.”

This week, the organization rebranded itself, changing its name from One Million Moms For Gun Control, and it also launched its own “Demand A Plan” video. The video, in which Smirin appears at the 45-second mark, joins many others in a campaign started by Mayors Against Illegal Guns.

Smirin said she is driven this time, as she has been in the past, to “work on causes to better our lives.” Smirin supposes this might stem from her Jewish upbringing. “It could be a tikkun olam thing, but it’s really just who I am.”

She did share that in regard to gun control issues, she has been inspired by another Jewish mother. “Veronique Pozner [mother of 6-year-old Sandy Hook victim Noah Pozner] is an inspiration because she is willing to speak publicly and vocally about her grief, and about her struggles with her grief. And in doing so, every time she does so, she is a reminder of parents everywhere who wake up every day with an infinitely deep child-sized hole in their lives,” Smirin said. “She reminds us that no parent in Oakland or Chicago or South Central L.A. or Newtown — or in any other part of this country — should have to worry about their child being taken by inexplicable, unnecessary gun violence.”