Silent and Invisible on Purim 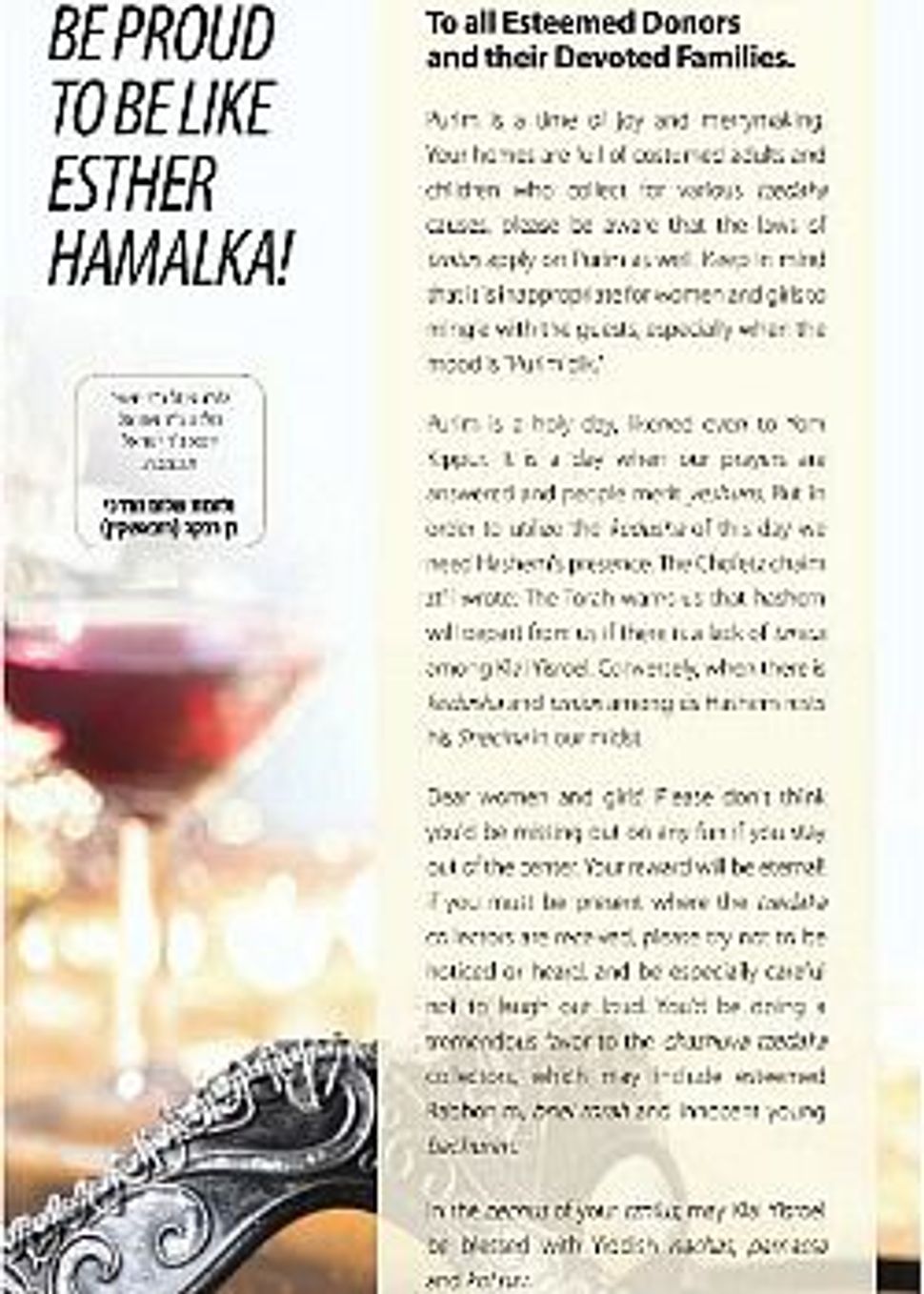 Should women dress up on Purim to reveal their true selves or to mask them? For religious Jewish women and girls in Monsey, New York, it was a moot question yesterday: They were only supposed to make themselves silent and invisible.

An ad in the free weekly circular “Community Connections,” which is distributed widely in the Monsey area’s frum community, was addressed to women and girls. It says:

Please don’t think you’d be missing out on any fun if you stay out of the center. Your reward will be eternal! If you must be present where the tzedakha collectors are received, please try not to be noticed or heard, and be especially careful not to laugh out loud.

That’s right, women and girls, make yourselves silent and invisible. Better not to come to give charity even on this holiday that requires all Jews — even those who are female — to give tzedakha. And do not dare have the chutzpah to laugh out loud even on this holiday of joy and celebration, lest you tempt the charity collectors.

The Monsey area is home to Jews connected with several different Chasidic communities, including Belz, Ger, Satmar and Lubavitch, and in nearby New Square, Skver Chasidim, along with non-Haredi Jews.

The “Community Connections” ad illustrates the insidious creep of modesty as being the single defining issue of femaleness as understood and demanded by men in Haredi communities today. While I understand that it is a reaction to the immodesty that runs rampant in the world around us (have you seen those near-pornographic American Apparel ads?), it also shrieks of imbalance, pushing us into an archaic Catholic paradigm in which women are either virgins or whores. This one-dimensional view of women and girls leaves no space for wholeness.

It is a further extension of the trend of the last year or two to blur out girls’ faces in ads for toy and Purim costume shops. In response to the furor surrounding that shift, this year girls were omitted entirely from Purim costume ads in some Israeli Haredi publications. Of course, skimming a recent issue of “Community Connections” I could not find any image of a woman or girl either, though a couple of advertisements did show men.

The Purim “Community Connections” ad is headlined “Be proud to be like Esther HaMalka,” or Queen Esther. But Esther wasn’t completely hidden, as this ad bids women and girls to be. She stood up when her community needed her. I hope that Monsey-area Jewish women have the courage to do the same.

Silent and Invisible on Purim