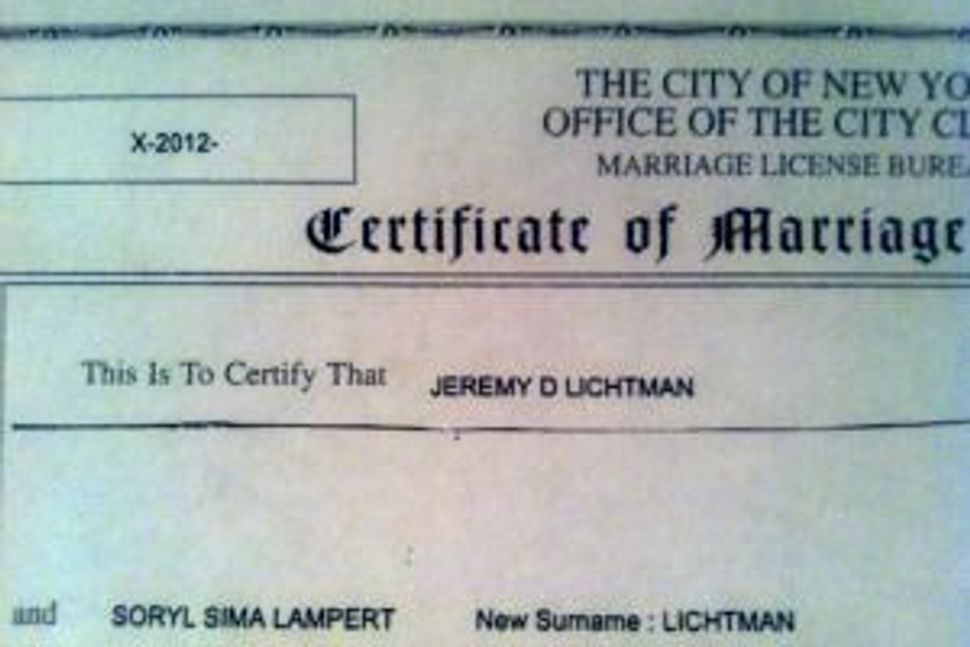 Simi had no hesitation in taking Jeremy?s last name. Image by Simi Lichtman

Unlike many women in my position — that is, married — I never spent any time debating what last name would follow my own personal Mrs. Unlike Sisterhood blog editor Abigail Jones, I was never “paralyzed” by the last name conundrum and all the baggage that comes with it, because for me it wasn’t a conundrum. I always knew that I would take my husband’s name.

That’s not to say the last name debate seems trivial to me. On the contrary; I grew up with my own last name dilemmas, and they started way before I began thinking about marriage. My father died when I was three, and my mother got remarried before I turned five. My siblings and I all took on our stepfather’s last name — but not legally. We were raised Eisenmans — in school, to our friends, even on our doctor’s files — but to the government, and on all our legal documents, we were Lamperts. 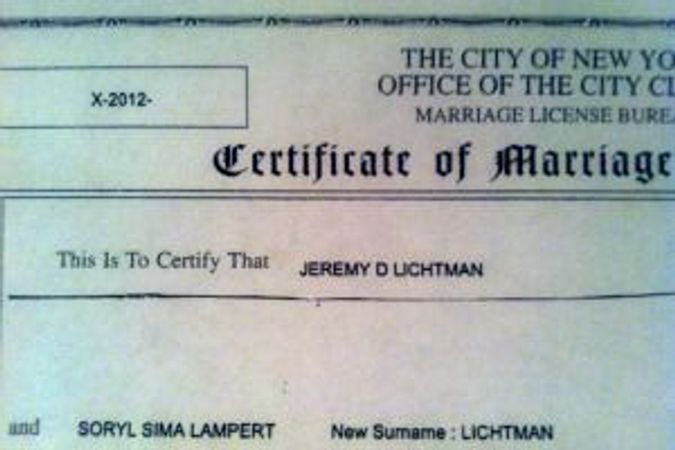 Simi had no hesitation in taking Jeremy?s last name. Image by Simi Lichtman

This disparity didn’t really matter when we were younger, when our only real legal documents were our passports. I resisted choosing between my legal last name and the one everyone knew me as for as long as I could — through high school, I continued to be known as Simi Eisenman, despite the “Lampert” clearly printed on my driver’s license. But then I went to college, where my legal name was on file and on all the class rosters, got confused, and took my Simi Eisenman Facebook account, added a Lampert, and became Simi Lampert Eisenman.

When people asked me my name, I would feel overwhelmed by the options. Do they know my parents? Are they trying to play “Jewish geography”? If so, which last name will they know?

“Is that a hard question?” they would joke, not realizing just how confusing it actually was. Who doesn’t know their own name? I secretly wished I could get away with just having one name, like Cher or Beyonce.

Choosing a last name was more than picking a title, though, or playing Jewish geography. To me, it always felt like I was stating a preference. If I went by Eisenman, my Lampert grandparents might feel like I was choosing my stepfather over their son. Perhaps it would seem like I was disrespecting my dead father, and indifferently erasing his memory and the part of me that comes from him. On the other hand, choosing Lampert felt like an equally cold statement, one that said I didn’t respect or appreciate the man who raised me, that I didn’t belong in part to him and his entire extended family. So I went with Lampert Eisenman, and would try to avoid giving a last name as often as I could.

To me, then, the idea of choosing just one last name upon marriage seemed like the answer to my problem. I get married, and boom! I have one last name. Done. Settled. I am Lichtman. It was easy to ignore the implications of going with my husband’s last name – was I being a bad feminist?

On top of all this, growing up with a different legal last name from my parents was difficult enough that I knew I would want the same last name as my children. Maybe it was just the part of me that needed to justify my own decision, but I came up with a whole list of reasons that keeping my own name wouldn’t be a good choice no matter what: My children would have a different name than I would, or, if they took mine, different from their father’s. People would just assume I went by my husband’s name anyway. My family wouldn’t be “The Lichtmans,” we’d be “The Lichtmans and whatever her last name is.” Choosing my father’s (a man) last name over my husband’s (a man) last name didn’t seem all that feminist, anyway.

Changing my last name was an easier process than I expected. We got married in the state of New York, where you can state on your marriage license your intention to take on your husband’s surname. Seeing as I needed a new driver’s license anyway, I simply took my shiny new marriage certificate with me to the DMV and had the clerk put Lichtman as my last name. It’s official; I’m a Lichtman. (It was even easier to change it for my career, as I simply emailed my editor and asked that I now be published under the name Simi Lichtman.)

Lichtman isn’t the easiest name to pronounce, and I’ve learned to accept that most people will call me Licktman. As the only son in his family, it’s important to Jeremy that he carries on the Lichtman name, and I’m happy to help him out. But I’ve never put too much significance into a last name; no matter what, I’ll always be Simi. Last names, for me, can come and go. And I’m happy to finally have one last name to stick with. Forever.