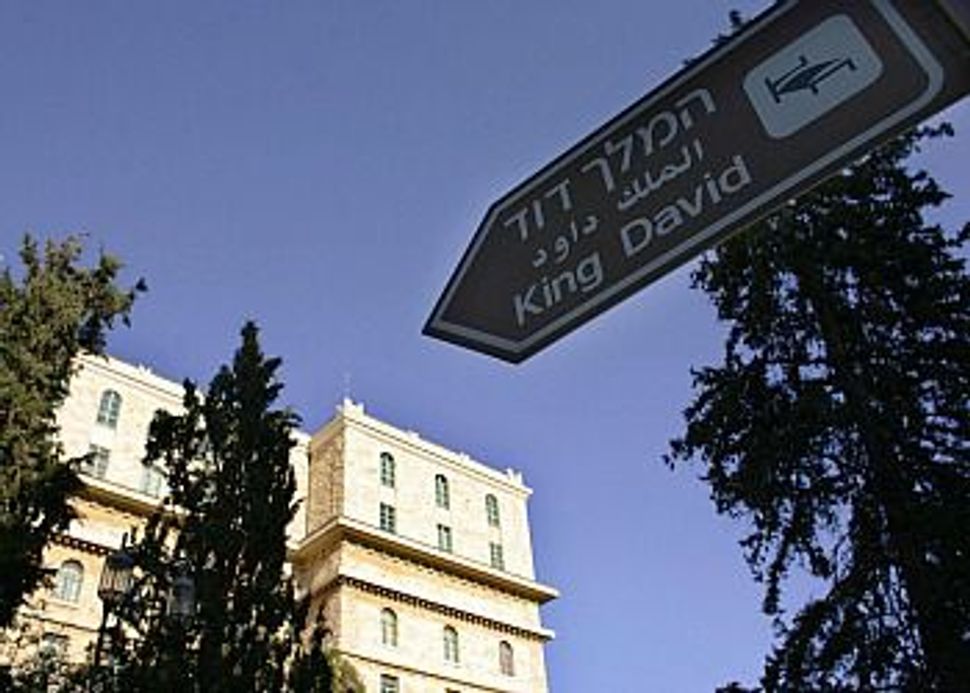 I never really paid close attention to the street signs in Jerusalem until a couple of years ago, when I missed an important turn onto Golda Meir Blvd. I missed the turn because the local Haredim had erased the print on the sign. They were obviously far more concerned about removing a woman’s name — let alone her image — from a sign than about drivers such as myself getting lost.

So I am sensitive about matters having to do with Jerusalem street signs, especially when feminist issues are involved. It’s no surprise, then, that I took note of a story Jerusalem councilmember Rachel Azaria posted on her Facebook page about a group of high school students who took it upon themselves to address the fact that signs for streets named after female biblical figures identify the women only by their relationship to men. Meanwhile, the signs for the male characters include full-blown descriptions of their significance to the biblical narrative and the Jewish people.

For instance, Esther is identified only as “the cousin of Mordechai.” All it says on the sign for Rachel Imeynu (Rachel the Matriarch) Street is that she was “wife of Jacob and mother of Joseph and Benjamin.” By way of comparison, King David is described not as the son of someone, but as “one of the great kings of Israel.”

According to an article in Maariv, the students, members of a group called “Atid [Future] — Students for Tikkun Olam,” fanned out all over the city to survey the blue signs marking streets named for biblical figures and found that at lead 11 biblical heroines did not merit accurate and objective descriptions of their deeds. So, the students did their research and formulated their own descriptions for the women and put them on new signs, which they erected on the relevant streets.

Esther is no longer just the cousin of Mordechai. Now, her sign reads:

After she was first afraid for her own fate, she recovered and decided to put her life at risk for the sake of her people. Through a number of actions, she succeeded in defeating Haman and saved her people from destruction.

And the students’ sign for Rachel Imeynu Street says”

Rachel was one of the four Matriarchs of the Jewish People. Her rare and wonderful love story with Jacob described over many years, her mighty yearning for a child and her tragic death while giving birth to her son Benjamin, turn her into an heroic character and a focal point for women suffering from infertility.

The project brought together secular and religious youth, all of whom were bothered by the lack of equality. “Women are as important as men, and it denigrates and them and us when the explanation on the sign is based on what the men in their lives did,” said 10th grader Alon Schlein.

Tenth grader Elinoi Talbi added, “The project deals with the status of women. These are things that affect us today, affected in the past, and will affect in the future. Those women deserve to be noted for their accomplishments, and it’s important to return to them the status that all women deserve.”

The students sought support for their project from Azaria, who leads the Yerushalmim party and is known for her leadership on issues of religious pluralism and women’s rights. She wrote on her Facebook page that they invited her to join them as they stealthily put up their signs last week.

The city’s official response to the teens’ efforts was to thank them for their initiative and to offer to review the students’ research and results with them. It concluded its statement with the assurance that “the municipality is proud of the many women who are memorialized in the names of the city’s streets.”

I, for one, will keep my eye out for the “Atid” students’ signs the next time I’m in Jerusalem. I can only hope they will still be there, not torn down by people who unfortunately don’t share the young people’s vision for the future of the Holy City.