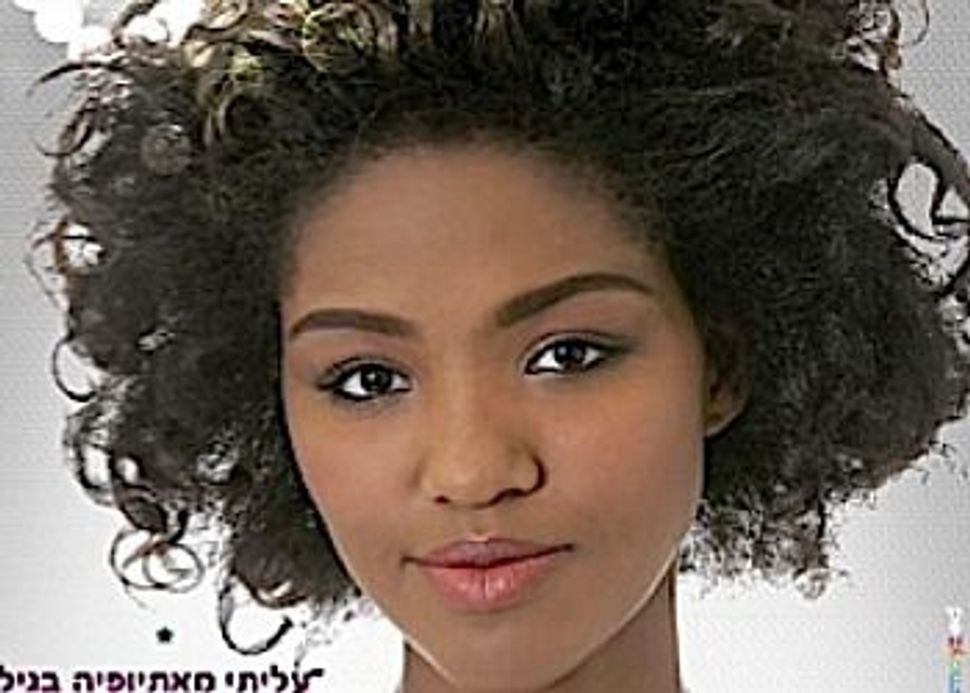 Former IDF officer Yityish (Titi) Aynaw, 21, was crowned Miss Israel 2013 last Wednesday night. Besides from earning the title of a beauty queen, Aynaw also made history by becoming the first Ethiopian-born woman to ever win the beauty pageant. Yet the confetti had barely finished landing on the floor of the fancy stage when social networks started buzzing with comments about whether or Aynaw was, in fact, the most beautiful women in the pageant.

“I think it is really great that an Ethiopian-born woman won our national beauty pageant, I really do. If she were also beautiful it would have been even better,” wrote an Israeli journalist on his Facebook page. Someone left the following comment in reaction to an article about her victory on the Israeli news website Mako: “It may sound racist, but it is really not— I am certain they did not pick her for her beauty. She is not that beautiful. They could have at least choose someone more beautiful than her.”

(It is worth noting that most of the reactions about her beauty had nothing to do with the color of her skin. But racism is a sad phenomenon that represents a minority opinion among ignorant people.)

Some said Aynaw was chosen in advance so that Israel could show to the world its pluralism (the Israeli Apartheid Week is at its peak worldwide). Some said that she was very beautiful, and that it was the photo of her in the newspapers which wasn’t doing justice with her, while still others argued that “beauty” is subjective. I say that beauty is more than meets the eye. After 64 years of national beauty pageants, I would expect everyone to realize that in order to become the most beautiful woman in a given country, especially in a place like Israel, you must have far more than outer beauty.

Being Miss Israel is not just a title. It demands more than simply walking without falling while wearing high-heels, or showing off your body in a swimsuit. There are countless beautiful women, but not just anyone can take on this kind of important responsibility. But Aynaw can. Over the course of 2013, she will be the face of Israel. She will represent our country at the Miss Universe competition, where she will be interviewed and may be asked some challenging political questions. She will represent a controversial state, which is not an easy task. She will devote herself to a main cause and an agenda. She will volunteer and help and assist. And she will smile through it all. Since Israel is not your average state, Miss Israel is not your average beauty queen.

Beyond waving, beyond smiling, beyond looking gorgeous in an evening gown, being a Beauty Queen means taking responsibility in representing a state you truly feel a part of and believe in. It means facing any accusation, as well as presenting the true beauty of a country — all the while saying all the right things. I don’t know Aynaw, but I do believe that if she was chosen to be Israel’s beauty queen, she must be the right person to fulfill the complicated task of being the face of Israel. My country believes in her, and therefore, so do I.