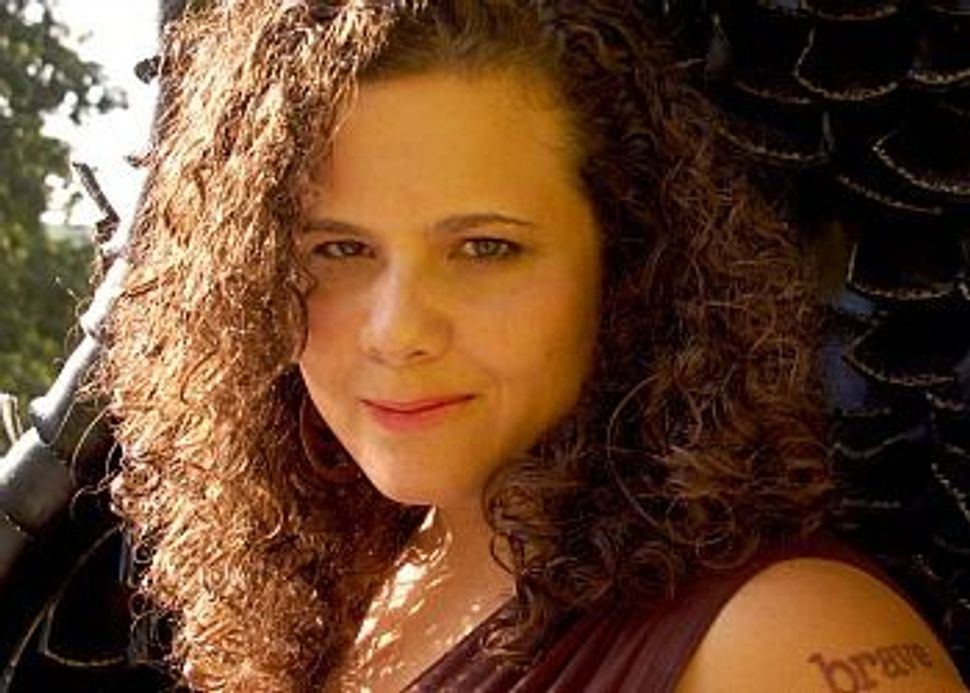 In Jaclyn Friedman’s weekly podcast, “F—ing While Feminist,” Friedman first chats with a guest about the latest political and cultural salvos around sexuality. Then she and the guest answer intimate questions from listeners seeking advice. As the show’s bold name suggests, its hostess is no stranger to the combination of sex talk and activism: Friedman is also the co-editor, with Jessica Valenti, of the anthology “Yes Means Yes! Visions of Female Sexual Power and A World Without Rape.” The book emphasizes the idea of “enthusiastic consent” — a hoped-for paradigm in which sex exists not as something one partner asks for, but as an activity wholeheartedly embarked upon by both. As Friedman, also the executive director of gender justice in media group Women, Action & the Media, told the Forward’s Sarah Seltzer, her approach gets her called both a “slut” and a “prude” by confused critics, exploding the virgin-whore dichotomy.

No shrinking violet on the toughest of issues, Friedman has recently spoken up about the Israeli-Palestinian conflict, saying it’s her duty as an American Jew to wade into the discourse. She chatted with the Forward about Jewish mothers, rape culture, enthusiastic consent and taking away Israel’s car keys.

Sarah Seltzer: Let’s start with what we joked about when setting up the interview: the contrast between appearing in the Forward and our anticipated subject matter.

Jaclyn Friedman: What, that my poor mother has to couple her pride in seeing me profiled in the Forward with the fact that I’m swearing, talking about sex and criticizing Israel? I feel bad for her. She’s unbelievably supportive, even when I spend most of my career doing things that make her a little uncomfortable. She kvells. She’s just selective about whom she kvells to.

Yes. I think my entire career gives her a kvell-plotz duality.

Speaking of Jewish mother figures, it’s been 50 years since Betty Friedan’s “Feminine Mystique” was published. The political still bleeds over into the personal, doesn’t it?

That idea is at the heart of my work. In fact, the tagline for my podcast, “F—ing While Feminist,” is “where the personal and the political get intimate.” It was born [of] an interview with [writer] Amanda Hess talking about how challenging it can be to live feminist values in my real-world sex life. People were so hungry for the conversation! Now it’s baked into the podcast cake: I talk with a guest about sexual politics, and then we take a listener advice question.

Are there questions that come up regularly in the advice segment?

The main theme is: how do I negotiate the messy places? Whether it’s about honoring your relationship with your mother while letting her know that she’s hurting you with her attitudes, or how to love your body while also genuinely wanting it to be different, the questions are almost all about trying to live our ideals in the messy world.

You’re pro-sex but anti-rape, which shouldn’t confuse people but does. Has there been a noticeable cultural shift, though, as you and others have introduced the idea of “enthusiastic consent”?

When I’m speaking to students on a campus, usually at least some of them have heard the term “enthusiastic consent.” And the magic of enthusiastic consent is that usually no one wants say, “Oh no, I have to only have sex with people who are into it?”

The pushback I do get has to do with a myth that enthusiastic consent means that you have to get notarized permission for every different inch of skin you want to touch. I try to talk with people about what sexual communication looks like, and validate that it seems weird and scary not because it has to be, but because we don’t see it modeled almost anywhere in the mass culture.

Do you think the sex scenes in HBO’s “Girls” — other controversies about that show aside for the moment — are moving us forward in terms of mass culture models? Are there other movies or shows that are better than the rest?

Confession: I have only watched the “Girls” pilot. I should go back and watch the whole thing because it’s so related to my work. From what I know, I like that it’s frank about how awkward sex can be. And I like the idea that so much of Hannah’s sex life seems to be her trying things and deciding what she thinks. I’m a big fan of sexual exploration as a tool for liberation: If we don’t take risks, how can we learn what our needs and boundaries are?

“Scandal” is doing some interesting things about black women’s sexual agency. I’m having two women who wrote about it on the next episode of the podcast!

Fraught feminist conversations about marriage, rings and name-changing have been everywhere of late. Does the dating and sex advice you offer extend to that realm?

There has been so much talk about name-changing and rings lately! I’ve never been married, so I can’t speak from personal experience. But there has to be a place between “Whatever my choice is is feminist because I chose it,” which is meaningless, and some feminist ideological purity test around every single thing we do.

We should acknowledge it as, “I choose my capitulations to the patriarchy.”

We all do things rooted in the patriarchy. But we can at least be honest about how and why we make those negotiations. If I got married, I would probably do some traditional stuff, and subvert other parts. I’m kind of a romantic, and I love a lot of the trappings of weddings. But I also don’t like what they represent.

Do you think your Jewish identity has affected your activism?

To me, they’re inseparable. I learned to be an activist through my involvement with [the Reform Jewish youth movement] JFTY, now NFTY-GER, and through my rabbi, Sally Priesand. She was my first feminist role model, though I don’t think I knew that at the time. I just knew she was brilliant and a trailblazer.

You recently wrote a piece for the American Prospect about the Israeli-Palestinian conflict, “It’s Time for Some Israel Real Talk.” In it, you compared Israel to a drunk friend whose car keys need to be taken away. Was this less or more controversial than the sex advice?

You know, when that piece went live, I thought, “And now we wait for the hate mail.” But there’s been no backlash so far, just warm and supportive response, although I think it’s telling that a lot of the response was private.

I feel like my work in the world is breaking silences. And so the Israel piece and the sex talk both come from the same well.

There’s a long tradition of Jewish women who speak up when others don’t.

In one of my bios it says, “She comes from a long line of opinionated women.” And it is very true. My mother’s motto has always been: “Ask. The worst they can say is no.” I think that influenced me. You know, what’s the worst that can happen if I say these things? Somebody yells at me? It comes back to Jewish teaching: It is not yours to complete the work. Neither is it yours to desist from it.