Threat of Violence to Women of the Wall Event 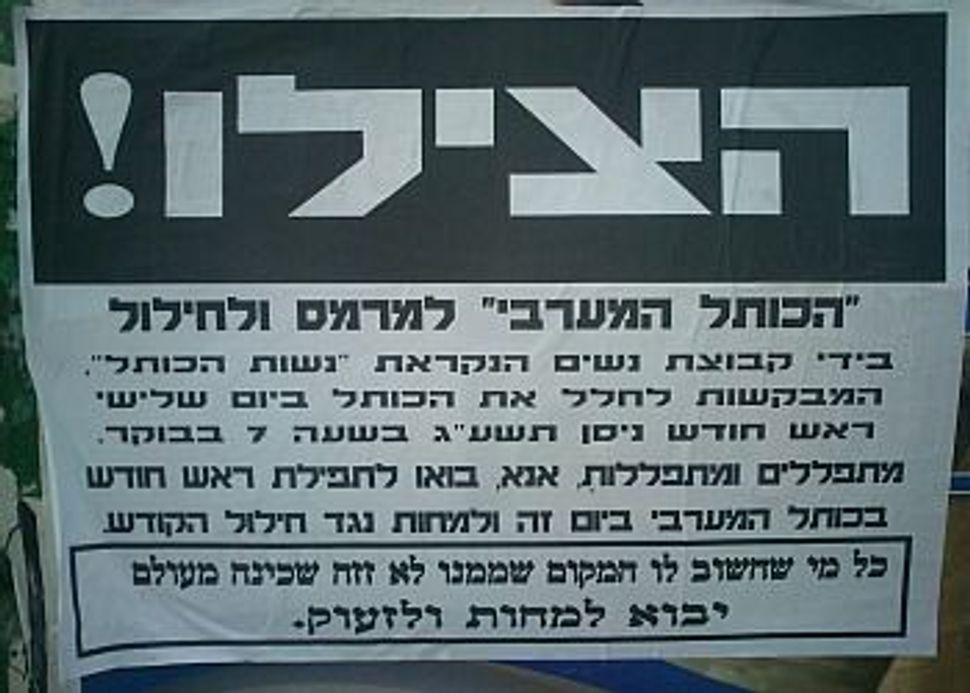 One of the pashkevilim found in Haredi neighborhoods in Jerusalem. Image by Women of the Wall

Right now, the women behind Women of the Wall are concerned about more than the chance of being arrested for wearing a tallit at the kotel on Tuesday. As they prepare to come out in large numbers for Rosh Hodesh Nissan, both at the Kotel itself and at solidarity rallies in New York and other American cities, they are also worried about what appears to be a possible incitement to violence against them.

This past weekend, pashkevilim, or traditional black and white text-only wall notices, were found posted in Haredi neighborhoods in Jerusalem. They called on people to “Save the Western Wall from trampling and desecration at the hands of a group that calls itself of “Women of the Wall.” Male and female worshipers were encouraged to go to the Kotel at 7 a.m. on Rosh Hodesh (the time for which the Women of the Wall service has been called) to protest against Women of the Wall. “Whoever cares about the place from which the divine presence never shifts, should come and protest and cry out!”

Women of the Wall responded Sunday to these posters in a press release. “Though there were no rabbis signed or taking responsibility for this call, as is customary on pashkevillim, it would seem that someone anonymous has an interest in opposing Women of the Wall’s prayer, despite the relative quiet of the last few months,” the statement said. “Aside from police detainments (43 detainments of women in six months), the prayers at the Kotel have gone undisturbed lately, and the Purim celebrations proved that without violent opposition or police intervention, the Jews present are quite capable of tolerance and sharing the holy space.”

Women of the Wall chairwoman and executive director of the Israel Religious Action Center Anat Hoffman wrote a letter to the Minister of Internal Security and the Israeli chief of police, asking them to provide additional protection to Women of the Wall on Tuesday and to open an investigation into the origin of the pashkevilim. Making a formal complaint of “incitement of violence against Women of the Wall,” Hoffman wrote she was concerned that in the past, calls to action among the Haredi population using similar language have led to violence and attacks on civilians.

Women of the Wall has been working for two and a half decades to achieve the social and legal recognition of women’s rights to pray while wearing prayer shawls and reading collectively and out loud from the Torah at the Western Wall.

In 2003, Israel’s Supreme Court upheld the right of Women of the Wall to pray at the kotel according to their custom. However, the court also ruled that this right was “not an unlimited right” and that the rights of others who might be offended by the group’s customs should also be protected. The legal decision also emphasized the importance of maintaining order and preventing violence at the holy site.

This has left the interpretation of what is legal and what is not to the police. Amichai Lau-Lavie, a male rabbinical student who comes out every month to support Women of the Wall, said in a recent interview with The Sisterhood that the police change their minds from month to month about which tallitot the women are permitted to wear and which they are not. “There’s no sense of rhyme or reason. It’s arbitrary and it keeps changing.”

Let’s hope things don’t get ugly at the kotel on Tuesday. But should Haredi demonstrators start a provocation against Women of the Wall, the police will have a much bigger problem on their hands than how to decide which style of tallit is acceptable for a woman to wear. With Anat Hoffman’s formal complaint and the groups’ dissemination of photos of the pashkevilim to media outlets, they will not be able to say they weren’t warned.

Threat of Violence to Women of the Wall Event