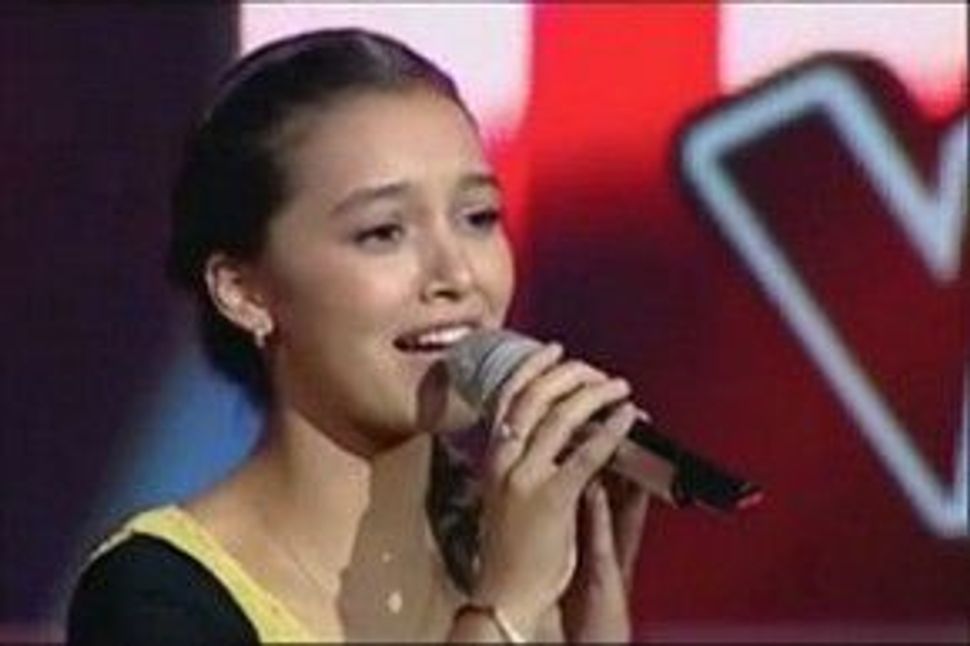 It appears that Ophir Ben-Shetreet’s suspension from her religious girls high school for singing in public on Israel’s “The Voice” has had no effect on her performance. Ben-Shetreet has beat out 11 other competitors on mentor Aviv Geffen’s team to reach the show’s second season final round, which will be broadcast live next Saturday from Tel Aviv’s Nokia Arena.

Equally exciting is the fact that it will be an all-female final, with 17-year-old Ben-Shetreet trying to outperform three other young women. The others finalists are: Rudy Bainasin, a 22-year-old military officer who made aliyah to Israel from Ethiopia as an infant; Lina Makhoul, a 19-year-old Christian Arab who works in retail and volunteers with the Magen David Adom, and Dana Tzalach, a 22-year-old professional makeup artist who speaks openly about her struggles with her weight.

The fact that all four women come from “the periphery,” as Israelis refer to towns and cities outside the country’s central (and generally wealthier) region has not gone unnoticed. (Ben-Shetreet is from Ashdod, Bainasin from Netanya, Makhoul from Acre, and Tzalach from Gan Yavne.). “Each one of them could be a Cindarella story,” Nadav Menuchin commented on Walla. He noted that from their first auditions, he suspected that Ben-Shetreet, Bainasin and Makhoul would make it to the final round. Tzalach, he said was the dark horse.

Menuchin’s money is on Ben-Shetreet to win on Saturday. Whether or not she comes out on top, she’s already a winner to many viewers for successfully navigating a course on which she stays true to her religious values while following her artistic dreams.

As moving as it’s been to hear Ben-Shetreet’s angelic voice on the few “Voice” videos that have not been blocked to viewers outside Israel for copyright reasons, the most touching clip I’ve seen has been of her visiting a synagogue with her mentor, Aviv Geffen. In it, she has a heartfelt discussion with the secular rocker about religion and spirituality, explaining how her belief in God helps her know what she is meant to be doing here on earth.