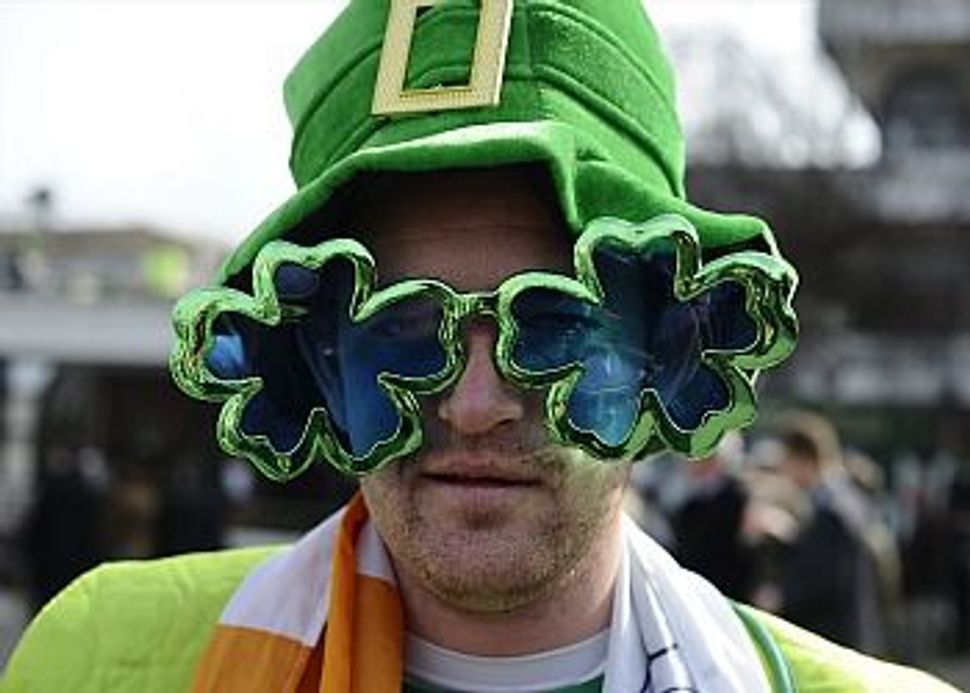 St. Patrick’s Day was yesterday, but I feel like it’s been here for weeks. Perhaps because there’s a commercial void between Valentine’s Day and Easter, this Irish Catholic feast day has permeated America so thoroughly that you’d think it was a national holiday. The muffins and bagels at the supermarket have been dyed green since early March, and the seasonal aisle overflowed with green beads. My wall calendar, on which each month is printed in a different, seemingly random, color, March is a cheery green. Amazon.com decorated their homepage with a shamrock; click on it and you’re taken to a page full of Irish-themed products. There are shamrocks on the streets of my city, too — they’re stenciled there to mark the parade route, but the paint is permanent so they remain there all year — to no one’s objections. And everywhere, I keep noticing the catch-phrase, “Everyone is Irish on St. Patrick’s Day!”

What amazes me, as a member of another minority group familiar with historical marginalization, is how strange and wonderful it is that everyone wants to be Irish. The Irish and the Jews have both “made it” in America. A Jewish or Irish individual can now achieve virtually anything anyone else can. But what the painted shamrocks on the streets remind me is that personal equality does not always extend to the group. Imagine a holiday in which all Americans were repeatedly told that on that day, they were Jewish too. I don’t think very many would be thrilled about it.

Picture it for just a second. What if for a few weeks store-bought baked goods were blue. What if elected officials of all backgrounds wore blue and white ties or cardigans, and marched in parades, proclaiming their connection — if only an emotional one — with the Jews. What if cities filled their rivers with azure dye, and stenciled blue stars of David on their roads, and advertisements touted the momentary Jewish-ness of the entire population. It’s only possible to think about this for a second, because it’s too ridiculous. A few philo-Semites would happily get behind it for the music and the food, but a far greater number would see something sinister in the whole enterprise. It would be too dangerous, too high a price to pay for a few weeks of fun.

I once lived in the Irish neighborhood of St. Louis, known as Dogtown or Clayton-Tamm. It was a little bit like St. Patrick’s Day year round. Fire hydrants were painted green, and Irish flags flew. Businesses had Irish themes, or names, or both. When it really was St. Patrick’s Day, the neighborhood had its own parade, less flashy than the city’s larger parade downtown, but quite impressive nonetheless. I could open my kitchen window and look down into a blur of green: decorated cars and fire trucks, little dancing girls in sparkles, spectators lining the way. Though I don’t particularly love parades, I did like sitting up there watching that one go by. It wasn’t the clog dancing that I liked, though; it was the freedom, the complete lack of fear, the uncomplicated pride and happiness of a group of people who have faced hardships and struggles but know that now, they can relax.

This is the point where I suppose I could advocate (or at least wish I could) for those final few stages of cultural progress that would open up the possibility of a Jewish equivalent to St. Patrick’s Day in America. But I don’t want that. I can’t imagine Jews going for that kind of joyous public display anyway. Maybe it’s that I’ve been to New York’s Israel Day Parade, a.k.a Salute to Israel Parade, a.k.a. Celebrate Israel Parade, and I know we’re not exactly the best parade-throwers out there. We can’t even stick to a name.

But I think mostly I (or we) do not aspire to this level of acceptance because Jewish history has trained me (or us) too well. I enjoy watching from the outside — or the kitchen window — the celebrations of groups who no longer need to look over their shoulders. But I am fine with knowing we Jews will never be among them. There is also pride in having learned, over the millennia, that customs do not need widespread acceptance to have beauty and meaning.