The Four Daughters of ‘Girls’ 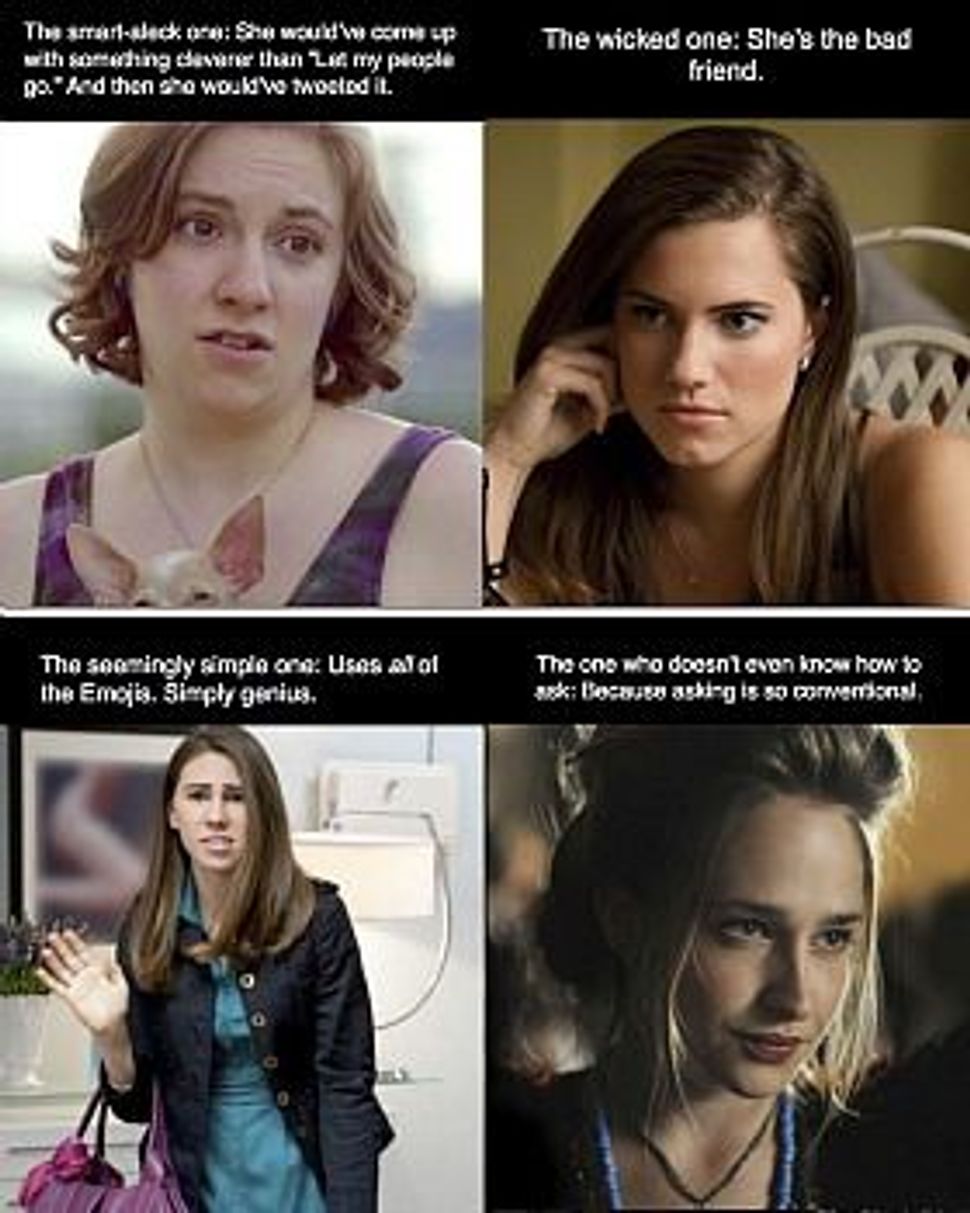 In families, we’re often called upon to play archetypal roles — the good one, the black sheep, the fun one, the responsible one. And nowhere are those “roles” more carefully scripted and ossified than in the Passover Haggadah, where we read about the Four Sons: the wise one, the wicked one, the simple one, and the one doesn’t even know how to ask.

Of course, very few of us can wear any one label comfortably— even if my family jokingly often asked me to read the Wicked Son’s portion due to my lapsed Orthodoxy. (Don’t worry, I wasn’t at all offended. I totally relished the appellation.)

As a youngster and teen, I was never bothered by the fact that I was asked to read the male role. I hadn’t really given much to thought to the lack of female voices in the Haggadah. And I never challenged my parents by asking, “Why sons and not daughters?” I was used to the idea of a male universal and was okay with it. More than once, I played a boy in school plays. (All-girls schools’ dramatic productions reverse the rules of kabuki and Elizabethan theater.) That I wasn’t fully represented by the gender options was perhaps due to the fact that I wasn’t really represented by the character options, either. I was not wholly wicked, nor was I completely wise or simple. And hearkening to the idea that sometimes you can ask a stupid question (despite my teacher’s insistence that you could not), I sometimes kept my mouth shut when I had something that I considered idiotic to ask.

The inadequateness of the four haggadic character categories really hit me as I attempted to duplicated the brilliance of the “Arrested Development” Four Sons meme I had seen circulating around Facebook. I had just finished watching the season finale of “Girls” and it seemed appropriate to take the four female characters and try to affix the Haggadic labels to them.

Except that none of the labels seemed to fit any of these women very well. They could all be smart at times and occasionally say something so utterly insightful, you’d be thinking about it for hours after. But could any be characterized as wholly wise?

None were wise if wisdom is to be measured in careful thought and judicious action, ever heedful of potential consequences. These women make some really terrible choices, sometimes knowingly but often without any sort of awareness. Wisdom didn’t seem to fit any of these women very well. That’s why “wise,” morphed into “smart-aleck,” which is the sort of intelligence that Hannah has in spades. She is often clever, the most important type of intelligence on the Internet and Twitter.

All four women can and have acted wickedly and selfishly throughout the series.

With the exception of Shoshana, the most under-developed character, they could’ve all slipped easily into this category. Early in the show, Jessa and Hannah were the most obvious choices for this title, but of late, Marnie seemed to be gunning extra hard for the appellation so I gave it to her. But she could easily be dethroned if any of her character’s responsible nature ever resurfaces or if Hannah does something newly egregious.

And though it was tempting to cast Zosia Mamet’s naive Shoshana into the role of least knowledgeable, I couldn’t do it. Not after she showed a surprising degree of self-awareness and maturity in her breakup with Ray. She recognized that his negativity was toxic and told him as much. She understood her own needs and acted accordingly.

Early into the show’s run, “Girls” was often criticized for not representing all young women in its demographic, or even all young white women. Leaving aside the systemic issues of race, class, and diversity in Hollywood — of which “Girls” is a symptom, not the cause — there seemed to be an unreasonable expectation that a show created about women and by women should represent all of them, as though women were a special interest group or movie going quadrant instead of half of the population.

As though one show could represent all of femaledom. And as though four labels — wife, girlfriend, daughter or mother — could represent all women. For all of its faults, Lena Dunham has created complicated female characters who defy easy categorization — or at least of Haggadic variety.

The Four Daughters of ‘Girls’