A Slob Takes on the Gendered Cleaning Debate 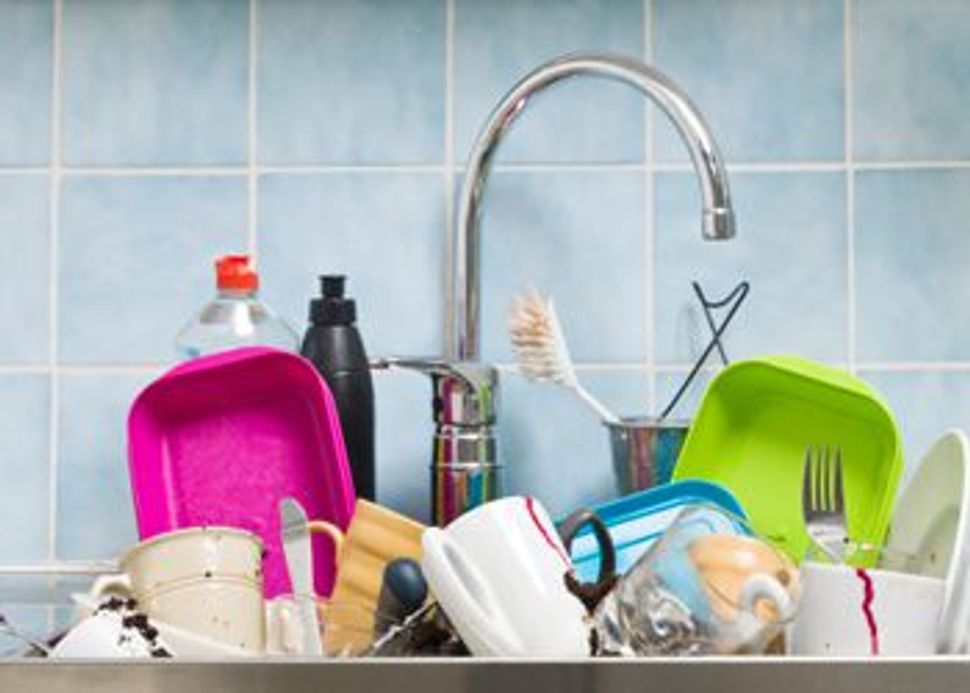 Jess Grose, writing at the New Republic, has kickstarted a provocative discussion about partnerships and housework with a piece called “Cleaning: The Final Feminist Frontier.” She notes that the culture shift that has brought about many men’s newfound willingness to help cook and parent has not been matched by an eagerness to scrub the darker, grimier corners of the home. And she notes that for women, the desire to clean is often driven by social pressure: “Unfortunately, the notion that women will be the first to be judged for a messy home and the first to be commended for an orderly one isn’t much of an incentive for men to pick up a mop.”

Jonathan Chait responds that the problem is overly sparking standards of cleanliness. He argues if women were content to be messier, the work level would slide to 50-50. Case in point: stacking magazines. He doesn’t care about stacking and his wife does, so when she stacks, that’s optional work, not bedrock housecleaning. In other words, “the assumption of much of the feminist commentary [is] there is a correct level of cleanliness in a heterosexual relationship, and that level is determined by the female.”

I actually think both of these points are true. Men need to “lean in” to 50% of the chores and at the same time, order-obsessives should bother less with housework. I have often felt, as Chait does, that one way to help the gendered cleaning disparity would be to find a standard that is halfway between the neater person and the less neat person in the relationship — which is often but not necessarily determined by gender. But I also think Chait glosses over Grose’s point about women bearing the brunt of social judgment. Once that compromise standard is determined, men need to commit to doing their equal share or there’s no point in renegotiating the standard at all. Amanda Marcotte takes umbrage with Chait’s point by noting that over the years, women have stopped doing nearly as much around the place as they once did, but the disparity remains: “Women have, in other words, implemented the Chait solution and yet they still do more of the housework. Men’s contributions have to go up. That’s all there is to it.”

An overall slackening of the ideals of house-proud living would suit me fine. I have a creative personality — in other words, I’m a slob with brakes. I let things go, then go on frenzied binges of cleaning. This style works okay for me despite my guilt; I remember where I’ve left something, even if it’s on a pile of other somethings. I even regard most anally-neat people as prosaic and finicky (although I’m thankful to be surrounded by them, because I do tend to trail things behind me and they pick them up — so thanks!).

But the reason I, a woman with low standards, am willing to give Chait’s argument some credence is this: Just like Grose does when her father-in-law is due to visit, when I have guests over I often go into what my husband calls “Lady Macbeth” mode and start scrubbing out every damn spot. This is ironic, because I’ve long known that our friends like coming to our home precisely because it’s not spotless. They don’t have to worry about making themselves comfortable and putting their feet up, literally. My husband, who is naturally far more orderly than I am, considers the extra scouring to be “socialized BS.” He and I both agree at heart with New York Magazine’s Stella Bugbee, who writes that “aspiring to domestic perfection can be…detrimental to our sense of happiness and our sense of success.”

But the problem also comes back to gender. No one is out there telling my husband or my brother that they “don’t keep a nice home.” I’m the one who has to bat away a voice in my head, usually sounding like a Jewish grandmother, saying that about me. Hence the pre-guest scrubbing. (Also, I’m pretty sure that even if my guests enjoy my home being comfortable, they’d prefer a clean-ish bathroom.) Furthermore, though I’m lucky to live among men who pretty much don’t care when they say they don’t care, most men are accustomed to a life in which the cleaning gets done for them. They might not notice mildew as soon as women do, but wouldn’t be thrilled if the mildew multiplies.

I compare this quandary to the ones women face about not wearing makeup or neglecting to shave their legs. Men say they don’t understand why women bother so much with grooming, but studies show that women who wear makeup are viewed as more competent. And I’d guess most men, including job interviewers and clients, are probably wrongly affronted by body hair on women, but affronted nonetheless.

Norms corral our behavior simply by existing. Just as the social onus to be physically well-kempt and not offend beauty standards falls primarily on women, so does the expectation to be clean. Thus the consequences for our non-conformity are higher — like getting stared at in the subway or sneered at by visitors. Men who don’t clean or shave are seen as eccentric guys who march to their own drummers; women are gross, or slobs, or have something wrong and unwomanly going on. So sure, we’re “free” to let our armpits grow hairy and the dishes pile up, but we’re not really free. That’s why any loosening of supposedly self-imposed standards, which I’m 100% for, has to be accompanied by a genuine change in mindset by the people who even passively enforce those standards in society — men (ahem!) most definitely included.

A Slob Takes on the Gendered Cleaning Debate