Even Women of Holocaust Get Blurred 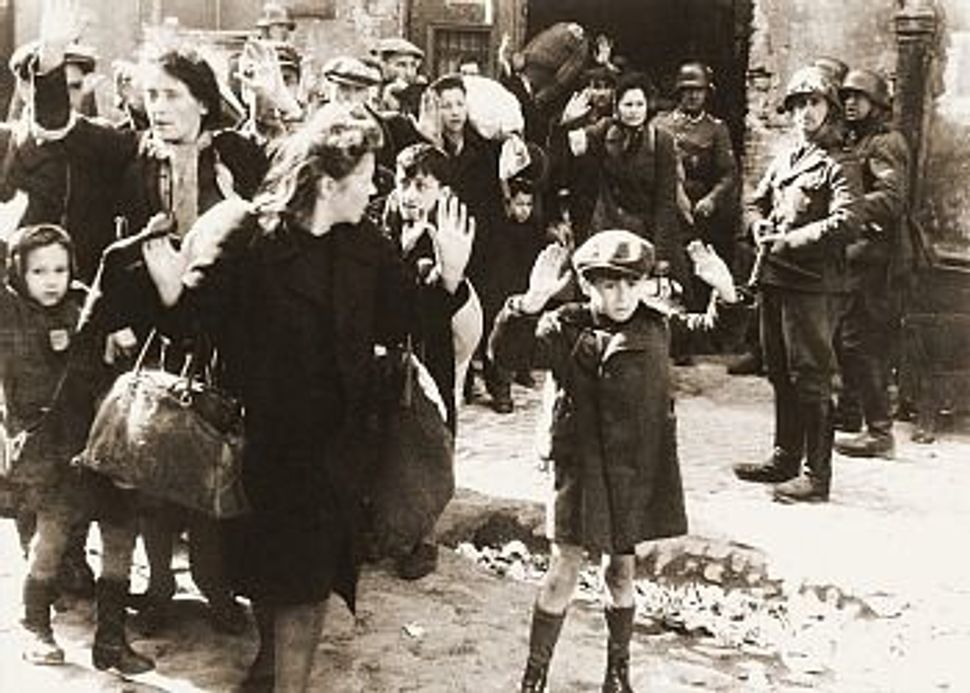 The Sisterhood has covered Haredi exclusion of women from the Israeli public sphere for some time now. When it comes to the removal of women’s images from public view, we’ve seen the disappearance of women from advertisements; the photoshopping of female leaders like former Secretary of State Hillary Clinton out of news photos; the blurring of women’s and girls’ faces on memorial notices and even the erasing of a pair of women’s shoes from an innocuous photo of a family’s shoe drawer.

But now this practice has reached a high — or, rather low — point with the blurring out of the face of a woman in a Holocaust-era photo. Ynet reported that the Haredi newspaper “Bakehillah” (In the community) censored the face of Matilda Goldfinger, the woman who appears to the left of the little boy wearing a yellow star with his hands raised in the iconic photo documenting the final liquidation of the Warsaw Ghetto in May 1943, following the Jewish uprising there that began on the first night of Passover that year. Goldfinger’s daughter Henka (Hannah) was killed moments after the photograph was taken.

The paper ran the photo with a story profiling Aryeh Ludwig Simonson, who is one of the five men who claim to be the boy in the iconic photo (historical researchers have been unable to definitively identify the boy). Simonson is a retired former El-Al employee living in London.

In response to inquiries from Ynet, Avraham Dov Greenboim, editor of “Bakehillah,” said the blurring of the woman’s face was appropriate, given that the article was focused on the little boy. “In addition, we honor the memory of victims of the Holocaust, and we also respect our readers and only put in front of them what they need and want to see,” he said. The paper, along with other Haredi publications, operate under the watchful eye of a “spiritual commission” that ensures “modesty.”

I didn’t think the modesty police could stoop any lower than erasing the face of a female terror victim, but now they have done just that with the blurring of the face of a woman who was the victim of terror on a genocidal scale.

I just have two questions for those who are committing this assault on women’s dignity. First, how exactly is it that you are honoring the memory of a dead woman — murdered by the Nazis — by implying that her appearance serves as an inappropriate sexual temptation to men? And are you going to continue with this horrendous practice until you have totally erased women out of recorded Jewish history — past, present and future?

Even Women of Holocaust Get Blurred